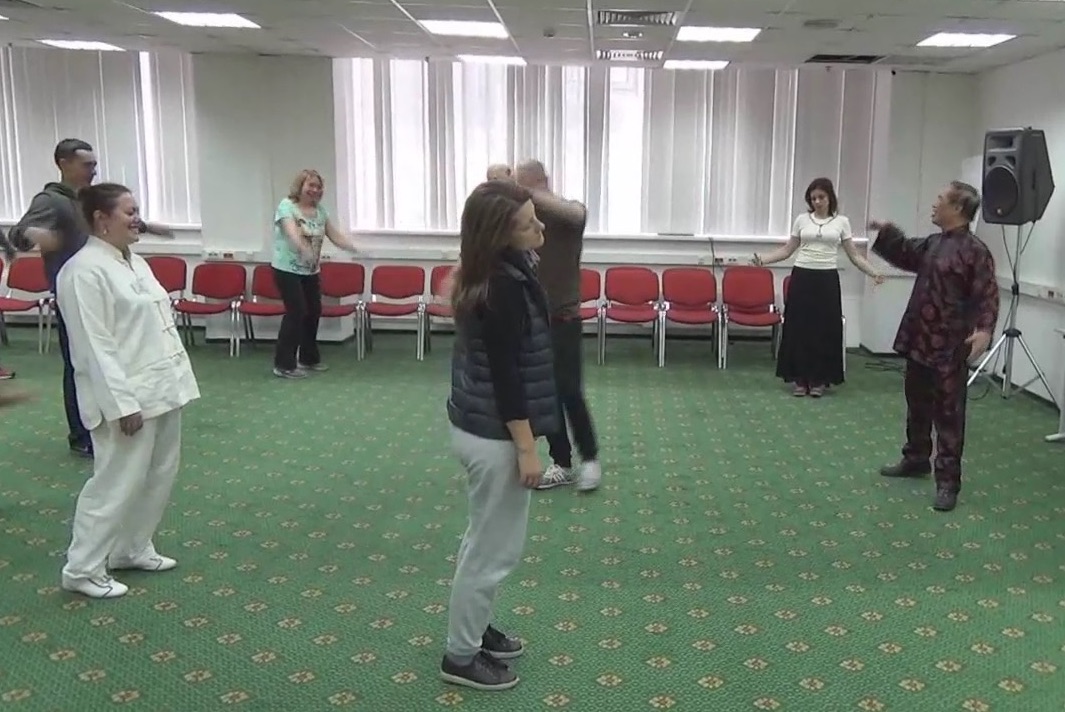 The difference between genuine chi kung and gentle physical exercise

Working on the physical body can provide loosening of muscles and joints, balance and relaxation, but it cannot overcomne illness, maintain good health, increase vitality, promote longevity, enhance peak performance and provide happinessness and peace, but genuine chi kung can. Hence, those who practice gentle physcial exercise, but mistakenly call it chi kung, may have elegance and balance, but they cannot overcome illness, and have other chi kung benefits.

The techniques practitioners use in their practice of gentle physical exercise are chi kung techniques. Some common techniques they use are "Lifting the Sky" and "Carrying the Moon", which are taken from the sets of chi kung called 18 Lohan Hands or from 8 Pieces of Brocade. As they only practice gentle physcial exercise although they call it chi kung, they do not derive any chi kung benefits like good health, vitality and longevity. If they have good health, vitality and longevity, it is because of other reasons, and not because of their practice.

Most of the practitioners do not know this fact, and they may indignantly say that theirs is genuine chi kung. Some of the practitioners are world-known "masters" and hold important posts in chi kung associations. Certainly, making such a statement may anger some people, but it is just the truth.

There are many reasons why genuine chi kung degenerated into gentle physical exercise. A main reason is that genuine chi kung was rare in the past, but suddenly it became popular. Much of the popular chi kung used form to generate an energy flow. In other words, practitioners practiced chi kung forms many times, and gradually generated some energy flow. Over time, the skill of generating an energy flow was lost, and only the external form remained, especially when practitioners did not differentiate between skills and techniques.

This situation of performing chi kung techniques as gentle physical exercise and not as chi kung, may cause many problems. Chi kung practitioners in general do not realize that they do not practice genuine chi kung, even though their lineages and techniques are genuine. Hence, they do not derive any chi kung benefits.

Secondly, when researchers want to conduct experiments on chi kung, they normally approach chi kung associations or national federations. These associations and federations are controlled by office bearers who practice gentle physical exercise using chi kung techniques, usually without their knowing. Hence, the result of such experiences do not reveal what genuine chi kung can do.

How do we know we practice qigong and not gentle physical exercise? 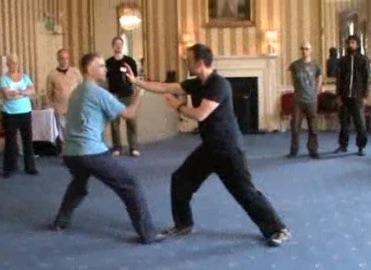 I am sure that today is treating you well! Things have been going very well for me in Florida. Every day, I get many opportunities to experience the benefits of our training, especially in the hospital and emergency department setting, where having a lot of energy and fast decision-making skills are very important.

Some days, I wonder how anyone can function in high-stake settings without the ability to relax. Learning to relax and entering a qigong state of mind feel to me as though they were the gateway to all of my successes in the past several years.

Thank you so very much again for having made it your mission to spread the Shaolin arts to the world! It is truly astounding just how much we all benefit from your work.

Not only today, but everyday treats us in Shaolin Wahnam very well. It has to be so when we practice our Shaolin Wahnam arts. It is not only supported by philosophy, but by the practical experience of our Family members.

It is wonderful to spread our Shaolin Wahnam arts irrespective of race, culture and religion. Those who do not believe us, or think they are smarter, is their problem, not ours.

I have a few questions regarding my practice and was hoping to benefit from your wisdom and advice. At the Cosmos Palm course in New Hampshire, we finished performing Pushing Mountains and held our arms stretched out forwards with our palms facing upwards, "carrying a big beautiful ball of energy" for a period of time. Is there a particular recommended amount of time to hold this posture? I thought I remembered Sifu mentioning that we could hold it for a short while and then build up to an hour or more, but wanted to make sure my memory was accurate.

Your memory is correct. We can hold our outstretch palms facing upward for a short while and them build up to an hour or more if we want to develop internal force. But be careful of over-training.

If we just want to be healthy, we can perform Pushing Mountains without out-stretching our palms. Our arts are versatile, like a physical mixture, not a chemical compound. 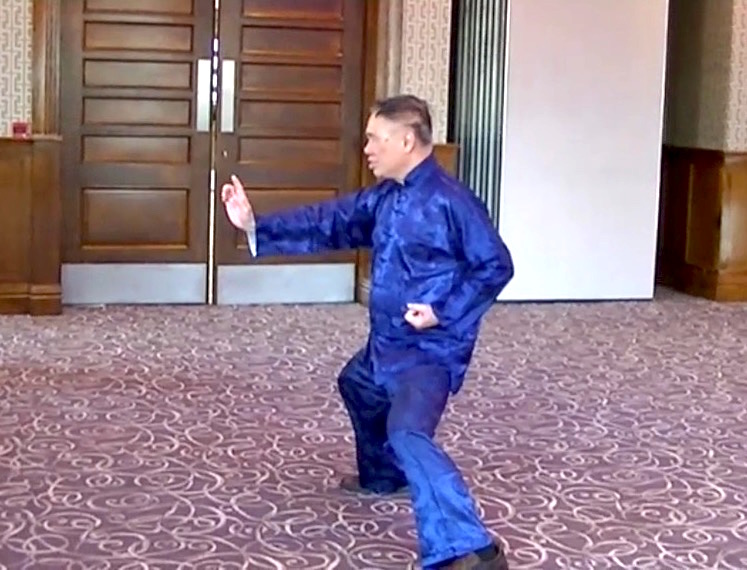 I also have a question about the nature of force training sessions that combine consolidation and flow. I have been lucky enough to learn Baguazhang zhan zhuang and Cosmos Palm from you, both of which have portions which emphasize consolidation (e.g. Carrying Sun and Moon, Forceful Big Windmill, or a Baguazhang stance) as well as flowing (e.g. Pushing Mountains, Circle Walking) in the same training session. Is there a particular advantage or difference in the order of flowing and consolidation, for example if someone were to practice a flowing pattern first and then consolidation, or vice versa?

Relatively speaking, consolidation is for combat, and flow is for health. Needless to say, both are excellent for combat and health if we perform the skills correctly.

Actually, in your and most Shaolin Wahnam members' case, it does not matter much whether you perform the flow or the consolidation first. You will have both health and combat efficiency. The difference is marginal.

Are there long-term consequences or considerations for a practitioner's health? What about when the techniques used are the same, but the emphasis is changed between flowing and consolidation, for example in One Finger Shooting Zen when we might focus on enhancing the amount of flow and then consolidate the flow into internal force?

We may sound boastful, but in the case of Shaolin Wahnam students who have the correct skills, there are no long-term consequences or considerations for their health. They have to guard against over-training, which is our problem, if they want to consolidate for combat efficiency. 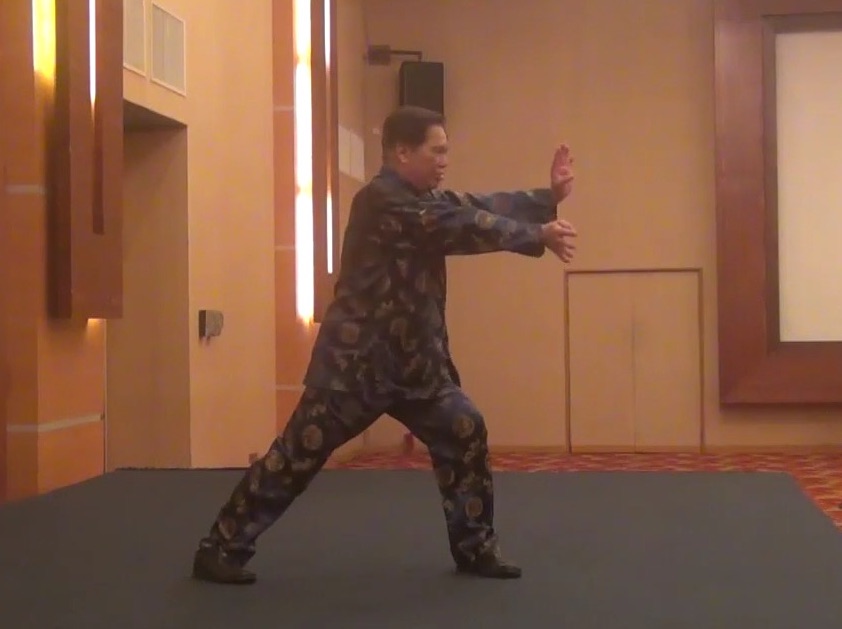 My own paltry experience has been that starting with a consolidating pattern followed by a flowing pattern often results in the internal force developed feeling much more powerful and an extremely sharp sensation of mental clarity, while starting with a flowing pattern followed by a consolidating pattern leads to my qi flowing at a deeper, subtler level and my mind being much more calm. As I am still quite young, however, I do not have the direct experience to say if this would influence someone's long term health and longevity.

Both your performance and observation are not only correct but excellent. Right now you have health and vitality. When you grow old, you will have longevity.

I really don't mean to be boastful, but I defeated masters and professional fighters in free sparring. I acquired my combat efficiency the long, hard way in more than 30 years.

At first, I fought smart. I picked opponents whom I knew I could defeat, and I practiced sequences in anticipation of how they would fight.

After many years, especially after learning from Sifu Ho Fatt Nam, I could defeat opponents off-hand because I was accurate, forceful and fast. I have summarized my more than 30 years of fighting experience into the 30-opponent programme and an ever-winning strategy.

The sequence that comes to mind in the 16 Basic Shaolin Kungfu Combat Sequence is Sequence 10, which is Single Tiger, Fierce Tiger, Thrust Kick and Poisonous Snake. Many years ago I taught Douglas in about 5 minutes, and every time he applied it he drove a free sparring expert who taught combat to commanders, to a wall.

The first combat sequence of Tantui is ever-winning. When you have the right skills, you can apply it no matter how your opponent responds! I learn its combat efficiency many, many years ago from a junior classmate, who later became the Grandmaster of Georgetown Chin Woo Association in Penang. A karate master was badly beaten by a senior student who just applied this sequence. The senior student did not have any sparring experience before!

The combat sequence in four directions of the Cosmos Palm set after force training, which consists of Single Tiger, Green Dragon, Fierce Dragon and Dark Dragon, looks simple but are very effective if you have the combat skills. The starting Single Tiger may be used to close an opponent before striking him.

If I were to pick just one pattern, I would pick the famous Shaolin Butterfly Palms in the pattern, Double Butterflies Flying Together. It strikes an opponent as soon as he makes a move! Interestingly, I have never used it in my combat. You will learn the famous Shaolin Butterfly Palms, amongst other miraculous techniques, in the coming Essence of Shaolin course. (This question was asked before the Essence of Shaolin course in December 2017.)