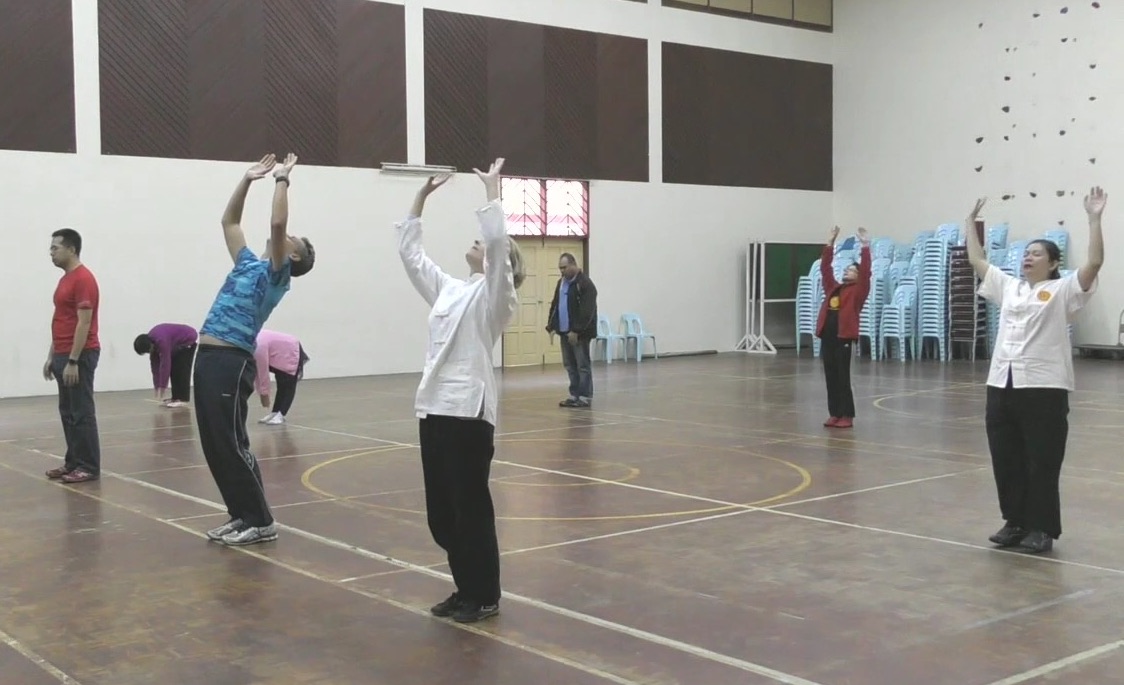 "Carrying the Moon" during an Intensive Chi Kung Course

Thank you for this interesting question.

Using the same chi kung exercises to overcome a variaty of illness is not sensible in the Western medical paradigm, but in the Chinese medical paradigm it is reasonable and scientific.

From the traditional Chinese medical philosophy, the philosophy that has maintained the health of the biggest population of the world for the longest period of history, there is only one cause of diseases, and it is energy blockage. It there is no blockage, i.e. if chi, or vital energy, flows harmoniously, there will be no illness. Good health is a natural birth-right.

I have used this principle to help countless people to overcome their illness. When different people with different diseases come to see me for healing, I do not see them as suffering from asthma, diabetes, heart problems, rheumatism, depression, anxiety, viral infextion or any disease described variously by Western medicine, I see them as suffering from energy blockage.

The same reality occurs in Western medicine, or any medicine too, though those familiar with Western medicine may not see it in the same way. If all the systems, organs, issues, glans and cells work the way they are meant to work, no illness will occur. Chinese medical philosophy describes this concept as harmonious energy flow.

Those who wish to overcome their illness, should focus on the basic, which is generating energy flow. This is what I teach on the first day of my three-day Intensive Chi Kung Course.

On the second day, I teach developing internal force and attaining mental clarity, which contribute to peak performance. On the third day, I focus on spiritual cultivation at the highest level, i.e. expanding into the Cosmos.

The three-day Intensive Chi Kung Course is divided into three levels, namely for health, for peak performance, and for spiritual cultivation. The amount of energy needed for their attainment increases accordingly. In other words, least energy is required for health, more energy for peak performance , and the most energy for spiritual cultivation at the highest.

Overcoming illness needs even less energy. Teaching a sick person an advanced chi kung exercise, which will produce a lot of energy, is detrimental to him. It is like asking a sick person to lift weights or run a marathon. 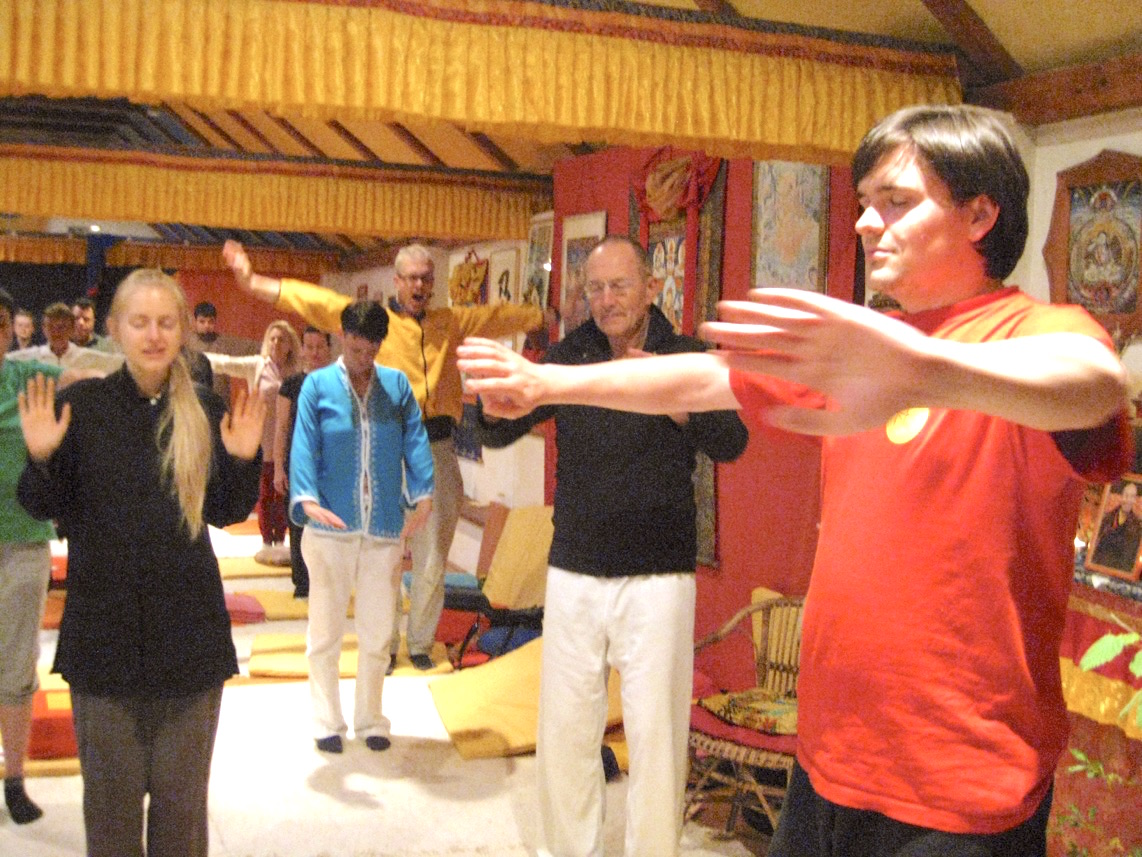 One of the exercises in 18 Lohan Hands, "Separating Water"

As early as 20 years ago, in 1997 at the 2nd World Qigong Congress in San Francisco, I was awared Qigong Master of the Year. (Chi kung is spelt as "qigong" in Romanized Chinese.) A main reason for the award was my work in helping people overcome so-called incurable diseases, like cancer and heart problems. In fact, the paper I presented at the Congress was Qigong: a Cure for Cancer and Chronic, Degenerative Diseases? A Global Interest.

Honestly, I am not keen in helping people overcome so-called incurable diseases. I take it as a duty. I prefer teaching chi kung and kungfu to healthy people.

The second reason is that there are legal rules forbidding healers other than qualified Western-trained doctors to treat paients, though some far-sighted countries are now relaxing such rules.

How are kungfu sets related to Eighteen Lohan Hands and Sinew Metamorphosis?

Most people, including kungfu practitioners, may not realize that their kungfu sets are related to Eighteen Lohan Hands and Sinew Metamorphosis. They may not see any Eighteen Lohan Hands techniques or Sinew Metamorphosis techniques in their kungfu sets, such as in Shaolin Tantui, Wing Choon Kungfu, Yang Style Taijiquan, Swimming Dragon Baguazhang or Five Elemental Fist of Xingyiquan.

Some patterns like "Big Boss Lifts Bronze Vessel" in Choy-Li-Fatt Kungfu, and "One-Finger Stabilizes Empire" in Hoong Ka Kungfu, can be traced directly to Eighteen Lohan Hands patterns, like "Lifting the Sky" and "Shooting Arrows".

While the Eighteen Lohan Hands evolved into Eighteen Lohan Fist which became the prototype of Shaolin Kungfu, Sinew Metamorphosis provided the source and inspiration for internal force training in many kungfu sets. Again, because of their long history, it may not be easy to trace their relationship.

Another excellent example is the triple-stretch method used in internal force training in many Southern Shaolin sets, like Dragon Strength, Flower Set and Siu Lin Tou of Wing Choon Kungfu. Some arts, like the Thirteen Grand Guards famous in Ngok Ka Kungfu (Yue Jia Kungfu in Mandarine pronounciation) was derived from Sinew Metamorphosis. 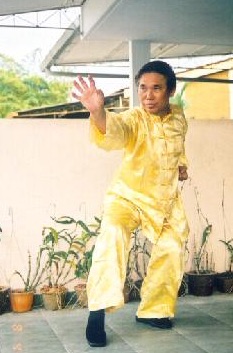 Why does a senior practitioner who attended a course previously still attend a same course?

It is because he gets a lot of benefits from the course, besides seeing me and his friiends.

For example, in learning "Lifting the Sky", junior practitioners will focus on the techniques, like how to lift their hands, and whether their arms are straight. Senior practitioners already know the techniques very well, so they focus on the skills, like how gently should they breathe in and out, and at what level of performance should they choose to operate so as to get the best benefits.

In a kungfu course, for example, in learning to apply "Single Tiger Emerges from Cave" to defend against "Black Tiger Steals Heart", junior practitioners will focus on the techniques, like "leaning" and not "blocking". Senior practitioners already know the techniques, so they can focus on the skills, like at what point of time should they defend against the attack, or at what point of space should they "lean" on the opponents' arm.

It is not that when the senior practitioners first learned "Lifting the Sky" at a time when they were junior, these fine points of techniques were not taught. At that them they just wanted to perform the pattern correctly, without worrying about details.

Similarly, senior practitioners learn more about the philosophy of the art. They would learn, for example, that "Lifting the Sky" not only generate a chi flow, which was their main concern at the time they first learned the pattern, but also it would give them good posture and help them to free their mind from other thoughts.

In Taijiquan Pushing Hand, the right mode, i.e. right hand and right stance, is used. Why is it that in Wing Choon Chi Sau or Sticking Hand, both hands are used?

As an analogy, it is like asking why we use two hands to type, but only one hand to write. It is because typing and writing are different arts with different principles. 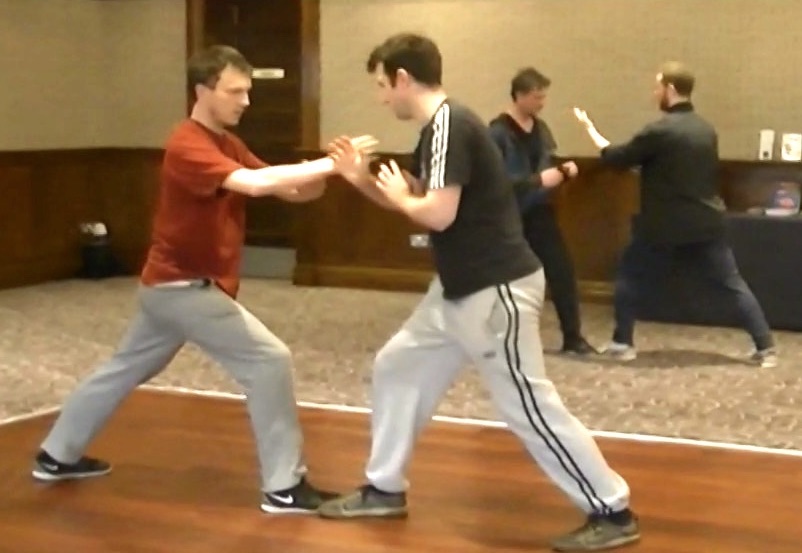 What are the symptoms of over-training?

Being tired, pain and feeling nauseous are the three very common symptoms of over-training.

A practitioner will feel energized when he has practiced chi kung. But if he feels tired instead, it is a symptom of over-training. He feels tired because he has generated too much energy that his physical body cannot bear it. This tiredness is different from having not enough energy. It is Nature's way of telling him to rest.

He should feel fresh after practicing chi kung, but if he feels painful, it shows over-training. The energy he has gathered from his training is too much that it pushes too hard on his thick blockage making him feel painful. If he has practiced less or less intensely, the energy gathered is less and the push is gentle.

What should we do if we have over-trained?

In other schools where students practice for about an hour per session, a good way to overcome over-training is to practice less, like half an hour instead of an hour, or alternate day instead of every day.

Reducing the time of training is not feasible in our school because our practice session for chi kung is short, just about 10 minutes. More significantly, our students enjoy their practice. For those who practice kungfu, the earlier recommendation was an hour. They can reduce their practice time to half an hour.

If you practice at 60% or 70%, you may over-train, and have adverse effects instead of benefits. By practicing at 25% or at an level suitable for you, you get the best results. If you find that you still have over-trained when you practice at a lower level of performance, you may adopt negative action. A good method is to purposely intellectualize. When you intellectualize, your result will be less, but it is the best for you.

Another method is to purposely tense your muscles. Again, your result will be less, but it is good for you if you have over-trained. Have a gentle chi flow at the end of the session to clear the harm caused by your purposely tensing your muscles.