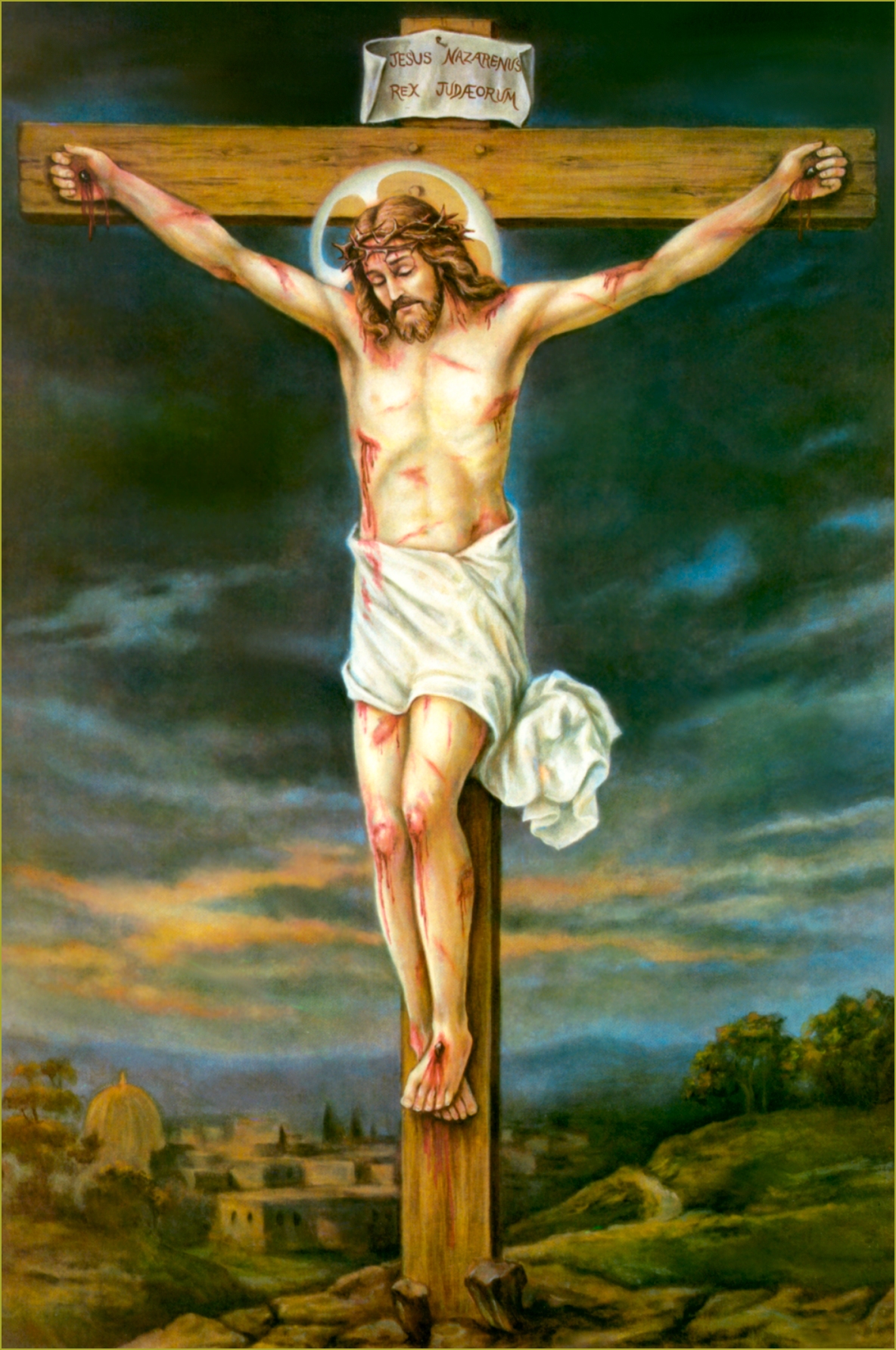 There are two ways in which Jesus Christ is typically portrayed: 1. Jesus radiating divine love, the sacred heart of Jesus, and 2. Jesus on the cross being crucified.

I have always struggled with both the image and idea of the Crucifixion for it is nothing less than the sadistic murder of one of the greatest masters to have walked the earth. While of course the subsequent resurrection of Jesus is the central tenet of Christian theology, the crucifixion as an event in itself is seemingly the source of much worship and prayer in the Roman Catholic Christian tradition.

What is the spiritual significance of the crucifixion? What wisdom/guidance/divine truth related to the crucifixion can we integrate into our daily lives to benefit us and those around us?

What is the spiritual significance of the Resurrection of Jesus Christ? Is it very much missing the point to see the crucifixion and resurrection as two separate event as I seem to be doing?

These two ways of portrayal of Jesus Christ manifest the two cardinal values of Christianity -- love and faith. It is through Jesus' love and faith in Jesus that humanity is saved.

Many people may not know that crucifixion did not apply only to Jesus Christ. It was a form of capital punishment in the past, especially by the Romans, for serious crimes until the accused died a slow and horrifying death.

Jesus Christ was tried and he died on a cross on Good Friday. Three days later, on Easter Sunday, accompanied by earthquakes and splitting or rocks, he rose and ascended to heaven.

Understandingly, many people are appalled by the cruelty of crucifixion, but Jesus' crucifixion provided tremendous inspiration and meaning to the world. Jesus made a great sacrifice. He died for the sake of his people, and his passing words, "Father, forgive them, for they know not what they do", spoken with great sincerity before he died on the cross, are a shining hallmark of forgiveness and compassion.

The spiritual significance of Jesus' crucifixion is love and faith, for all people irrespective of whether they are Christian. Jesus' love for his people, who were not called Christians then, was so great and unconditioned that he was ready to die on the cross. Christians' faith in Jesus is so deep that they will be reborn in heaven.

Love and faith as well as forgiveness and compassion, highlight the wisdom, guidance and divine truth related to Jesus' crucifixion that we can integrate into our daily life to benefit ourselves and those around us. People don't have to be Christian to have these benefits. The benefits are universal.

On the other hand, we should guard against blind faith. Using blind faith to subjucate others or to cause suffering is certainly wrong in any religion or culture.

Jesus Christ' crucifixion and resurrection should be seen together, and not as separate events. Seeing them separately is missing the point. The point is Jesus Christ's great love for the people, and they will have salvation by following his teaching.

Sifu, what is the Chinese term for clearing the mind of all thoughts?

The characteristic Chinese term is "wu nian", which means "no thoughts". It is often used in Zen literature. 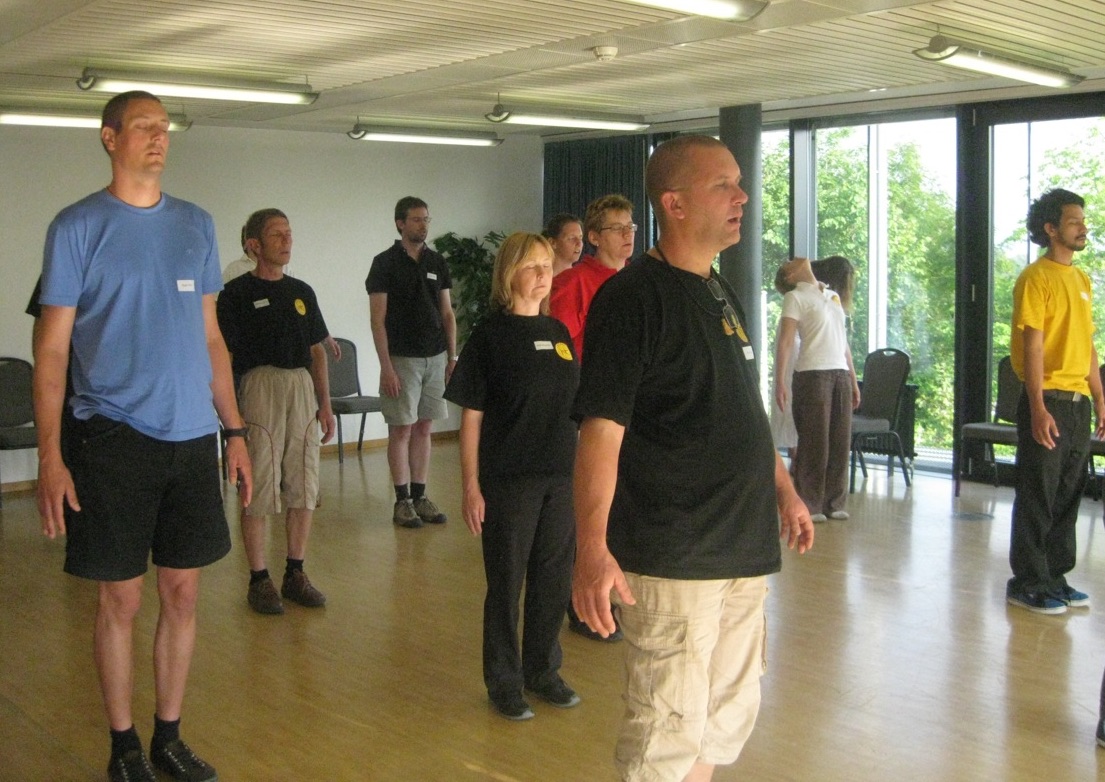 Do you think Westerners will have problems with the term "no mind"?

Yes, many Westerners have problems with the term "no mind", which is "wu xin" in Chinese. "Wu xin" literally means "no heart", and is widely used in Zen literature. In classical Chinese, "heart" usually means "mind".

Of the four combat sequence taught at the kungfu course at the UK Summer Camp 2016, which are the combat sequences of Shaolin Lohan Kungfu, Taijiquan, Baguazhang and Xingyiquan, how would sigung rate them in ascending order in their difficulty.

In their relative difficulty, I would rate the four combat sequences according to an acceding order as follows: Shaolin Lohan Kungfu, Taijiquan, Baguazhang and Xingyiquan.

The reasons are as follows. Relatively, the combat sequence of Shaolin Lohan Kungfu is the easiet. An exponent uses his arms like iron rods to strike the arms and legs of an opponent as the opponent attacks. If the opponent hesitates, the exponent strikes the opponent's body and closes him to attack him.

The Xingyiquan combat sequence looks and is simple, but its combat efficiency is profound, and it requires very high level of skills to apply the sequence safely and effectively. The exponent has to be very skillful in his spacing, timing and coverage. During the course, when I applied it on Mark (Sifu Mark Appleford), who himself is an excellent fighter, Tim (Sifu Tim Frankflin), another excellent fighter, spontaneously commented that it was "unfair" because it gave Mark no chance to escape my attack. Another person using the same techniques but without the high level skills, would be easily beaten by Mark. 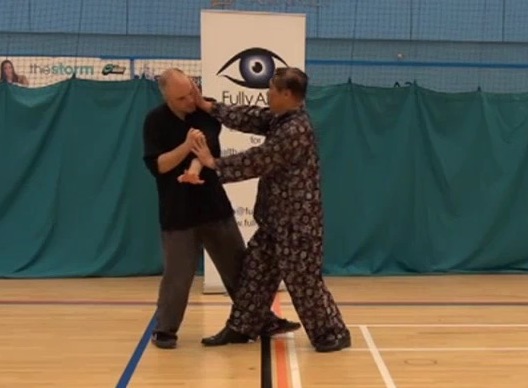 Which one of the four combat sequence sigung prefers to use the most, and why?

Theoretically I would prefer to use the Xingyiquan sequence the most. It is because this sequence is the most effective, ends combat the quickest, and I have the necessary skills to apply it successfully.

But from actual experience, of the four combat sequences the one that I have used the most is the Taijiquan sequence, although the patterns were usually from Shaolin Kungfu rather than from Taijiquan.

I did not use the Shaolin Lohan Kungfu sequence often because doing so would hurt the opponent. The Taijiquan sequence gave me better control.

In free sparring or actual fighting, if I did not break an opponent's arm or really strike his body as in the Shaolin Lohan Kungfu sequence, he would continue to fight me. But in the Taijiquan sequence, I could control the opponent and press him to a wall or fell him onto the ground with my strike stopping an inch from target.

I did not use the Bagauzhang or Xingyiquan sequences because, looking back at my sparring and fighting days, I was better trained in Shaolin Kungfu, and the Shaolin techniques, though in the spirit of the Taijiquan sequence, had served my purpose very well. Perhaps in future, I may use more of the Baguaznang or Xinyiquan sequences.

What are the fundamental skills of chi kung? In other words, what are the skills that any practitioner must have if he wants to practice chi kung?

There are three fundamental skills of chi kung. They are to be relaxed, to free the mind of irrelevant thoughts, and to generate an energy flow. If any one of these skills is missing, a practitioner will not be performing chi kung, though he may use genuine chi kung techniques.

This, in fact, is the situation of more than 80% of chi kung practitioners all over the world, including in China today, and including some well known masters and well known practitioners who hold important positions in chi kung organizations. This is a sensitive issue, but I am mentioning this in good faith.

How do we determine whether the art someone practices is genuine chi kung. Actually this is very simple and effective, and it is indeed shocking that may people do not recognize it, or refuse to recognize it.

Why is this so? It is because they lack the fundamental skills to practice chi kung, although the chi kung techniques they use are correct. They are not relaxed, have not free their mind of irrelevant thoughts, and are unable to generate an energy flow. 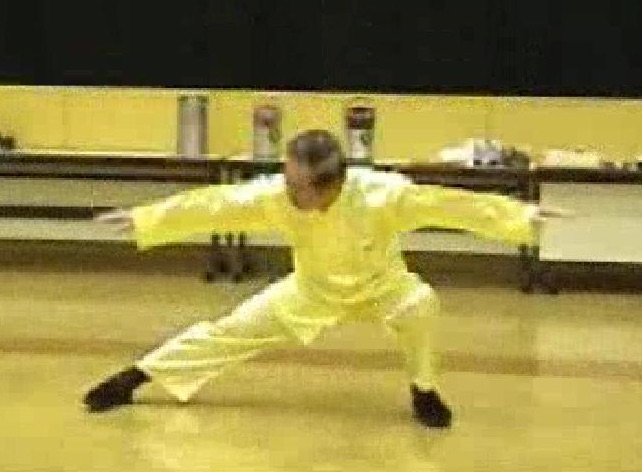 What are the advanced skills besides these fundamental skills?

The two fundamental skills of chi kung are entering into a chi kung state of mind, which includes being relaxed and being free of irrelevant thoughts, and generating an energy flow. They are fundamental because without any one of them, a person does not practice chi kung even when he performs genuine chi kung techniques.

This, in fact, is the situation of more than 80% of chi kung practitioners today, though they may not realise it, or even not realise what it means because they do not know the difference between performing genuine chi kung techniques as chi kung or as gentle physical exercise.

An analogy may make this statement clearer. Many Taijiquan practitioner today do not know the difference between performing genuine Taijiquan patterns as Taijiquan, which is an internal martial art, or as Taiji dance, which is performing external Taijiquan form gracefully and slowly.

Besides the fundamentals, the advanced skills of chi kung may be classified into three categories for convenience:

Some of the effective techniques or exercises to achieve the above skills are as follows:

What benefits can a practitioner get by practicing chi kung?

For convenience, the many benefits of genuine chi kung may be classified into three categories:

To be healthy, a practitioner needs to be free from pain and illness. Thus, overcoming pain and illness is a stepping stone. Many people today practice chi kung to overcome pain and illness. It is a pity that many of them merely perform chi kung techniques as gentle physical exercise which does not give them the benefits they want.