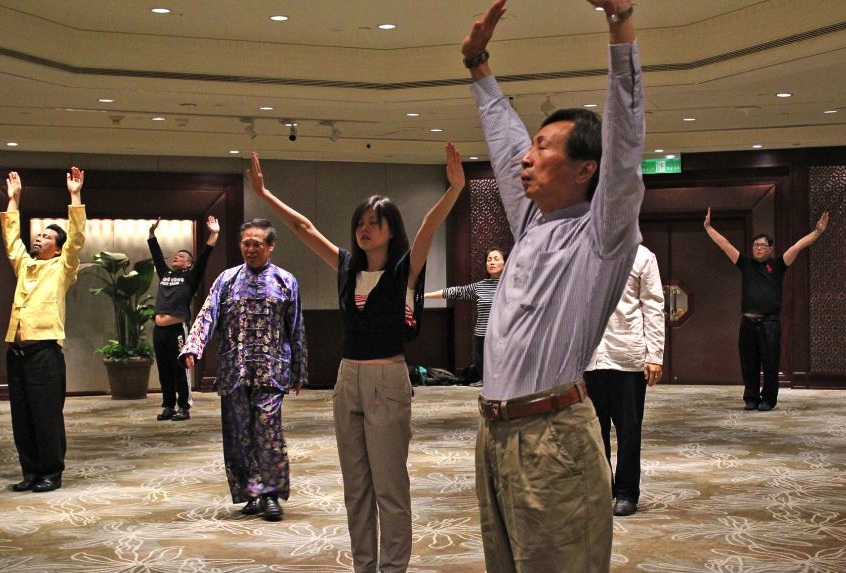 Students' safety is a top priority in all our classes

My Sifu told us in November about the sexual assault cases and the concerns about it not being properly addressed.

In any case you would still address your sifu as "Sifu" unless, which I certainly would not advocate, you do not recognize him as your sifu.

Whether these cases were sexual assaults is a matter of opinions. Here is an example where opinions are more important than facts.

According to your sifu and those who resigned from our school or resigned as instructors but remained in our school, these cases were sexual assaults, and they were not being properly addressed. These are their opinions.

According to me and many instructors and students in our school, these cases were not sexual assaults, and we have handled the cases as best as we could. These are our opinions.

Some instructors and most students in our school may not know of these cases. Some may have heard only one side of the case, and were persuaded to believe the unproven accusations as facts. My Statement on Accusations and Allegations of Sexual Abuse is to present the facts concisely.

Had the accusations been proven, i.e. if the sexual assaults were facts and not just opinions, we would certainly have acted differently.

Whether the way we have acted was good or bad was also a matter of opinion. Your sifu, for example, did not have any evidence. If he had, he did not tell me or any of our instructors even in confidentiality. He just believed the accusations were facts. Antonio Colarruso and Rama Roberto, the instructors who resigned from our school, and Robin Gamble and Jeffrey Segal who resigned as instructors but remained in our school also did not give me any evidence.

As a female student of this school I am very concerned about how sexual misconduct and misuse of power is handled. Surrendering oneself to a master is putting oneself in a very vulnerable position, and when I do that, I want to be very sure that it is safe.

This is a mark of wisdom, and should be carried out in action, not just in words. One must be very sure of the authenticity of a master, in his art as well as his character, before students should learn from him. Please see my article on Qualities of a Good Master.

Today many students learn kungfu, which is a martial art, or chi kung, which is an energy art, from "masters" who teach only kungfu forms, or use Kick-Boxing for sparring, or "masters" who teach gentle physical exercise without any experience of chi or energy. It is worse if they learn from "masters" who are brutal and lack compassion and wisdom. Hence, personally I am glad that instructors who accept accusations as facts to resign from our school or resign as instructors.

In our school we are very clear about sexual misconduct and misuse of power. We ensure that everyone in our school is safe from sexual, power or any other form of abuse. We are very proud of the fact, not an opinion, that except the woman Anthony Korahais brought to see me, not a single person, male or female, out of more than 60,000 students over 40 years of teaching, has complained to me that he or she has been abused. Even the woman, though traumatized, said that the accused did not force her into sex. But what is most important is that she has healed herself from the past experience, and now lives life joyfully. 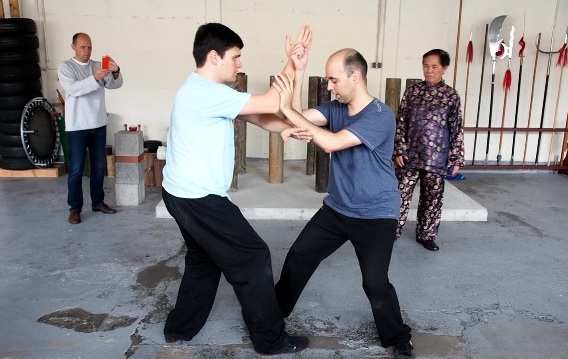 Kungfu is a martial art, not just forms for demonstration

The school states it expects students to follow the ten Shaolin laws, or, to be precise, it says "If he breaks the laws, despite sufficient warnings, he may be asked to leave the Shaolin training, not as a punishment, but because the training is not suitable for him".

In these laws it is stated, among other rules, that it is "Forbidden to rape, molest, do evil, steal, rob, abduct or cheat", "Forbidden to associate with wicked people; forbidden to do any sorts of wickedness" and "Forbidden to abuse power, be it official or physical".

Looking at these laws, and expecting all members of the school to follow them, you would say you would be quite safe.

But since the stories about the accusations on sexual assault came to my attention (which was, in fact, way earlier), I don't feel confident things are handled the way I feel comfortable with, especially making sure the school is a safe environment for men and women alike.

Not just knowing but actually practicing the Ten Shaolin Laws is a requirement to be a student of our school. We can reasonably say that our school is definitely safer than most other kungfu and chi kung schools as well as most other places of learning, including schools, adult classes, colleges and universities, in terms of sexual and power abuse.

But in this case, we must not confuse accusations with facts. This does not mean that the accusations may not be true, but they are not proven. If we were to treat every accusation as fact, we would change our school into a police state, which I am quite sure most people would not want to.

Why isn't this investigated by an unprejudiced outsider?

You would have to ask outsiders why they did not do so. I would guess that apart from the police, outsiders would answer that it was not their business.

As it is questionable whether the accusations like those who resigned from our school had painted them, were true, it is unlikely the case would become a community threat. It is not even a threat in our school, though those who resigned imagined it to be. They told me, for example, that within a year many victims would report to the police, and the case would become a public scandal.

Two years had passed, and even people who live in the same area did not know about the case, and the students of the accused, who were mostly presidents and vice-presidents of international corporations and very sensitive to sexual abuse, continued to learn from him. This suggested that the accusations were not true, or not as serious as the resigned instructors imagined them to be. Indeed, many other instructors in our school have questioned why these fiery accusers had such deep grudges against the accused. 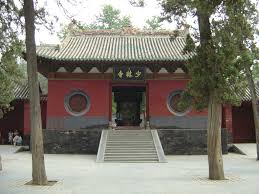 The Ten Shaolin Laws constitute the moral code of our school

For the school itself, it must be important to get to know the truth. Why don't you have this investigated?

Despite being a scientist yourself, you may be so influenced by accusers who bad-mouthed us that you asked such a question. Of course, we investigated the matter. But none of the accusers give me any evidence, they only had accusations. Anthony Korahais brought a woman to see me. She was traumatized but she said she was not forced into sex.

I confronted the accused with the accusations. He denied all of them. He admitted he had sex with some women, but all the relationships were consensual and all occurred outside of Shaolin Wahnam classes. Whom people choose to have consensual sex with, is not my business.

Why don't you agree with the parties involved to someone who could conduct such an investigation, and let this be sorted out?

I am surprised at this question. It is irrelevant because no one in the party involved has ever suggested such an investigation.


Editorial Note: The enquirer's other questions can be found at the February 2015 Part 3 and the March 2015 Part 1 issues of the Question-Answer Series. 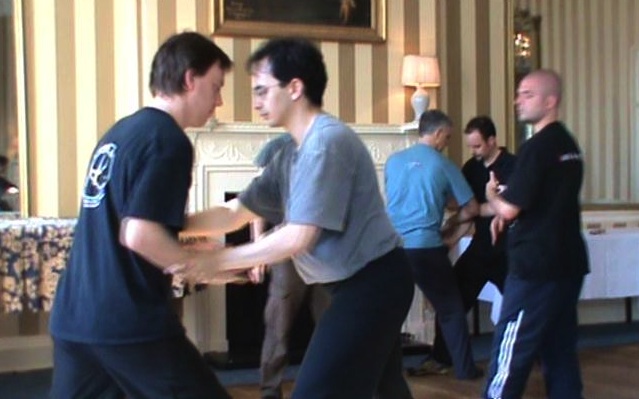 An obscure Baguazhang lineage that I happened upon in a Baguazhang book is that of master Park Bok Nam, whose master was master Lu Shui Tien. Master Park co-wrote a book with master Dan Miller, and the descriptions of the exercises are similarly "hard."

One thing that made me excited about the book (published in the early 1990's) was that it talked about qi flow, internal force, and having a qi flow after practice (though it emphasized storing energy in the palms rather than at the abdomen). I have not seen videos of practitioners of this school, but from what I was able to reconstruct from the book's descriptions and its photographs, the Baguazhang of master Park Bok Nam is quite hard and combative.


Editorial Note: Frederich's other questions can be found at the February 2015 Part 1 issue of the Question-Answer Series.

It is pertinent to point out that "hard" in kungfu context is different from what many Westerners conceptualize "hard" to be. Hard force, for example, can be very flowing, and may not involve any muscular tension.

One thing that I found interesting about this book was the emphasis of rotating the body around a "central axis" (an imaginary line going from bai hui to hui yin) rather than simply turning from the waist.

I experimented with this sort of rotation and found that it improved my range of flexibility and ability to explode force by a noticeable amount. Interestingly enough, my experimentation with this "central axis" method and the body posture it calls for also made me feel as though my internal force were expanding out from my body to make a soft cushion around my body at times.

Thank you for this important discovery, or at least a crystallization of an important principle that many of us may have attained but without realizing it.

As you have found out from direct experience, and which I can confirm with philosophical knowledge, operating from inside out instead of from outside in, will produce better and faster result, making us even more cost-effective.