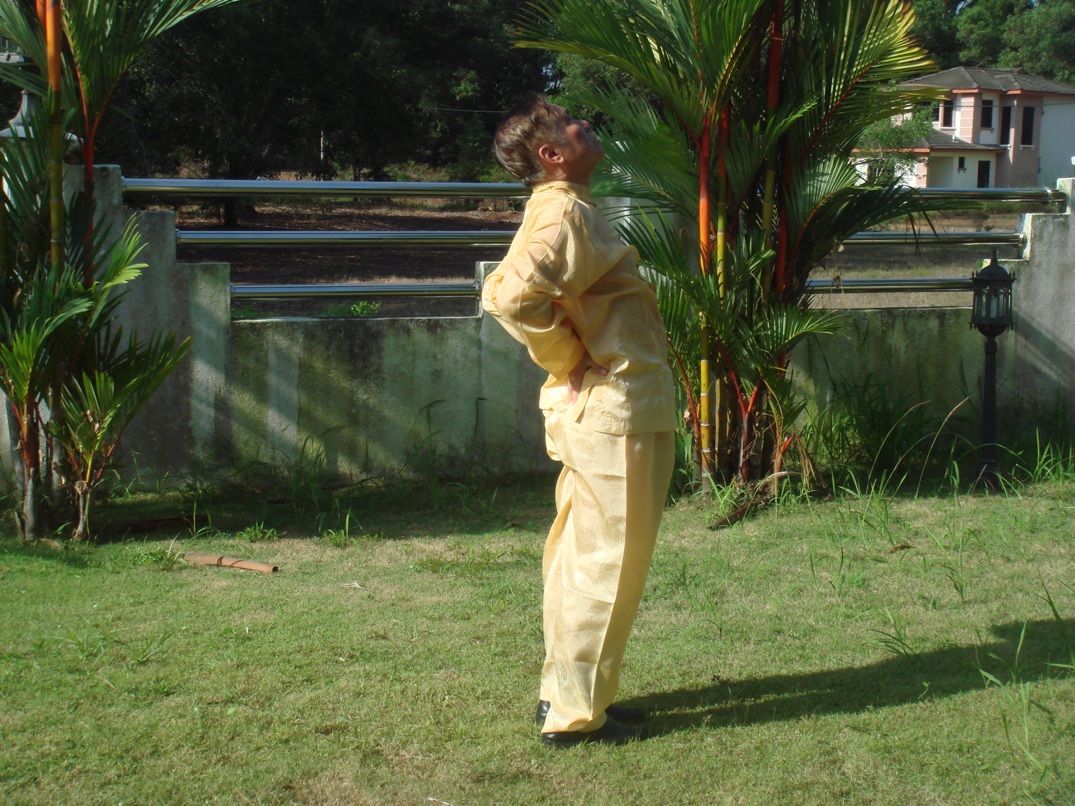 The breathing structure in Nourishing Kidneys is quite sophisticated

How is the breathing done in Shaolin Wanham?

There are many breathing methods in our school. These methods are much more sophisticated than just breathing in and out through the nose and mouth. We choose the appropriate methods for particular purposes.

Besides breathing in and out through the nose or mouth, there are other breathing modes involved, like pause, follow, shoot, explode, sink and swallow, and other factors, like the speed, nature and volume of air or energy taking place, and approaches, like abdominal breathing, reverse breathing and Small Universe breathing.

You may also like to know that the term "breathing" in classical chi kung context is different from that in modern scientific context, a fact many practitioners, including some masters, many not know. In the modern context, breathing means taking in air and giving our air. In the classical context, it is an exchange of energy, not air.

In Abdominal Breathing, for example, it is energy, not air, that goes into and comes out from the abdomen. The lungs are air-tight. If air, instead of energy, goes through the lungs, it would be a big problem for the practitioner.

In most chi kung exercises, the breathing method is breathing in energy gently through the nose, and breathing out energy through the mouth. The mode and pace of breathing, however, vary between exercises.

In most exercises in Sinew Metamorphosis which produce tremendous internal force, the breathing method is "follow", then breathe out loudly but in a relaxed manner. You may be surprised that there is no breathing in. The breathing mode "follow" is translated from the Chinese term "sui", which means "let it be".

In kungfu, depending on various situations different breathing methods are used. Generally the method is "follow", where there is no conscious breathing in and out through the nose or mouth, but energy flows in and out of practitioners' body spontaneously. This is a main reason why our students can spar for hours without panting for breaths, simply because there is no breathing in the modern sense of the word.

Is the breathing method in and out through the nose?

This method is not commonly used, but is sometimes used in meditation when we want our breathing to be slow. 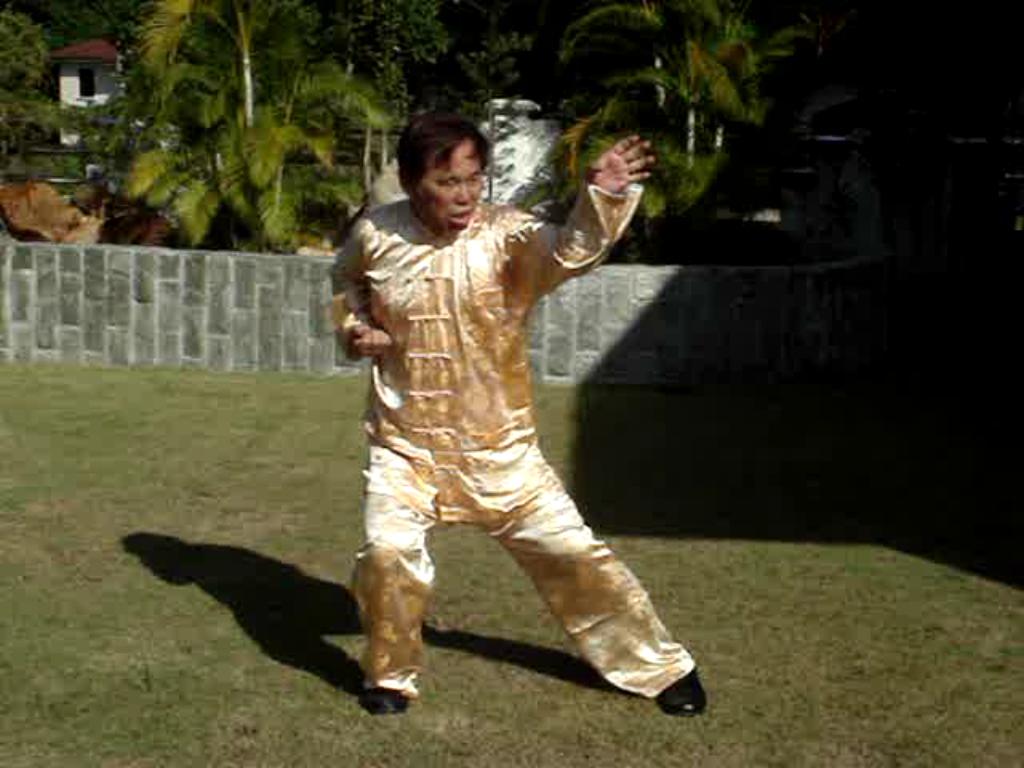 In Wing Choon Kungfu, the breathing is generally in through the nose and out through the mouth

Is natural breathing done through the nose?

It is natural to breathe in through the nose and out through the mouth. But when the term "natural breathing" is used, we refer to spontaneous breathing without any conscious effort to regulate the breath. 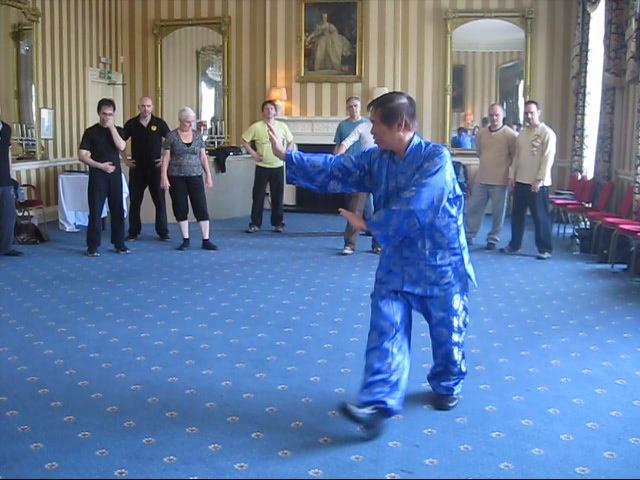 No, it is not a provoked breathing method. It is natural. This means without any special training, a person will breathe in through his nose and breathe out through his mouth.

Is it safe to say that this method is used in hard moving qigong, and is more external?

Breathing in through the nose and out through the mouth is not limited just to hard moving qigong. It is the most common method in many arts, both external and internal. 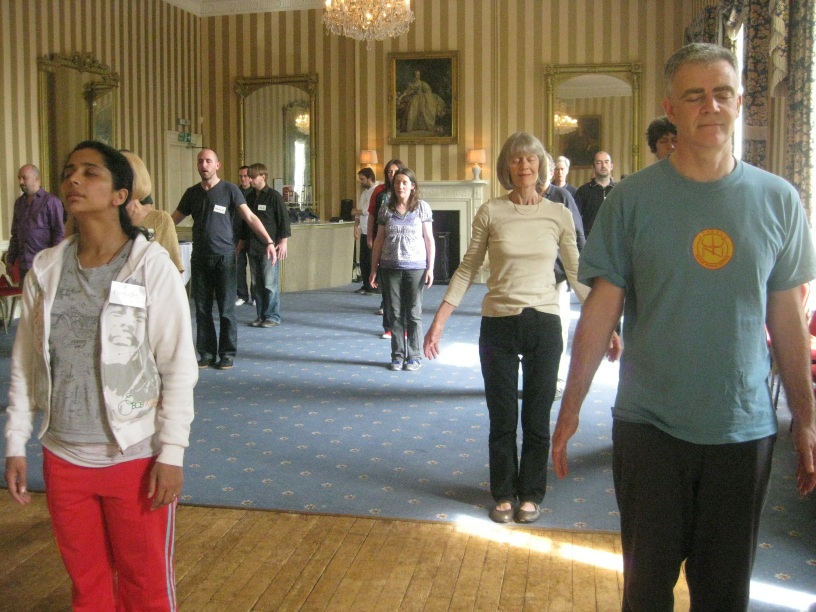 It should be noted that the way we perform Bone Marrow Cleansing with energy flowing at the flesh level is special. We can develop a lot of internal force, but other people performing the same exercise may not. To them energy just flows through their flesh, and even this is a rare attainment.

In our case we not only let energy flow through the flesh, we can also consolidate the flowing energy into internal force by letting the energy soak into every cell of our muscles. We can do this because we operate at the mind level, which is the highest level in chi kung training.

Separating Water is particularly powerful for this purpose. If you use other patterns, the internal force generated is less. Similarly, if you use other stances instead of the Horse-Riding Stance, the internal force generated is also less. Hence, we are comparing the most powerful pattern for the Flesh Level with the most powerful stance in stance training.

A main reason why using Separate Water in the Flesh Level of Bone Marrow Cleansing produces more force than using the Horse-Riding Stance in stance training is because the former operates at the mind level whereas the latter operates at the form level. In other words, we can develop tremendous internal force in the Flesh Level of Bone Marrow Cleansing because we use our mind to tap energy from the Cosmos and let the energy soak into all our cells. In Horse-riding Stance we use an ideal form to let energy from the Cosmos to be collected at our dan tian.

The question has been answered at the beginning. Bone Marrow Cleansing is a rare art. But even if some practitioners manage to learn it, they may not be able to develop any internal force. The Horse-Riding Stance still remains the single most important exercise for internal force training.

Even for us the Horse-Riding Stance is necessary. It has benefits that the Flesh Level of Bone Marrow Cleansing does not have, or at least it has certain advantages over the Flesh Level.

Not many people understand the difference between foundation and internal force, though the two terms are actually self-explanatory. To build foundation means to have good stances and footwork so that when you perform your kungfu movements you are both stable and agile.

Although internal force contributes much to building foundation, one who has internal force may not necessarily have good foundation. In fact, using Separating Water to build internal force in the Flesh Level of Bone Marrow Cleansing focuses the force at the chest, and may cause a kungfu practitioner to be top-side heavy. For us in Shaolin Wahnam, we can channel the energy to our feet if we want to, but not many people have this skill.

Today, most martial artists, unfortunately, lack mental clarity. Perhaps they did not practice the Horse-Riding Stance. Had they some mental clarity, they would have realized that their training not only does not give them the results they desire, but it has made them worse. They cannot defend themselves, or else they would not be routinely hit in free sparring, and they become more unhealthy the more they train!

If you are a kungfu student in Shaolin Wahnam but do not focus on the Horse-Riding Stance, don't worry. The Three-Circle Stance in Taijiquan, the Green-Dragon Stance in Baguazhang (the stance used in Green Dragon Tests Claws), and the Three-Body Stance in Xingyiquan give similar benefits, thought there may be fine points of difference.

Can we have two different levels of chi flow when practicing Bone Marrow Cleansing?

For example, you may have decided to practice Bone Marrow Cleansing at the Skin Level. Having enjoyed chi flowing at your skin, you may decide to channel it to your meridians to flow at the meridian level.

Indeed, you may perform Bone Marrow Cleansing in any way you like. You may, for example, initially let chi flow at your skin level, then progressively flow at your flesh, meridian, internal organ and bone marrow levels. Or you may reverse the order, starting at the bone-marrow, then at the internal organ, meridian, flesh and skin levels. Or you may jump from any one level to any other level or levels in any way you like, not necessarily in ascending or descending order.

You may also combine Bone Marrow Cleansing at one or more levels with other chi kung exercises learned in our school or learned elsewhere.

All these variations are for fun, or for variety. Generally you will get the best benefits by focusing on just one level.

You must also guard against over-training. Bone Marrow Cleansing is very powerful. It is easy to over-train.