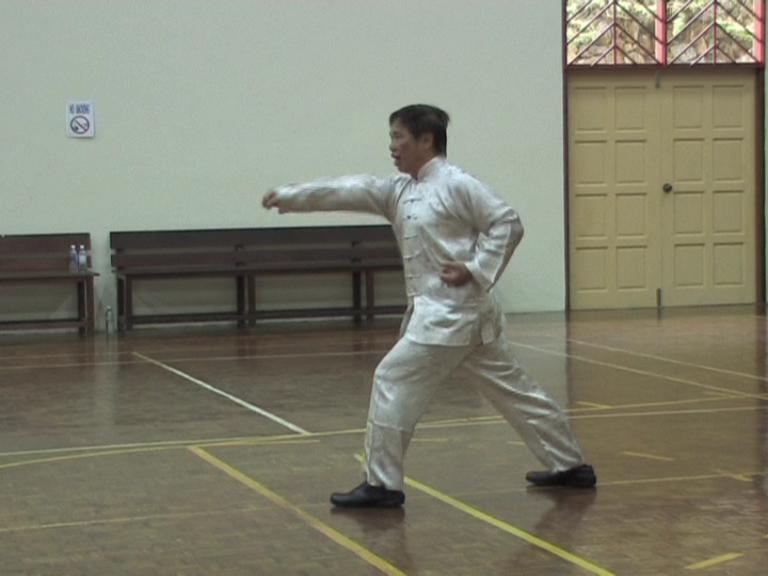 Internal force spirals out from the dan tian

I have been reviewing the video of the fundamental training program, especially the first few sections on footwork, hand techniques and the section on “Lohan Asks The Way”, in an effort to refine the quality of my movement and improve my flow.

Many people mention that the basics are important, which is very true, but they do not really know what the basics are. There are many stages of basics, depending on one’s developmental level.

For beginners, the basics are the stances and footwork, and fundamental hand techniques, i.e. the four hand strikes to the top, middle, bottom and sides, and their defence.

These basic hand patterns are linked together into a fundamental set, “Lohan Asks the Way”. This leads to the next stage of basics, the basics of set practice.

There are three levels in the basics of set practice, namely form, force and speed.

First we aim at picture-perfect form. Then we perform each form with appropriate force. This leads to fa-jing, or exploding force. In Shaolin training, “Black Tiger Steals Heart” is a good technique to develop the skill of fa-jing.

When we have sufficient skill in fa-jing using “Black Tiger Steals Heart”, we can progress to using fa-jing with the other three fundamental patterns, namely “Poisonous Snake Shoots Venom”, “Precious Duck Swims through Lotus” and “Hand a Golden Star”.

Then we go to fa-jing with the defence patterns, “Single Tiger Emerges from Cave”, “Golden Dragon Plays with Water”, “False Leg Hand Sweep”, and “Immortal Emerges from Cave”. The difference between hard force and soft force, flowing force and consolidated force is introduced. “Golden Dragon”, for example, is soft and flowing, whereas “Immortal” is hard and consolidated.

At the next level we learn various breathing methods for breath control. We link various patterns together and perform them in one breath, as if they were one long, continuous pattern. In this way we attain speed without sacrificing force and form. We systematically speed up the performance of “Lohan Asks the Way” from 36 seconds to just 4 seconds.

When we are skillful in the first 4 combat sequences and understand their underlying philosophy, we can handle any hand attacks! This is very cost-effective. Instead of learning each defence against countless hand attacks one at a time, we just learn the four basic attacks and defences, and by extension we can counter any hand attacks.

The next four combat sequences provide the philosophical framework to expand our basic hand attacks in countless ways. Various tactics, like defence-cum-attack, and no-defence-direct-counter, are also introduced.

Hand strikes are the basic of the four categories of attacks, namely striking, kicking, felling and chin-na. When we are skillful in hand strikes we just add the other modes of attack. We also use the instructional framework when learning the other attack modes.

I rediscovered some really important things such as the importance of “spiraling'’ rather than just rotating from the waist. It totally changes the quality of the movement, seems to allow the body to naturally move or transition through the different stances when moving around and it seems to allow the hands to change positions in way that does not leave an opening to the opponent’s attack.

I am glad you not only grasp the essence of spiraling, in contrast to just rotating, but also experience its benefit.

Many people, including masters, talk about spiral force, known as “chan si jing” in Taijiquan and is badly translated as “cocoon force”, but from the ways they describe it, it is obvious they don’t know what it is. Even the more basic rotation of the waist is not understood, despite it being very important. Even Taiji masters shift their body forward instead of rotating their waist. 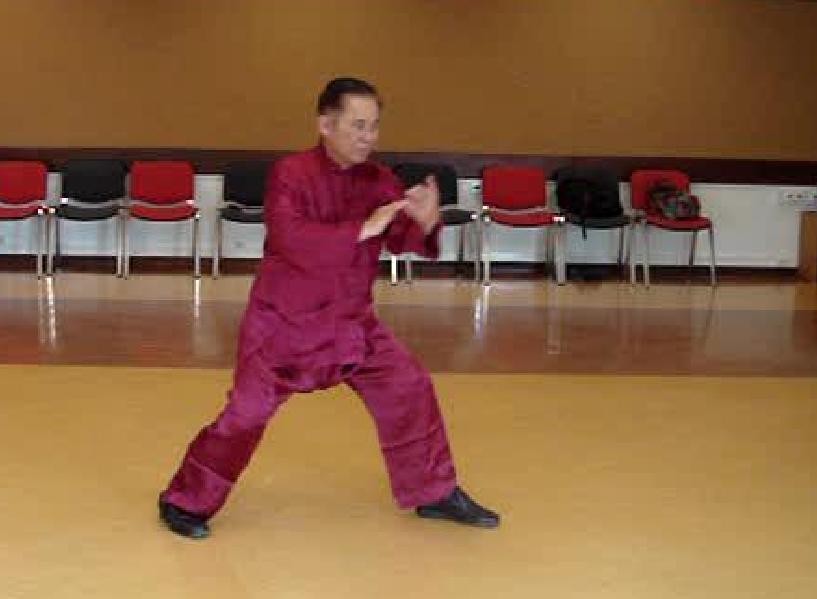 Rotating the waist is very important in Taijiquan

Even though at first glance it may appear to a non-Shaolin practitioner we are leaving them an offering. I am also starting to see where there may be some trapping and chin na hidden in the movements of even the simple hand techniques.

However, right now I am focusing my efforts on refining the quality of my movement so that I can better understand my kung fu in general and to be able to teach it correctly.

Shaolin Kungfu has been so debased that not only non-Shaolin practitioners but even Shaolin practitioners at masters’ level miss its basic meaning, least of all its depth, and therefore not enjoy its wonderful benefits not just for combat but more significantly today for daily living.

It has become a norm that Shaolin practitioners today, including those at masters’ level, tense their muscles, grimace their face and use kick-boxing for sparring, and in daily life are angry and stressful instead of being peaceful and happy as genuine Shaolin training should bring.

Other people reading this may think us arrogant, but we are not afraid to state facts, not to belittle others or glamorize ourselves but as an attempt to restore the greatness of Shaolin Kungfu. Your training and understanding, and spreading the benefits to deserving students is a step in the right direction.

I don't understand why our three golden rules don't apply to those who have a low income. Can you please explain?

Our three golden rules of practice apply to us, but may not apply to other chi kung practitioners in other schools. For our students the rules apply irrespective of their income level.

I use income as an analogy to illustrate the first golden rule of not worrying. I don’t mean the rule does not apply to our students who have low incomes.

It is different for someone who earns $10,000. If he pays $1500 for housing instead of $1000, and $1000 for food instead of $600 due to some mistakes, he can afford not to worry because his high income can more than enough cover for the extra cost due to his mistakes.

It is the same with chi flow. If a person has only 2000 units of chi flow, he can't afford not to worry if he makes mistakes because his chi flow is not enough to cover for his mistakes.

It is different for another person who has 10,000 units of chi flow. He can afford not to worry even when he makes some mistakes because his powerful chi flow can more than enough cover the adverse effects resulting from his mistakes. 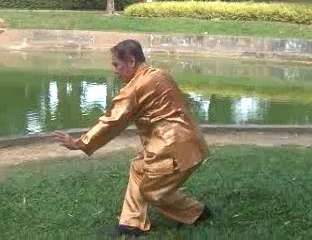 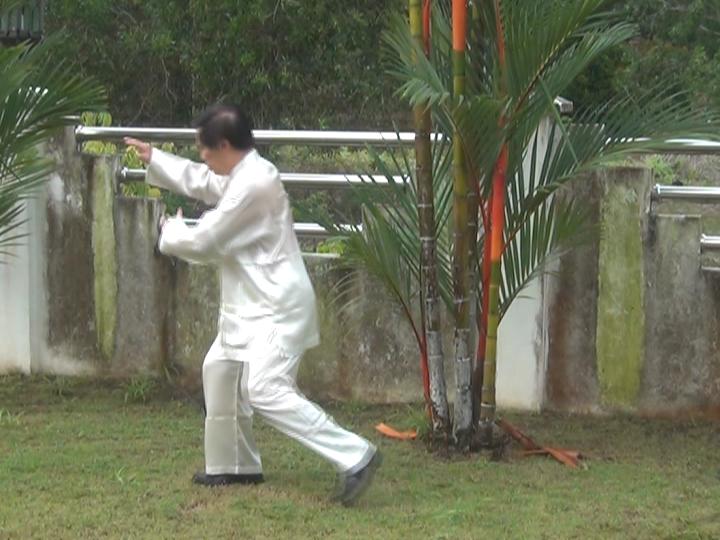 There are certain videos of yours which I doubt so much. You perform cat stance and keep your hands wide open. The ribs are wide open and it will be easy for a Muay Thai fighter to kick there with force. How do you think that such a fighting stance can help me counter Muay Thai? I mean it does but I feel it doesn’t help every time, and if you can, then please help me more in this aspect.

I don't know which videos you referred to. But you can be sure of the following three facts:

There are countless counters I can use if a Muay Thai fighter kicks my ribs with force. I may, for example, use the two examples mentioned above, namely "Heavenly Dragon Descends on Earth" or "Cloud Hands".

It would be interesting to ask how would a fragile-looking lady counter a ferocious Muay Thai fighter. You can get a lot of answers from my webpage Shaolin Counters against Muay Thai Attacks.

Is that technique focusing more on distance maintenance? Or is there any other stance based on traditional Shaolin which you can show where I can cover my ribs and make my legs strong enough to handle Muay Thai low kicks as well as techniques to counter their continuous boxing and punch them back or kick them back?

As I do not know which technique you referred to, I cannot give you a specific answer. But a general answer is that it does not matter what technique a Shaolin practitioner adopts, he can use it for distance maintenance or close combat. Kungfu is alive.

This applies to all styles of kungfu, not just Shaolin. Of course, the practitioner must be practicing genuine kungfu. Unfortunately today most practitioners only practice external kungfu forms, and bounce about when they have to spar.

Making your legs strong enough to handle Muay Thai low kicks or any attacks is third-class kungfu. In first-class kungfu you don't have to meet your opponent's strong legs.

You can see some first-class kungfu used by a fragile-looking lady against a ferocious Muay Thai fighter in the webpage mentioned above.


Editorial Note : Kshitij 's questions will be continued at March 2014 Part 2 issue of the Question-Answer Series.