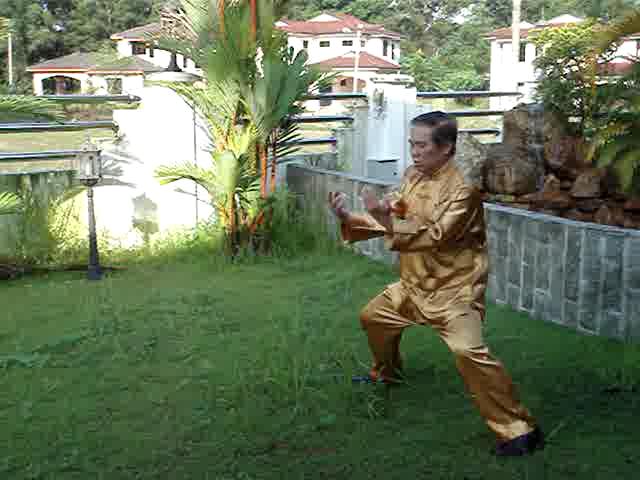 You took a few years, or at least many months, to develop internal force. You told us that when you learned Triple Stretch, it was only at a physical level. Now we can develop so much force in just a few days. How is this possible?

This is indeed unbelievable but true.

It was more than 15 years since I started learning kungfu before I had internal force. Even if I count the day I started to learn internal force, it was after 3 years of training before I could develop internal force. Before that I only practice kungfu at a physical level, like what most people do.

There are a few reasons why you and all the course participants in this Triple Stretch Course can develop so much internal force in just a few days:

Most masters teach their students the same way they learned from their own teachers. Over the years I have tremendously improved my teaching methodology which I employ to benefit our students.

Unlike us, most other people do not differentiate between techniques and skills. They erroneously think that if they know the techniques of the Triple Stretch, and practice diligently they can develop internal force. They do not realize that appropriate skills are required.

Out of a hundred practitioners, a few may develop the skills without their knowing it after many months of practice. Because they are unaware of the skills, they do not apply these skills consciously. These skills may arise unconsciously, and it is then that they develop some internal force. On most of other days, they only practice the techniques at a physical level.

In our case, because we know the appropriate skills and apply them, our students can develop internal force on the very first day. Because of other favourable factors, our force developed is more than the force developed by other people. Suppose our students' force is twice as much, which is actually a conservative estimate. So they can develop 20 units of force a day.

This description applies to our beginning students. But you already have internal force from other methods of force training, like One-Finger Shooting Zen and Golden Bridge, before you started Triple Stretch.

Suppose you already have 1800 units of force, which is the equivalent of about two years of training in our school, where every movement is a training of energy and mind. When you started Triple Stretch on the first day, because of your chi flow, you can make use of this 1800 units of force as your base.

So your development of internal force from Triple Stretch is not 30 units a day. Suppose because of your strong base, your development of force is double that of a beginner, which is a reasonable estimate. So your force development per day from Triple Stretch is 60. After three days your force developed is 180 units. Added to the 1800 units you already have, your total force is 1980 units. In my early days of practicing Triple Stretch, I could have only 675 units in three years. To have a similar amount of force you have developed in three days, I would need about ten years!

Yet, that was not too bad for me. At least I had some internal force then, though it was nothing compared to what our students now have. More than 90% of other people only practice Triple Stretch at a physical level. Thus, irrespective of how long they may have practiced, they will not have any internal force.

The estimated figures above may not be exact, but they give a good picture why you and all course participants can develop so much internal force in a few days when I myself took years

Even in just a few days, Leo provides a shining example. At the start his force is like most of you. But by the end of the course, the increase of his internal force is the most outstanding. He is the only one here who takes both the Triple Stretch Course and the Flowing Water Floating Clouds Course.

Understandably, other people may be angry at my estimate. That is their problem. I try to give as accurate an estimate as I can. Do you know why our result is more than three times that of other people? You will probably have guessed it correctly. The main reasons are that the other people do not differentiate between skills and techniques, and do not have chi flow. Their force development is incidental, whereas ours is purposeful.

Why, for other people, those who practice both arts have the least result, whereas for us we have the most result? It is because they negate their result, whereas we maximize ours. Why, for other people, those who practice Triple Stretch have more force than those who practice Flowing Water Floating Clouds, whereas for us the situation is reverse at an advanced level? This is because other people do not have chi flow, and the nature of consolidating force in Triple Stretch produces more force than the nature of flowing force in Flowing Water Floating Clouds. For us at an advanced level the situation is reverse as we can convert flowing force into consolidated force.

The above description of the non-Shaolin Wahnam group refers to those who practice the two arts correctly for internal force training. But this is not common. Most people today do not know how to develop internal force with Triple Stretch and Flowing Water Floating Clouds. They only practice them as physical exercise.

The harm done is also in the same ration. Those who attempt to develop internal force wrongly, like using isometric exercise, will be the most harmed if they use Triple Stretch, the more harmed if they practice both arts, and the least harmed if they practice Flowing Water Floating Clouds. The reason, for us, is obvious. Tensing muscles produces muscular strength, but also causes energy blockage leading to bad health, emotional stress and internal organs being deprived of nourishment. 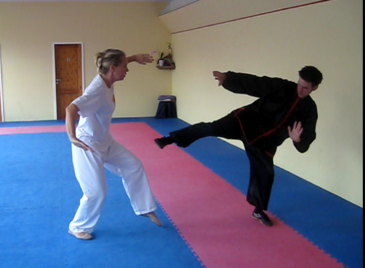 I'm a bit confused when it comes to weight loss and qigong. Marcus Santer (your student), states in his blog that qigong is not enough and should be combined with Western calisthenics.

What's your opinion on this? I practice qigong 30 minutes a day, should I complement this with a program developed by prisoners in jail? It doesn't make sense, prisoners have not the advanced skills of Shaolin masters nor the moral backbone.

Marcus was my student, but he resigned on his own from our school, Shaolin Wahnam, to start his own qigong business on the internet which we do not agree. Nevertheless, we wish him well.

Hence, Marcus' views on weight loss and qigong may not be the same as ours. And you are right to say it doesn't make sense to believe that prisoners have more skills and moral backbone than Shaolin masters.

We believe that qigong alone is sufficient for attaining loss of unneeded weight. On the other hand, if a person lacks sufficient weight, the same qigong exercise can increase his weight.

This may seem odd to many people. But from the qigong paradigm this is perfectly logical.

It is important to note that it is not the exercise itself that reduces or increases weight, it is the energy flow as a result of the exercise. In other words, even if one performs a qigong exercise correctly according to its technique but if he has no energy flow, he will not derive qigong benefits like health, vitality and longevity. This, in fact, is the main reason why many people practicing qigong for years yet do not have its benefits. This is also a reason why we believe that qigong should be learnt from competent instructors, and not just from the internet.

Saying that energy flow restores yin-yang harmony is employing a very concise qigong jargon. In the context of an over-weight person, there are insufficient enzymes to digest food, whereas in the under-weight person, there is overproduction of enzymes. In both cases, the fault is described as energy blockage -- energy in the form of mental impulses is blocked from reaching the relevant glands to produce the right amount of enzymes. Practicing qigong will produce energy flow to clear the blockage to restore the right weight for good health.

This concept of energy flow to restore yin-yang harmony applies to all diseases. Hence, regardless of whether students have high blood pressure or low blood pressure, being easily agitated or being too passive, suffer from purging or indigestion, or any opposite ailments, practicing the same qigong exercise can overcome these diseases!

Drawing the Moon is an excellent exercise to generate energy flow to reduce weight and gain good health. Many people have benefited from this exercise.

In his blog which you have provided, Marcus said that he developed too much back pain performing Carrying the Moon. This was an indication he was not performing the exercise correctly. As far as I can remember, he never learned the exercise from me. He was slender all the time I saw him, so there was no need for me to teach him Drawing the Moon.

I have read two of your books in Spanish, "Shaolin Kungfu" and "The Art of Chi Kung". They are excellent. I have started to practice Wushu in my city.

Please note that modern wushu is different from traditional kungfu. But if you can learn internal force and combat application from a competent teacher, your wushu patterns will become very good kungfu patterns. 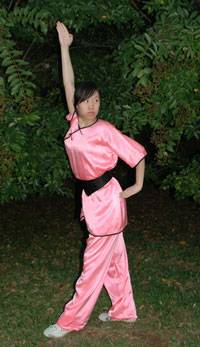 Also I practice two exercises that you mention in your book "Lifting the Sky" and "Carrying the Moon".

"Lifting the Sky" and "Carrying the Moon" are excellent exercises. Follow my instructions in my chi kung book as best as you comfortably can. Relax and don't think of anything during your practice.

I am interested in martial art, but I started recently. I do first for health, because I have phobias and Obsessive Compulsive Disorders. I am trying to calm my mind. I wish to feel the power of Chi.

One of the best pieces of advice I have learnt from my sifu, Sifu Ho Fatt Nam, was first be healthy, only then talk about combat. Unfortunately, it has become a norm that many martial artists today become more and more unhealthy the more they train their martial arts. Something is basically wrong.

But if you practice genuine high-level kungfu, you will be healthy, calm your mind and experience chi. 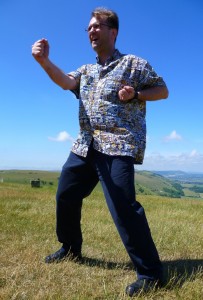 Secondly I practice because I like the personal defence. I like to protect myself and other weak and loved persons. Thirdly, to expand my mind, to reach Zen/Chan or the "Truth", like what you speak in your books.

Further, they do not use the martial arts they practice; they mainly use Kick-Boxing.

Great kungfu like Shaolin and Taijiquan expands the mind and spirit. At a low level, it makes practitioners peaceful and cheerful. At a very high level, it enables them to expand into the Cosmos.

I would like to visit Malaysia and talk with you. I saw in your website a list of countries you have visited this year, but unfortunately Argentina is not included.

I hope to visit and teach in Argentina in the future.

You can attend my Intensive Shaolin Kungfu Course, but you need to have some kungfu experience. Please log into my website ; there is a lot of information.