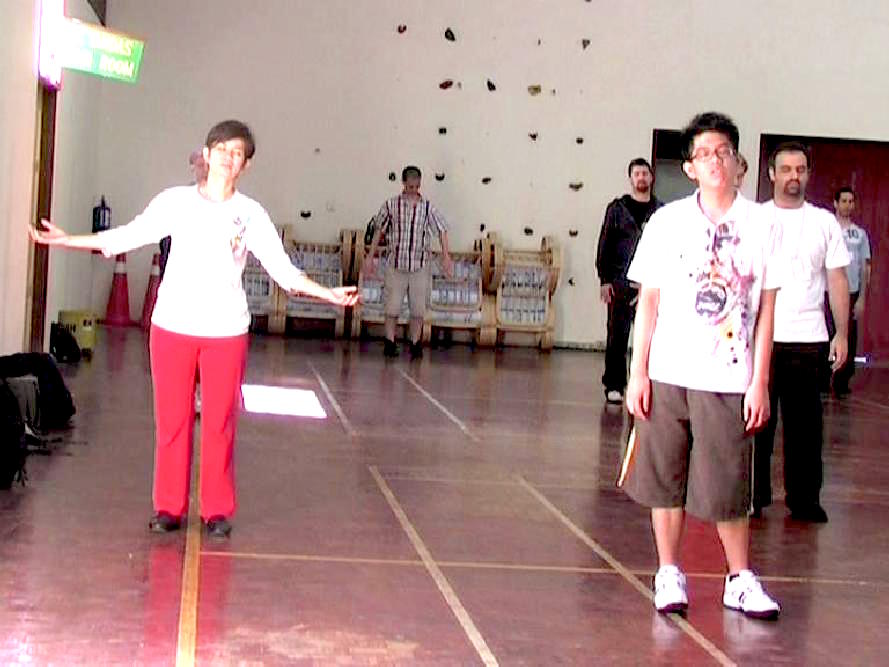 I have just bought Sifu Wong Kiew Kit's wonderful book, "Chi Kung for Health and Vitality", which is absolutely brilliant, and I am going to do home-study,

Thank you for your kind words for my book. While you can get good benefits by practicing from my book, the benefits you get will be immensely more if you learn personally from one of our Certified Instructors. If you attend my Intensive Chi Kung Course, it will even be better.

It is hard to imagine the difference. You may think that by learning personally from our instructors or from me, it will be two or even three times better. It is hard for you and many people to believe that by attending my Intensive Chi Kung Course, for example, the benefits can be more than a hundred times better. A main reason why many people cannot appreciate the difference is because they mistakenly think that if they know the techniques they will derive the benefits.

But I just had one very important question. Is it true that visualization is no longer necessary in chi kung practice as it does not add benefit to the practice? A gentleman who is an instructor of Shaolin Chi Kung here in the UK has given me his opinion that visualization is no longer necessary, and I am sure he is right, but I just wanted to seek your opinion.

Actually this is not an important question. But I shall give you an in-depth answer.

An example is Cosmic Shower, which is one of many advanced exercises taught in my Intensive Chi Kung Course. It is by performing appropriate visualization that students tap energy from the Cosmos to have a cosmic shower, which clears away their energy and mental blockages, and strengthen them physically, emotionally, mentally and spiritually. If they just perform the exercise without visualization, they may just have an energy flow.

Whether visualization is necessary depends on various factors. In your case where you learn from books, for example, it is best to leave out visualization. It is because not only you will not derive benefits from the visualization, but more significantly you may harm yourself seriously.

Let us take an example from Cosmic Shower. One important instruction is as follows. Open your bai-hui (which is a vital point at the crown of your head), and let good cosmic energy flow into you. Even when you understand this instruction very well, you will be unable to carry out this skill. You have to learn it personally from a master.

An analogy may make this clearer. Suppose you wish to learn to play football by reading a good football manual. An instruction to help you score goals is as follows. Dribble the ball past the defenders and shoot it to the left bottom corner of the goal-mouth. Even when you understand the instruction clearly, you will be unable to carry out this skill.

Isn't it unfair that you have to be contented with low-level results practicing from a book, while those who attend my Intensive Chi Kung Course have high-level results, you may ask. You have to be reasonable. They pay 1000 euros to attend my course to learn high-level skills, whereas you pay much less for purchase of the book. 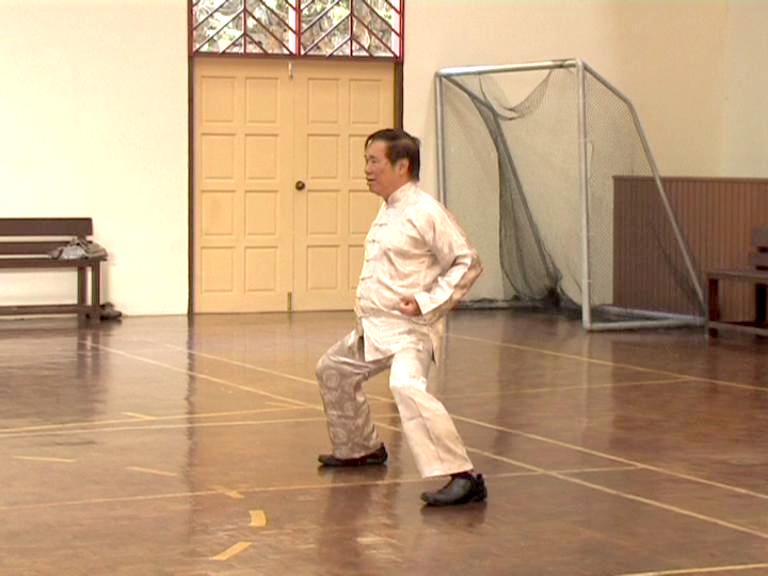 I searched for the best way to cultivate chi by reading some books and resources, and found Zhan Zhuang to be particularly interesting as it helps to cultivate chi, nourish internal organs and improve health without the requirement to do any movement or pattern.

Many people find zhan zhuang, or stance training, not only boring but very demanding because they have to endure remaining at one position for some time. However, we in Shaolin Wahnam find zhan zhuang both enjoyable and beneficial.

Why is there such opposing difference? Some people may not like what we say, but it is true. Many people practice zhan zhuang as an endurance test and derive no benefits, but we practice is as a relaxation exercise and derive a lot of benefits.

However, I read your article on the horse stance and learned that this stance training should be done with care to derive the benefits or else there would be severe harm. So I need to know how to practice the horse stance correctly.

The answer to your question as to how to practice the horse stance correctly is very simple, though it may not be easy. There are actually two answers, an academic answer and a practical answer.

The academic answer consists of two steps. One, get the form correct. Two, follow the three golden rules of stance training, i.e. relax, relax and relax.

The practical answer is straight-forward. Learn it personally from a master who knows how to practice the horse stance correctly and who is willing to teach you. 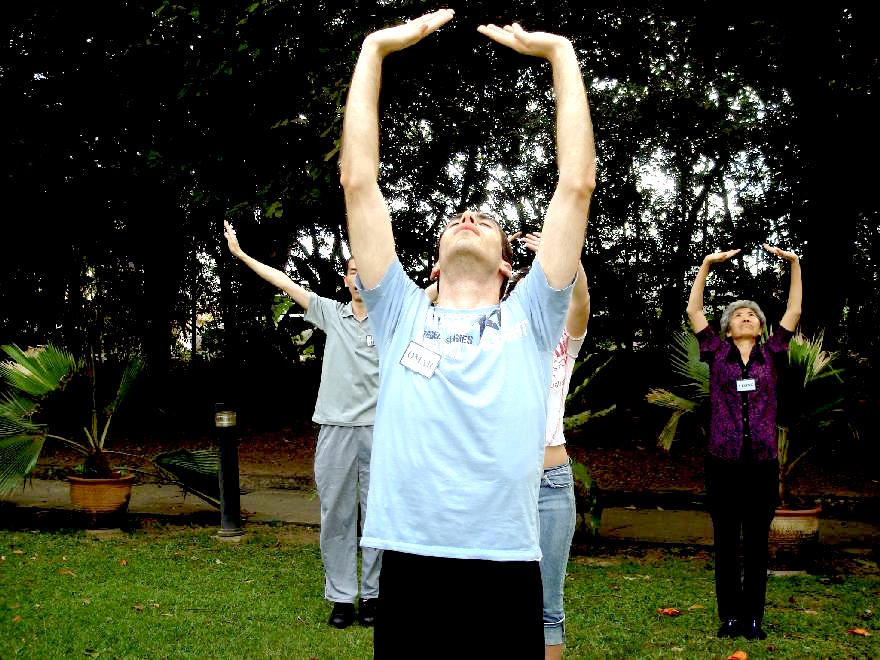 Can you provide me the complete details? I don't mind if it is troublesome. I just want to do the training as correctly as possible and leave no chance to error

What are "Lifting the Sky" and "Carrying the Moon" in qigong training? How to practice them with zhan zhuang? Can you provide me with the details?

"Lifting the Sky" and "Carrying the Moon" are two excellent chi kung exercises taught in our school. They have brought many wonderful benefits, like good health, vitality and longevity, to our students.

You can practice one or both of them before or after practicing zhan zhuang, or separately from zhan zhuang. You can read up the details of how to practice them from my chi kung books. 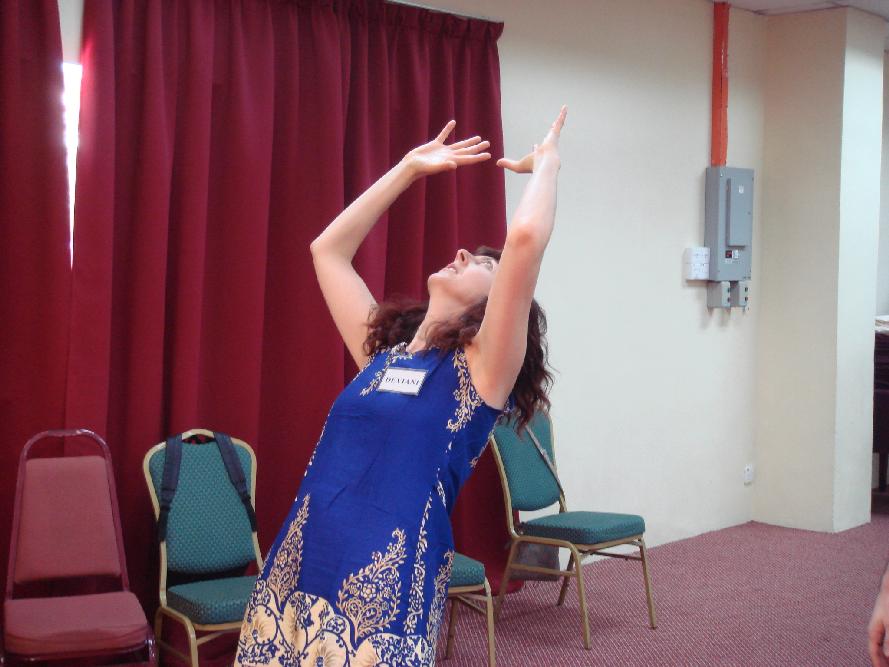 Can I cross my arms while doing zhan zhuang?

You can but you may not.

This means if you want to cross your arms while practicing zhan zhuang, you can do so. No one is going to stop you except yourself even if you have a strict teacher who may hit you with a cane.

But it is not advisable for you to do so. You would get the best benefit by following the instructions required for that particular stance training. If you perform the Horse-Riding Stance, for example, you should place your two fists at your sides at waist level.

If you perform the Three-Circle Stance, you should hold your arms like holding a circle in front of your chest. If you cross your arms, you may not have adverse effect, but you will not get the best benefit.

Your concept is mistaken. Both Taoist and Buddhist breathing may have the abdomen expand or compress when practitioners inhale or exhale.

But it is important to note that it is energy and not air that flows into the abdomen. This means that expansion and compression of the abdoment may not be clearly noticable. In fact if the expansion and compression of the abdoment are drastic, as is often the case with those who learn from books or incompetent instructors, it is an indication that they are practicing incorrectly. They perform mechanical breathing exercise rather than chi kung.

I recommend that you don't worry about your breathing when practicing zhan zhuang. This means you let your breathing to be spontaneous. Even in Taijiquan, Baguazhang and Xingyiquan, which are often questionably regarded as Taoist arts, there is usually no specific instruction on the expansion and compression of the abdomen during breathing while performing zhan zhuang.