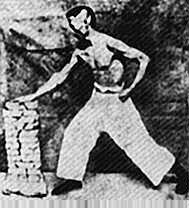 I have a question about Sifu Ku Ru Zhang, the great Northern Shaolin master who supposedly killed a horse with a slap of his hand. Is this not a violation of the ethics of Shaolin; killing an innocent animal to impress low level barbarians?

Sifu Gu Ru Zhang did not supposedly kill a horse; he actually did it with a seemingly gentle slap of his Iron Palm.

No, it was not a violation of Shaolin ethics. If a Shaolin master had to kill for a good cause, he would do so. To be compassionate does not mean that one cannot kill if it is absolutely necessary to do so. If he does he would do so with causing as little suffering as possible. That was what Sifu Gu Ru Zhang did. The horse died instantly without much suffering.

Sifu Gu Ru Shang did not kill an innocent animal to impress low level barbarians. The horse was well trained. It was brought into China by a Russian master to insult the Chinese people, saying that their marial art was so useless that they could not even fight against a horse, and it had injured or killed many Chinese martial artists.

Neither the Russian master nor the Chinese witnessing the event were low-level barbarians. The Russian master must have high level of skills in training a horse to be victorious even against Chinese martial artists. Although China was at a low point in its history then, by no stretch of standard could one call the Chinese people low-level barbarians. They enjoyed some of the highest levels of civilizations the world had experienced.

Notwithstanding this, Sifu Gu Ru Zhang never meant to impress the Russian master or the Chinese people. He just wanted to prevent further killing of people by the well-trained horse.

And how about the karmic effects of this sort of action? 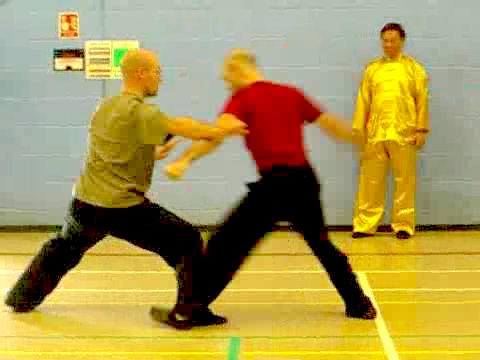 And finally, why do you portray Sifu Gu Ru Zhang as a hero when you mention him, considering your noble statement: "A Shaolin disciple, for example, is trained to be courteous and considerate, brave and righteous, assess problems and situations with calmness and clarity, and attend to duties with zest and loyalty. While the philosophy of many martial arts mainly focuses on how to be stoic and hurt the opponent, Shaolin philosophy teaches gentleness and a love for life. The twin pillars of Shaolin philosophy are compassion and wisdom."

I did not try to portray Sifu Gu Ru Zhang as a hero. He already was; I merely reported his heroic deed.

Sifu Gu Ru Zhang fitted perfectly with my noble statement. He was courteous and considerate. He did not pick a quarrel with the Russian master. He let him leave graciously without hurting or even scolding him.

Sifu Gu Ru Zhang was brave and righteous. Even when he knew the horse had killed many martial artists and he would risk his life to face it, he gallantly took the challenge. He did the right thing. Even when he did not like to kill, he had to kill to prevent further killings. He did so with the minimum suffering to the horse. Hopefully the horse could be reborn at a better station in its next life.

Sifu Gu Ru Zhang also demonstrated gentleness and love for life. He was gentle with the horse though he had to kill it to prevent it from killing more people. He could have killed the Russian master too, but he let him leave, showing his respect for life. Sifu Gu Ru Zhang exemplified the Shaolin philosophy of compassion and wisdom.

In my entire life I have been fascinated with Shaolin Kungfu, but being from such a small town where the art is not practiced, I turn to Sifu Wong Kiew Kit's books and I've found myself falling more in love with this bequtiful art and I find myself wanting to learn more but I have no guidance to help direct me to learn in great depth in order to better myself mentally and physically. So I'm writing this as a man in despair and asking for help in order to study Shaolin Kung. Please what can I do?

Techniques are what you do to overcome problems. If an opponent throws a kick at you, for example, you lean your body back to avoid the kick. This is a technique.

In an intensive course, students refine their skills to higher levels. They also learn many new techniques. They learn a lot of material in an intensive way. They learn in five days what an average student may take a year to learn in a regular class. Therefore, the students may have learnt many new techniques at an intensive course, but they still lack the skills to perform them efficiently. So they return home and practice in a regular class where their teachers will help them to consolidate their skills. 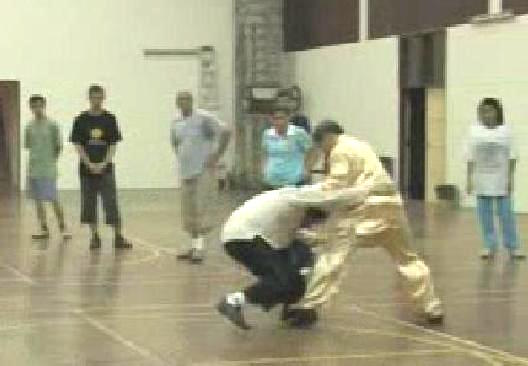 When was Chow Kok Chee born? Was he a better fighter than the world champions of today?

Sifu Chow Kok Chee is a kungfu lover and terrific fighter. He learned from some of the greatest kungfu masters of the time around Kuala Lumpur, including the Ngok Ka patriarch, Sifu Loong Poh, the Choy-Li-Fatt patriarch, Sifu Chen Choy, and a direct disciple of Sifu Wong Fei Hoong, Sifu Soong Siew Por.

Sifu Chow Kok Chee himself personally told me that he had been involved in over 200 gang fights, many of which were of life-death consequences, and some of which were ambushes of ten or more attackers with deadly weapons like hand axes, choppers, spikes as well as concentrated acid and powered glass. He survived them all, albeit with a few scars.

With due respect to world champions, my personal opinion is that in real fights where no rules hold, modern world champions are no match at all against Sifu Chow Kok Chee. As kungfu has been debased so badly, it is difficult for today's martial artists to appreciate the fighting abilities of genuine kungfu masters.

But the following comparison may make the picture clearer. A gang fight where you are ambushed by armed attackers is very different from a modern martial art competition where safety rules apply. One is a matter of life and death, the other is a sport. In a gang fight, it is fight and flight, where your main concern is to get out of it alive. In a modern martial art competition, it is fight and fight, and your main concern is to win, despite sustaining serious injuries.

A gang fight lasts only a few seconds, seldom more that two or three minutes. A modern competition lasts much longer. In those few seconds, a few axes and spikes are raining on you, and if you are less lucky concentrated acid and powdered glass will be thrown at you. It is barbaric - just unthinkable in modern Western societies. Happily, such barbaric gang fights do not happen any more in Malaysia, but they were not uncommon in Malaysia in the 1960s and in China in the past.

A modern fighting competition, though brutal, is a sport -- meant for the entertainment of spectators, though participants themselves may not find it much fun. In a gang fight, you need great fighting skills to come out alive. In those few seconds when you are attacked, if you are just a bit slow or unskillful, you will be seriously injured, if not dead. In a world class fighting competition, you don't have to worry about axes and spikes, concentrated acid and powered glass, and you are protected by safety rules from being hit at vital spots, though you need much endurance to withstand punishing strikes.

A disciple recently told me that a famous many-time heavy weight world Boxing champion was involved in a real fight in a pub. He punched his opponent on the head, but without the protection of Boxing gloves he broke his own knuckles as his punch landed on the opponent's skull. If he met Sifu Chow Kok Chee in a real life and death fight, this world heavy-weight Boxing champion would not even have a chance to break his knuckles. As soon as he raised his hand to strike, Sifu Chow Kok Chee would have felled him with a Big-Boss strike (one of Sifu Chow Kok Chee's favorite techniques) at the solar plexus.

I suffer from chronic blepharitis (eyelid inflammation), and I was turning to Chinese medicine books for a cure.

You should see a doctor, a Chinese physician or any qualified healer instead of attempting self-cure by reading a book. 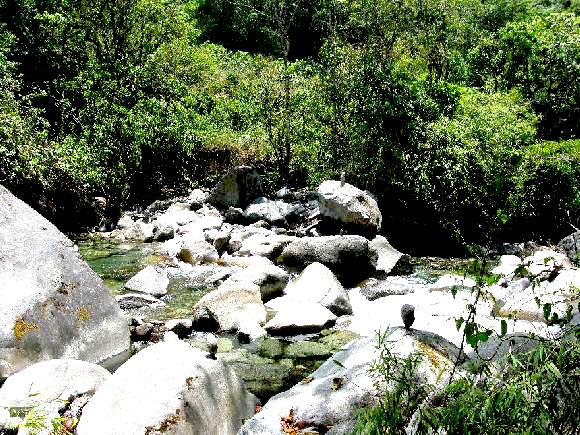 Counting leaves is an excellent way to improve eyesight

However, a work-mate of mine said that chi could never penetrate the eyes, and that was why Chinese warriors protected their eyes!

Your work-mate is mistaken. Chi can certainly penetrate the eyes. I have channel chi to their eyes to help many people overcome their eye problems.

My Western doctor has prescribed cortisone. Has Chinese medicine any remedy?

Yes, there are many remedies in Chinese medicine against eye problems. But you should see a qualified Chinese physician for the remedies instead of getting them from books, e-mails or the internet.