SELECTION OF QUESTIONS AND ANSWERS
MAY 2010 PART 3 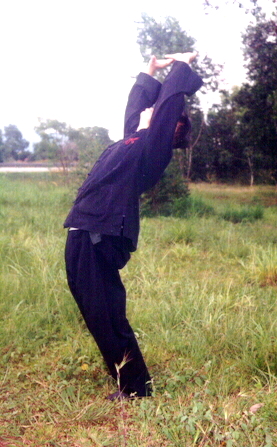 "Carrying the Moon" is one of the exercises in Ba Duan Jin, or a set of chi kung called Eight Pieces of Brocade

I was searching on Zhan Zhuang on the internet and found your site where Mr Wong Kiew Kit answered some questions about these qigong exercises.

He says, "But if you train on your own, you must pay attention to the following points. Practice Ba Duan Jin, or the Eight Pieces of Brocade, daily for at least six months before you attempt Zhan Zhuang, or Stance Standing. You have to make sure you do not have any major energy blockage before starting Zhan Zhang, and Ba Duan Jin can look after that, provided, of course, you practice correctly."

My advice was given to someone practicing on his own who knew both Ba Duan Jin and Zhan Zhuang.

It is easy for those practicing Zhan Zhuang on their own to make mistakes which can cause adverse effects that the practitioners are often unaware of. Ba Duan Jin is an excellent set of chi kung exercises that can overcome the adverse effects.

Further, if a practitioner practices Ba Duan Jin first, he may have some experience of energy flow, which not only can overcome blockages caused by adverse effects but also speed up the progress of Zhan Zhuang training.

I am confused. I have a book from Lam Kam Chuen called "The Way Of Energy" which I think is for beginners without any experience of qi or qigong practice. And if you go by the book, you start with Zhan Zhuang practice (just first two positions for 6 months) at the beginning. You start practicing Ba Duan Jin after 6 months - when you add additional Zhan Zhuang positions.

I would really like to start practicing Zhan Zhuang. I almost started, but I'm confused. I was pretty sure that this book from Chuen is safe for beginners too -- at least many people are saying that, and now I'm confronted with two different extremes -- from Lam Kam Chuen and from Mr.Wong Kiew Kit.

It is understandable that you may be confused with the two differing views. But actually the two views are not contradictary or mutually exclusive. In other words, it is not true that if Sifu Lam Kam Chuen is right, then I must be wrong, or vice versa. Both of us are right in our respective ways, and the following explanation will make this clear.

I have read Sifu Lam Kam Chuen's book and it is excellent. Then why are my views on Zhan Zhuang as given in my advice quoted above different from Sifu Lam's views. I would also like to add that when I gave the advice, it was done independently, without any reference or allusion to Sifu Lam's views.

There are two main reasons for the difference of views. One, different masters and different schools have different approaches and methods. Two, and this reason is more appropriate in this case, the same master may teach differently at different times or in different situations.

You would be pleased to know that was also the approach I went through, i.e. I practiced Zhan Zhuang strainght-away, without first practicing Ba Duan Jin for six months.

Then why did I advise the enquirer to practice Ba Duan Jin for six months before practicing Zhan Zhuang, why didn't I advise him to follow the way I did? It was because the approach I advised him to follow was much better than the approach I myself followed. Not only it would give him a chance to learn chi flow which could clear his adverse effects unknowingly caused by wrong practice, it would also speed up his progress.

Why didn't I use this better approach myself? The answer is straight-forward. I did not know of this approach at that time. I discovered it over many years of teaching students practice Zhan Zhuang. Indeed, using this better approach, a typical Shaolin Wahanm student could achieve in three months what I myself would need three years to achieve! This is a fact.

Three months? Wouldn't Shaolin Wahnam students need to practice Ba Duan Jin for six months before they start Zhan Zhuang so as to have better results?

Practicing Ba Duan Jin for six months is what I estimate a student learning on his own would need to do to develop some chi flow. But our typical Shaolin Wahnam students would be able to develop chi flow in a few days. Those who attended my intensive courses could generate a chi flow within the first half hour. It took me more than a year to learn generating chi flow. It is not without justification that we claim our students can attain in six months what many other people attain in three years. 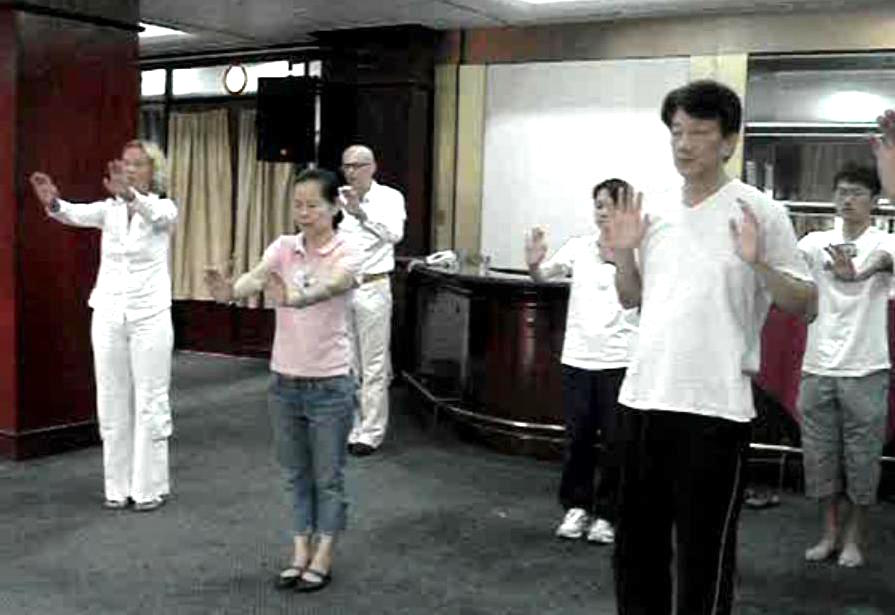 I've learned about martial arts for years and currently practicing a martial art known as the "Palm of Black Sand". I just wanted to know what the secret recipe ingredient is. I can't find it anywhere. If you know what it is please email me and give me an idea. I don't want to create something dangerous or wrong without knowing about it.

"Black Sand Palm" is a skill or type of force practiced in some styles of kungfu. You may be interested to know that in kungfu history, those who belonged to what was known as "meng moon ching pai" ("ming men zheng pai" in Mandarin), meaning "established schools and righteous styles", normally did not practice Black Sand Palm.

Why did "chai pai" practitioners prefer these skills or types of force? One important reason was that their nature of training and application was quite in line with the practitioners' character.


You should be able to purchase the ingredients from a good Chinese medical supplies shop. Obtain about 12 grammes of each ingredient and soak the mixture in about 3 pints of white rice wine for two or three months. Apply the medicated wine on the palms or any injured parts of the body after training.

I am deeply interested in qigong. Some years ago, I used to practice kung fu, and as I progressed I started to practice Iron Shirt Qi Gong. Some white curly hair began to grow on my head (and I was 17 at the time), and I also noticed some advanced practitioners were young but white haired. When I stopped practicing, my hair came back to normal.

It was wise of you to stop the practice, especially when you were not learning personally from a qualified teacher, though the appearance of white hair on your head may or may not be due to your wrong practice.

Wrong practice of internal art sometimes cause pre-matured white hair. However, if the practitioner is elderly, having white hair is normal. 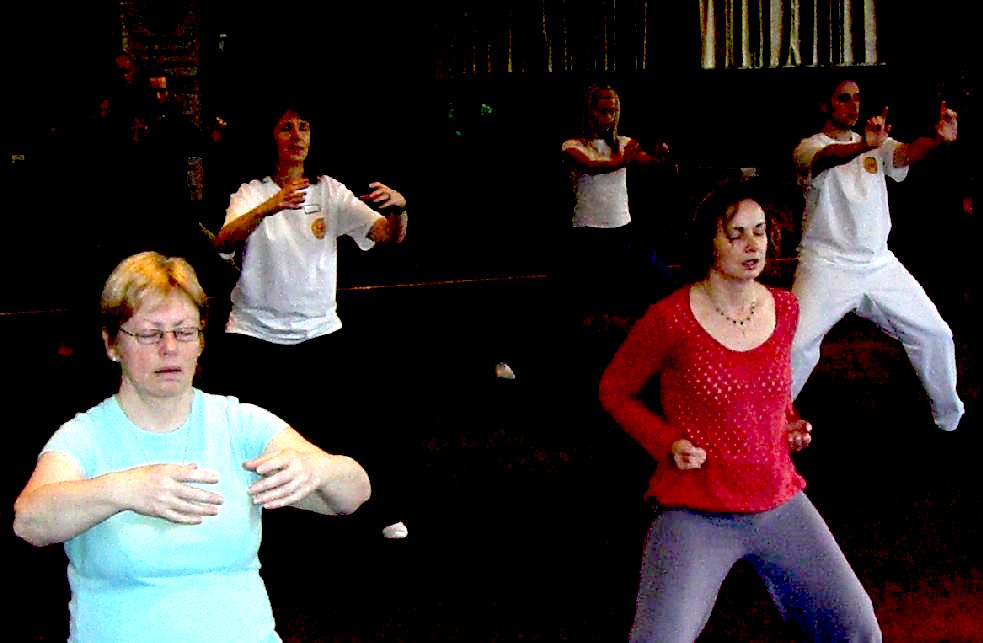 Students practicing zhan zhuang at a regional course in Ireland. Because they have prior chi flow experience, they can feel internal force from their zhan zhuang practice after only a few days -- an achievement that is unthinkable to many people.

I met a guy who said he was a qigong master, and proposed to teach me, and said that all I knew about qigong was wrong. He taught me to create roots and link with cosmic energy, However, I and other students realized that he only knew what he taught us, and some of what he had taught he had invented himself.

It is unethical to teach when one is not qualified. It is especially so in internal arts like qigong (chi kung).

A big mistake many qigong practitioners make, including those who have been teaching qigong for many years, is to treat qigong, which is an energy art, as gentle physical exercise. Hence they think, mistakenly, that if they know the external forms of qigong, they can practice or even teach it.

Much of what happens in qigong training occurs inside the body which an incompetent teacher and his students might not know. One may perform the external forms of qigong correctly, but if he misses the internal aspects, he is only practicing the qigong forms as gentle physical exercise. Worse, if he makes some mistakes, which he may not realize, his practice will result in adverse effects.

You may or may not find a real master -- that is a different issue. But if you keep on practicing gentle exercise even correctly, not matter for how long you practice, you will not feel the real essence of qigong. This, in fact, is what happens to the great majority of qigong practitioners today. They practice gentle physical exercise but think that it is qigong. They may practice for years or for their whole life-time, but they will never get the benefits of qigong.

I got into university, and stopped practicing for some time. About a month and a half ago, I resumed practicing. Then my sister gave me a book, "Chi Kung for Health and Vitality". I really appreciated the book and its writer.

I happen to be the author.

Many people have benefited much by practicing the exercises I describe in the book. Some of them later attended my Intensive Chi Kung Course and told me that there was no comparison between the benefits they obtained by practicing from the book, which they earlier thought were fantastic, and the benefits they obtained by learning from me personally.

You can start by learning some of the exercises in the book. Follow the instructions respectfully, especially those instructions on not tensing any muscles and not thinking of irrelevant thoughts. But do not attempt those exercises that I have specifically warned students not to practice without supervision from a competent teacher. 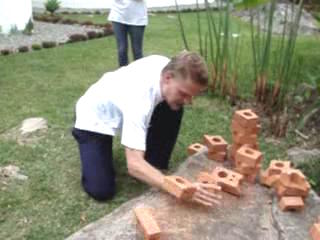 I looked up the internet. Unhappily, there are no academies or institutes that you recommend near me, as I live in the southeast region of Brazil,

We hope to expand to Brazil soon. But we have excellent teachers in South America who have produced very good results. Please refer to our List of Certified Insructors.

Our Chief Instructor for South America is Sifu Rama Roberto who founded the beautiful Shaolin Wahnam Centre in the Garden of Timelessness on the Blue Mountain in Costa Rica. I visit the Blue Mountain annually to conduct courses.

I would like to ask if there is any advice from Master Wong Kiew Kit on my spiritual journey through qigong, including the search for a master. I wish to really thank you for having written the book, which is a light in my life.

High-level genuine qigong is excellent for spiritual cultication. There are three dimensions in qigong training, namely jing, qi and shen, which are physical form, energy and spirit. These three dimensions are integrated. When one practices qigong, he cultivates in an integrated manner his physical body, his energy and his spirit.

However, low-level qigong pays attention mainly on the physical body, with little attention on energy and spirit. Worse, today many qigong practitioners have ignored the cultivation of energy and spirit, and focus only on physical forms. This type of qigong has degenerated into gentle physical exercise.

Logically, if your focus is spiritual cultication, you must search for a master who not only includes spiritual cultivation in his qigong teaching but also practices high spiritual and moral values in his daily life. Understandably such a qigong master is rare, now as well as in the past. Nowadays many qigong teachers do not have any awareness of energy or spirit.