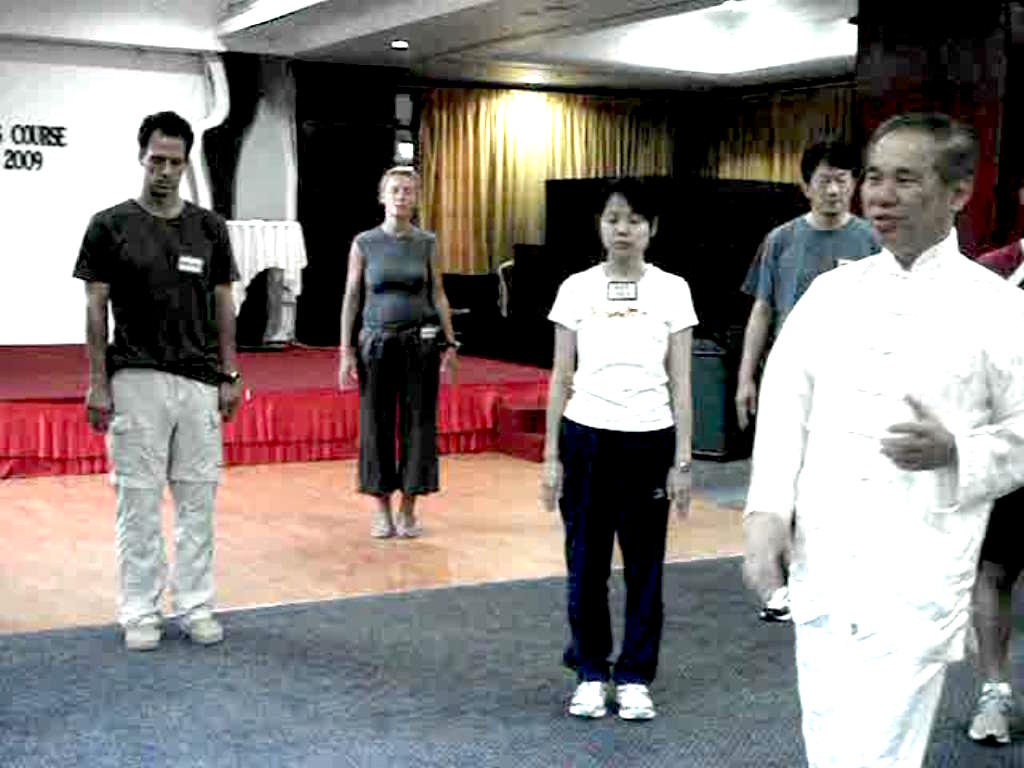 Training the mind is a very important aspect of our chi kung. Here Grandmaster Wong leads course participants in an Intensive Chi Kung Course into a heightened level of mind.

I have a seemingly intellectual question which to me is actually a practical practice question.

I have many times seen what I think happen, many times in magical ways. Since mind is the highest level, is it more important what we think than even choosing our particular practice regimen correctly?


Editorial Note: Alex's other questions are posted in the April 2010 Part 2 issue.

Depending on different variables, the answer can be yes or no, yes and no, or neither yes nor no.

At you level, where you have developed a powerful mind and you practice high-level chi kung, the answer is yes, what you think is more important than choosing the best exercise.

For many people whose mind is not yet developed and they practice low-level chi kung, the answer is no, choosing the right exercise is more important than what they think.

For masters, the answer is yes and no. Yes, because their mind is so powerful, it does not matter what exercise they choose. No, because they are so skillful when practicing a well chosen exercise, it does not matter what they think. Yes and no, because their mind is powerful and they are very skillful, whatever exercise they choose will give them good results, and they may vary their emphasis on mind or skill whenever they like.

For example if people have health problems and they practice chi kung diligently but hold strongly to the fact that they have diabetes, bad back or any particular illness, will this prevent chi from clearing out those health problems?

Again, the answer is yes or no, yes and no, or neither yes nor no, depending on different variables.

If the health problems are not serious, the chi kung they practice is powerful, and they practice correctly, their negative mind-set does not prevent chi from clearing their problems. In other words, they will recover. Of course, their result will be much faster and better if they have a positive mind-set. 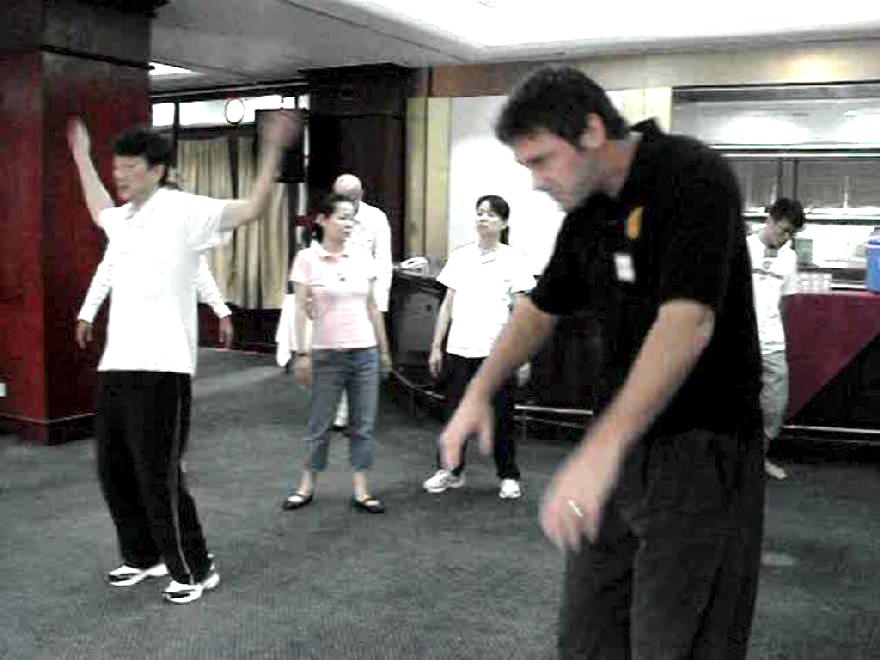 On a personal practice level is it more important to set good aims and objectives and then enjoy my practice, than to make sure I choose an optimal practice regimen?

Yes, having set good aims and objectives, enjoying your practice is certainly more important than ensuring you have chosen an optimal practice regimen. I would like to emphasize that this answer applies to our Shaolin Wahnam members. It may not be applicable to other people.

The answer fits in perfectly well with our three golden rules of practice, namely not to worry, not to intellectualize and enjoy the practice. Constantly attempting to ensure choosing an optimal practice regiment falls under worrying and intellectualizing.

Will the chi flow naturally follow the mind's direction as specified in my aims and objectives?

As in many things in our arts, the answer can be yes, no, either yes or no, neither yes nor no Using my earlier answers as guidelines, you can work out the answer for this question yourself for your intellectual pleasure. But when you are practicing, you don't worry about the question nor intellectualize on the answer. 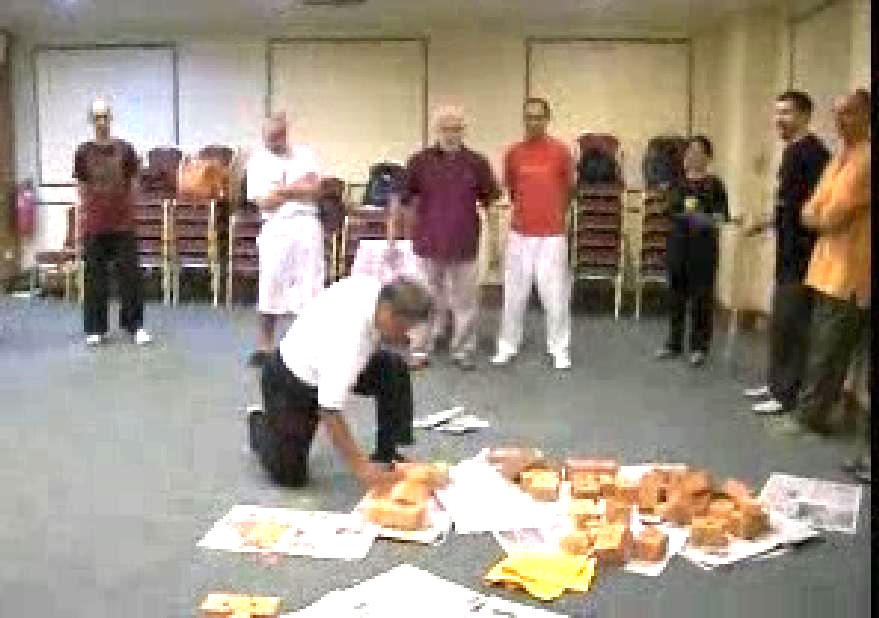 Sifu Joko Riyanto, our Taijiquan instructor from Indonesia, using his internal force to break a brick. The internal force can also be used to fell an opponent with just one strike.

My tutor who is a 2nd Dan says that each part of Tai Chi though slowed down can be a strike in a fighting style if it is performed fast.

Your tutor is right.

When a student can perform the Tai Chi Chuan movements smoothly and correct as well as is able to generate an energy flow, he progresses to performing the movements fast and powerfully yet in a relaxed and gentle manner.

This may sound odd to many people. They wonder how a person could be relaxed and gentle yet fast and powerful at the same time. Of course, this is possible. This, in fact, is the hall-mark of Tai Chi Chuan.

As Tai Chi Chuan is a martial art, many Tai Chi Chuan movements are effective strikes. Most practitioners today, however, practice Tai Chi Chuan as a slow, external exercise, without any understanding or experience of its fast, powerful martial aspects.

Where can I find a book that has this info in it, so that if I make a fist it might knock a person over like a fighting style?

You can find a lot of such information in my book, "The Complete Book of Tai Chi Chuan".

A skillful Tai Chi Chuan practitioner can knock down a person with any part of his body.besides his fist, such as his fingers, palm, forearm, elbow, shoulder, thigh, shin and foot. Indeed, because he uses internal force, his strikes with his palms or fingers are more powerful than with his fists.

But there are many more worthy results of practicing Tai Chi Chuan besides knocking down a person with just one strike. 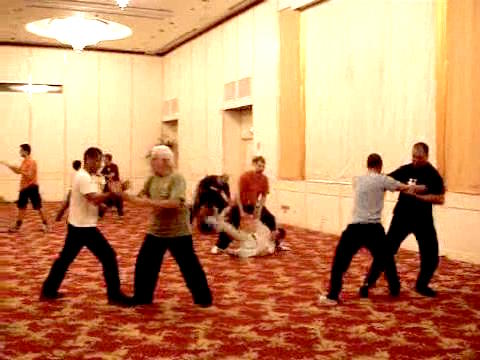 Taijiquan is a martial art. Here participants at an Intensive Taijiquan Course in Penang enjoyed their sparring

I am told that "ch'uan" is the fighting style and "tai chi" isn't. I am confused as I am also told they are the same.

However, many people who practice Tai Chi Chuan nowadays practice it as an external gentle exercise like a dance instead of a martial art. They also shortened the term "Tai Chi Chuan" to "Tai Chi".

Can you help me? As I am disabled with arthritis I constantly have to fight pain and fatigue and have no pain killers. It was by learning Tai Chi back in 1995 that I was able to walk when I was told I would never walk again.

Congratulations for being able to walk again after practicing Tai Chi Chuan. This was a great achievement.