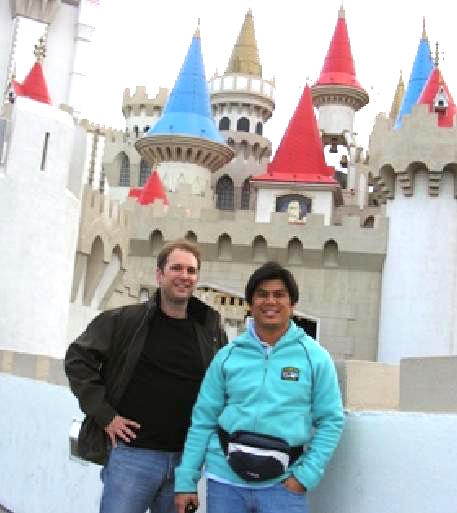 I recently acquired your book "The Art of Shaolin Kung Fu". I am 16 years old and live in Las Vegas, a city filled with immorality and the vices of humanity.

In our school, we learn that there are two ways of looking at anything. One is the negative way, and the other is the Shaolin Wahnam way.

Seeing Las Vegas as a city of immorality and vices is the negative way. I have been to Las Vegas many times to see my disciple, Anthony Spinnichhia, and to conduct courses organized by him. I have found Las Vegas beautiful and vibrant with life even in the midst of a desert. Where else in the whole world (perhaps except in Macao which copied Las Vegas) can you find the marvels of Venice, Paris, New York and the Pyramid all along the Stripe? It is really a fabulous city. I see Las Vegas the Shaolin Wahnam way.

Similarly, if you wake up in the morning to find the sky overcast, and you complain that it is going to rain, or when you go to work or to study and complain you are going to have a hard time ahead, you view life the negative way. If you rejoice that plants will be glad of the falling water, and you have a chance again to listen to falling rain, and that you are blessed with another day to experience the wonders of just being alive, you view life the Shaolin Wahnam way.

How can I apply the Shaolin teachings to discipline myself to train and not be distracted by worldly things?

The answer is simple, but not necessarily easy. Just do it.

In other words, apply the Shaolin teachings, not any other types of teachings. Discipline yourself, not just thinking about it. Not be distracted by worldly things, not intellectualizing on what you could have done.

However, before you “just do it”, there are two considerations to make.

The first consideration is to ensure that the teachings you apply are genuinely Shaolin. My book, “The Art of Shaolin Kung Fu” will give you a good idea. But here I can briefly describe the main characteristics of the Shaolin teachings as having noble aims and honorable means, practicing high moral values and being persistent in right effort.

The second consideration is to be clear about what you mean by worldly things, and whether it is necessary or even apporpriate to dissociate yourself from them. By convention, worldly things are those things that most people of the world normally do, like going to school to get an education, getting a job, getting married and have children, as well as eating when you are hungry and enjoying sex when the natural desire arises. Things out of the world would include going on top of a mountain to meditate or practice kungfu, and drinking off pure streams and bathing in morning sunshine.

Different people and different schools will have different perspectives concerning doing worldly and out-of-the-world things. Our Shaolin Wahnam perspective is that if we are ready (but most of us are not), we do away with all worldy things — which include delicious food and pleasurable sex — and cultivate to attain Enlightenment, or in Western terms we return to God the Holy Spirit. But while we still want to be in this phenomenal world, we cultivate so that we excel in whatever worldly things we have to do. 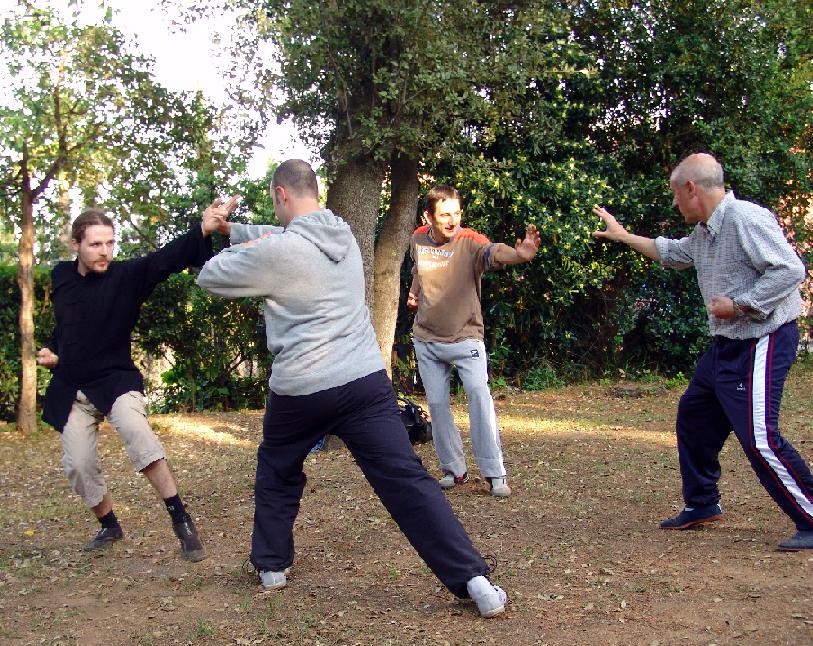 If an attack is high, “thread” it away using “Golden Dragon Plays with Water”.

I have tried to apply many meditation techniques through my life yet I can never seem to find inner peace although I feel I desire it and need it. I would be grateful if you could write me back.

If you practice meditation and cannot find inner peace, it is due to one or more of the following reasons.

What many people do not realize is that knowing the techniques does not necessarily guarantee the result. You may know some genuine meditation techniques and apply them, but you lack the skills to do so correctly. This is the main reason, though most of them may not realize it, why so many people do not get the benefits of meditation although they have practiced it for many years.

This same reason also applies to the other two treasures of Shaolin, namely chi kung and kungfu. Many people practice genuine chi kung techniques and genuine kungfu techniques for many years, yet they still do not have good health nor are able to use kungfu for combat. They know the techniques but lack the skills. In Chinese (Cantonese) terms, it is “yow kei phiew, mo kei ching”, which means they have the external form but not the essence.

I am in dire need of instruction and I wish one day to travel to the Shaolin monastery and to give up worldly things to learn what the Masters have perfected as an art over hundreds of years.

What you learn at the Shaolin Monastery today is not the kind of Shaolin Kungfu you have read in my book, "The Art of Shaolin Kung Fu". It is a modernized form of wushu invented about 30 years ago though it is based on traditional Shaolin kungfu forms hundreds of years old.

If you want to learn the kind of Shaolin Kungfu described in my book, you have to learn from our Certified Shaolin Wahnam Instructors. One of our certified instructors is actually living in the very same city where you live.

He is Sifu Anthony Spinicchia and his contact particulars are: 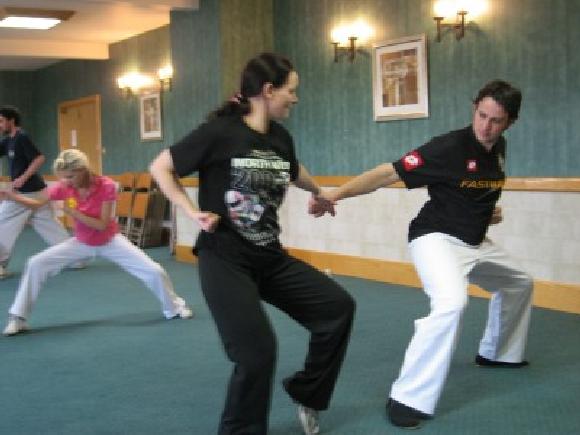 If an attack is low, sweep it way

The good news is that your problem will cease to be a problem if you don't think of it as a problem.

What is the Blocking Sutra of Hung Gar Kung Fu?

Literally a sutra is the verbatim teaching of the Buddha, initially passed down orally by recitation or chanting, but later written in books. There is no “Blocking Sutra” in Hoong Ka (Hung Gar) Kungfu.

“Block”, however, is not a good translation of the Chinese term “chiew” (Cantonese pronuciation). “Block” suggests using force against force. But “chiew”, which means “meeting an opponent's attack by shifting away the attacking momentum” may or may not use force against force.

Hence, if an opponent attacks our throat with “Poisonous Snake Shoots Venom”, which is a high attack, we respond with “Golden Dragon Plays with Water”, which is a “threading” technique (“chuin” in Chinese), i.e. we move our hand against the attack as if we are pulling a thread.

If he attacks our solar plexus with “Black Tiger Steals Heart”, which is a mid-level attack, we respond with “Single Tiger Emerges from Cave”, which is a “leaning” technique (“thap” in Chinese), i.e. we lean our hand on the attack.

If he attacks our dan tian (abdominal energy field) with “Precious Duck Swims through Lotus”, which is a low attack, we respond with “False Leg Hand Sweep”, which is a “sweeping” technique (“pheet” in Chinese), i.e. we strike his attacking hand with our sweeping palm.

As you can see, none of our responses here is a “block” which implies meeting an opponent's force with force. In all the three responses we can defend against or counter his attacks using minimum force against his maximum strength. 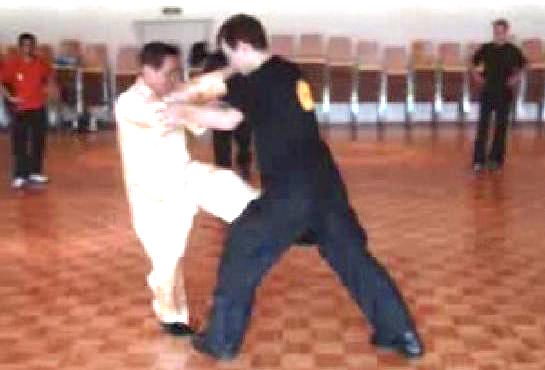 The hands open the way, it is the kick that defeats the opponent.

What are the first 3 animals practiced in Hung Gar?

Most Hoong Ka schools start with the Tiger, followed by the Dragon and the Crane. The Tiger is manifested in the Level-Punch and the Tiger-Claw, the Dragon in the Dragon-Hand Form and Palm Strike, and the Crane in various Kicks.

When I was taking Hung Gar there was something that my teacher always told us but I just cannot remember all of it. All I remember is “... hand ... foot”, I was wondering if you could finish that saying for me.

Your teacher probably said “sau hai leong moon seen, chun pang kheok ta yien”, which can be translated as “the hands are like the two swinging parts of a door, it is the legs that strike opponents”, meaning that we use our hands to open the way, and our kicks to defeat our opponents.

This saying, which is in Cantonese as most Hoong Ka masters are Cantonese-speaking, is a good answer to those who think that Hoong Ka Kungfu as well as other styles of Southern Shaolin have little or no kicks.