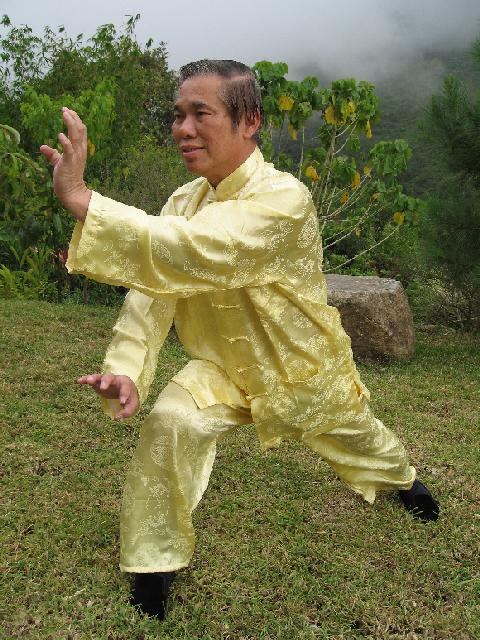 Should a Sifu treat his student like a servant, with promises of great kung fu secrets and chi power?

In reality, answers to this and subsequent questions vary from sifus to sifus and from students to students.

Some sifus in the past treated their students like servants, some with and some without promises of great kungfu secrets and chi power. Some fulfilled their promises, and some didn't.

But as an academic question, my answer is “No”. A teacher should treat his students as students, not as servants or customers. He does not merely promise great kungfu secrets and chi power, but help those deserving to acquire them.

Should a student have to pay every time he goes out to eat with his Sifu and his family?

Can a sifu try to brainwash his students with chi, and get into his students' mind with third eye power?

On the other hand, a sifu with both these skills and high morals can do so — in the sense of being able to — but he will not.

Should a Sifu use cleansing your karma to get another student into fixing his house up and paying for everything?

If you ask me or any member of our school this question, the answer is very clear. “He should not.” But some other sifus may answer differently.

Should Buddha be forced on to you, when you believe in Christ?

The answer is definitely “No”. Anyone forcing the Buddha onto another person, irrespective of whether the other person believes in Christ, is not following the Buddha's teaching. 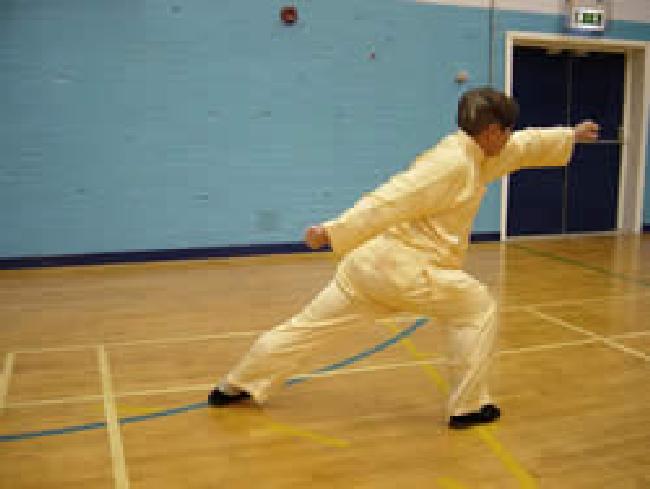 I've been working on my flexibility (stretching legs) and my right hip has been bothering me (pain wise). I went to see a doctor and he told me to rest for a week. It's been a week now, and I still feel the pain. I'm planning to go to the doctor again, but I'm sure there's another way. I've been doing “Lifting the Sky” and I'm giving it a rest, but my fear is that I'll get stiff.

This is a common mistake among many people, though they do not know about it. More than 80% of those who think that they practice chi kung, including those who practice in public parks early every morning, actually practice gentle physical exercise and not chi kung.

If one does not know what working on energy is, then he is not practicing chi kung, even though the exercises he performs are genuine chi kung exercises. In other words, he performs genuine chi kung patterns as gentle physical exercise. As mentioned earlier, a lot of people do this, just as a lot of people perform genuine Taijiquan patterns not as an internal martial art but as a gentle dance.

Pain is a indication of energy blockage. As energy is still not in the concept of conventional Wesern medicine, your doctor is unlikely to see anything wrong with you. He may give you some pain-killers which null the pain but does not remove it. The best way to overcome pain is to clear the energy blockage, and the best way to do so is to practice chi kung.

I found a medicine in your book that might help. There's just one problem. It's in Chinese. I was hoping you would translate it for me. If you have any suggestions, please feel free to tell me.

But practicing chi kung is a far better way to overcome pain and stiffness. Instead of taking the medical prescription, you will have better results by learning genuine chi kung from a living teacher. 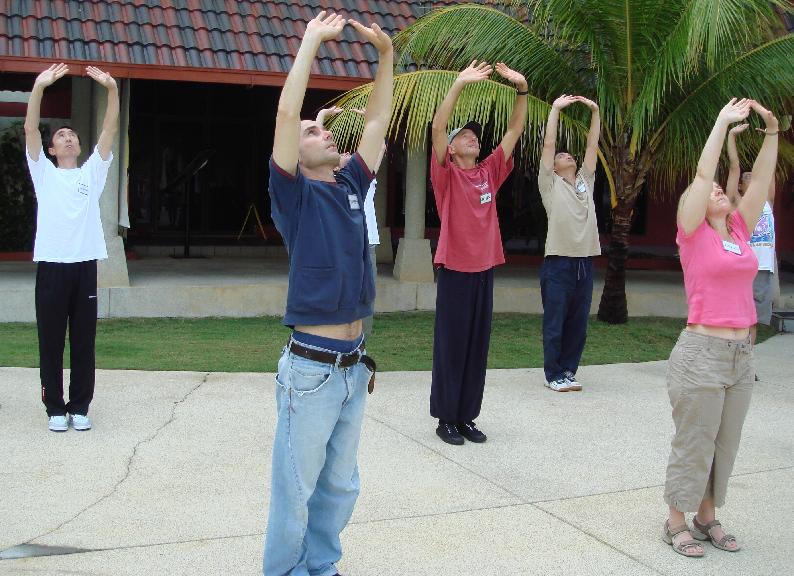 You may teach "Lifting the Sky" to your friends but do so at a physical level. This can bring them much benefit. As you are untrained to do so, don't teach your friends at an energy level, like what you have learnt at a regional chi kung course, or at a mind level, as practiced here by participants in an Intensive Chi Kung Course, because incorrect practice by your friends due to your incorrect teaching can cause them much insidious harm. The difference is not in the form but in the mode of operation. If you do not even know what this mode of operation is, it is obvious you are not ready to teach chi kung at the energy or mind levels.

I know that I cannot teach “Lifting the Sky” or “Carrying the Moon” to my friends or old parents when they ask, so I wonder if you can recommend an exercise that all the people young and old or anybody can do to have better health. So I can tell them when they ask, or just tell them so that they may want to try and train that exercise. For example, my grandfather or grandmother or my little brother.

If someone asks you to teach him chi kung, the best answer for his benefit is to tell him to attend an Intensive Chi Kung Course offered by me. If that is not feasible, the second best way is learn personally from one of our Shaolin Wahnam certified instructors. You can find a list at Certified Shaolin Wahnam Instructors. Others may think that we are trying to sell our chi kung, but honestly this is the best answer you can give to a sincere enquirer.

But if you have to teach someone, irrespective of his age or sex, the best exercise is “Lifting the Sky”. You should teach it at a physical level, and certainly not at the level or in the manner you learned from me.

Any chi kung exercise can be performed at three different levels — the physical, the energy and the mind level. When you learned “Lifting the Sky” from me at the regional course in Helsinki, you learned it first at the physcial level and then at the energy level.

Others who learn it from certified instructors at regular classes, also learn it at the physical level and the energy level. Those who attend an Intensive Chi Kung Course in Malaysia, learn “Lifting the Sky” from me at all the three levels, i.e. the physical, the energy and the mind.

On the other hand, if one practices wrongly, the adverse side effects are most serious at the mind level, less at the energy level, and least at the physical level. This is the main reason why responsible masters advise their students not to teach others until they are ready, but if they have to teach they should do so at the lowest of the physical level, which is almost like a physical exercise. This is to avoid causing serious harm to those who want to learn from untrained teachers.

Not many people understand my explanation above, although the explanation is actually very clear and straight-forward. First of all, not many people understand that chi kung exercise is different form physical exercise though the form may be the same. In other words, you can use the same form of “Lifting the Sky” and perform it as chi kung or as physical exercise.

Most people would perform it as physical exercise, although they may call it chi kung and honestly, but mistakenly, think it is chi kung. This is the main reason why so many people do not derive the benefits of chi kung like good health, vitality and mental freshness although they have practiced what they mistakenly think is chi kung for many years.

If you do not understand what has been explained above, it does not matter. But what matters, if you wish to bring some benefit to your grandfather, grandmother, brother or whoever you wish to teach chi kung to, and avoid causing insidious harm, is to teach only the form of “Lifting the Sky”, and ask them to perform it gently with natural breathing.

Ask them to repeat the exercise about 30 to 40 times. It is very important that they must be relaxed and not to worry about anything. After about 30 to 40 repetitions, they just stand upright, be relaxed, think of nothing and just enjoy being alive. If they do this everyday for six months, they will have good results.

They may even say the results are fantastic, as many who had learned from my books said, although the results are nothing compared to what our students get from learning personally from our certified instructors or from me. Their results are also remarkable compared to those who merely perform physical exercise though they mistakenly think it is chi kung.

I am going to train Hung Gar or Choy Lee Fut soon. I feel Bagua is not really for me. Please, Sifu, can you tell me what are the difference of these two arts?

I choose to use “Hoong Ka” instead of “Hung Gar”, and “Choy-Li-Fatt” instead of “Choy Lee Fut” because my choice gives a better chance of a more exact pronuciation. Both Hoong Ka and Choy-Li-Fatt are beautiful arts derived from Shaolin Kungfu.

Hoong Ka is named after Hoong Hei Khoon, although most Hoong Ka practitioners today actually desceneded from Lok Ah Choy. Both Hoong Hei Khoon and Loh Ah Choy were two of the ten great disciples of the Venerable Chee Seen, the abbot of the secret southern Shaolin Temple on Nine-Lotus Mountain burnt by the Qing Army in the middle of the 18th century.

The forms of Hung Ka and Choy-Li-Fatt are more similar than different. This is no surprise as both developed from Southern Shaolin. Stances in Choy-Li-Fatt, however, are usually wider, and its practitioners use extended arms in swinging movements more frequently. Comparatively, both its attacks and defences come more in an arc, whereas those in Hoong Ka are more linear.