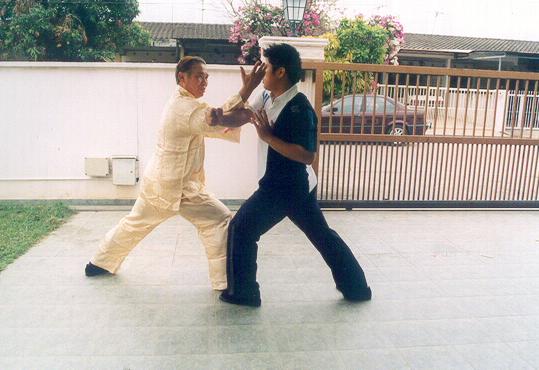 I will first of all state that it is an honor to correspond with you. I have been practicing Kung Fu of several styles both for performance and application sparring for a little over 14 years now.

Many resort to borrowing techniques and methods from other martial arts, like Taekwondo and Kick-Boxing, to rectify their lack of kungfu combat application. Some may have become formidable fighters using these borrowed techniques, but they still cannot use kungfu for combat. Some even go to the ridiculous extent of saying that kungfu forms cannot be used in combat, and that using Kick-Boxing is kungfu.

Though you have not stated it, I suspect that you are one of those who use other martial art techniques, probably Kick-Boxing, instead of kungfu in your sparring. Your attempt to rectify the inadequacy of kungfu combat application is admirable but your action is mis-directed. You should attempt to use kungfu forms for sparring instead. You have spent 14 years practicing kungfu forms. It is worth to spend one whole year to learn and practice genuine kungfu combat application, so that what you have learnt all these years will not go to waste.

I have posted a lot of videos on my website, not only showing but also explaining secrets that masters in the past kept only for their top students. By following and practicing the examples shown in the videos, you can attain a reasonable level of kungfu combat application.

And many have the perverted view that one must be willing to take some hits and kicks to learn a martial art. It is certainly not true. In fact a main reason why any person learns a martial art is not to be hit at all. The big irony is that not only many martial artists cannot defend themselves despite their training; they become more unhealthy due to sustained injuries in free sparring.

I have in the past couple of months started practicing Qi Gong breathing of several types for all of its benefits, mental, physical, etc.

However, one thing that always has tugged my interest is Qing Gong. Yet it is so hard to find information on it. I have traveled through China for several months training, and most of the time when I ask about it I just get laughs or basically that it is a lost art of China.

Qing-gong is the “art of lightness”. One of my grandmasters, i.e. one of my sifu's many sifus, was a qing-gong expert. He could jump up a wall of ten feet on the spot. My sifu, Sifu Ho Fatt Nam, personally witnessed this feat, but only once.

My sifu also witnessed another feat of qing-gong. When he was a small boy he lived by a river. One morning he saw an old master run across the river, with the water coming to his knees' height. My sifu knew the river was deep. My sifu waited everyday for the old master to appear again, but he never did.

The instructions for qing-gong are actually quite simple. As in any internal art, it is not just the instructions that is crucial, it is how you practice them. This is a fact, or a secret if you wish to call it so, that many people, especially those in the West, may not realize.

For example, one of the instructions in qing-gong is to bring your chi up as you jump. You know the instruction but you may not be able to do it, or worse you may do it wrongly, which often is the case and which may bring serious adverse effects. 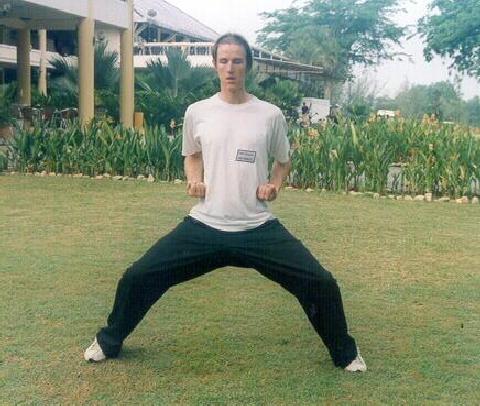 Chi kung is found in all styles of kungfu, and right at the beginning. It is found in stance training, particularly the Horse-Riding Stance, demonstrated here by Sifu Michael Durkin of Shaolin Wahnam England.

I know at my age, a little over 18, it would be almost impossible to train myself for something like Qing Gong, which from what little information I have gathered consists of training the body and Qi Gong from a very young age.

Both my sifu and myself started qing-gong training when we were over 18. Qing-gong could be trained at any age.

But the student should not be too young. If he is not physically and mentally matured, he would lack the physical and mental control necessary in the training. Worse, the training may adversely affect his natural growth even when he follows the instructions correctly!

Thus, even from this short description it is evident that there is much more in qing-gong training than what is given in some written instructions. After knowing this, if you still persist on trying to learn qing-gong without the supervision of a competent instructor, you would be very unwise.

Nonetheless, any information on the subject, anything to sort of train my body for an increase of balance, stamina, speed, jumping ability, etc. would be extremely appreciated.

You don't have to undergo specialized qing-gong training to attain these benefits. Any kungfu training, even practiced at a physical level, will improve balance, stamina, speed, and jumping ability if practiced correctly.

If you still long for these qualities, despite having trained various styles of kungfu for 14 years since you were about 4, it shows that you have not been training correctly.

But this is no surprise. Indeed most kungfu practitioners today lack these qualities despite having trained for many years. This shows how badly kungfu is being practiced nowadays.

I understand that focusing your Qi is a lot of what Qing Gong is about, and surprisingly to me, only after 2 weeks of daily practice of Qi Gong I have been able to feel and move energy around my body given enough time and concentration. In fact, I had extremely odd and slightly life changing experience doing Qi Gong in the Cave of the Eight Immortals in the Kunyu Mountains.

While I congratulate you for your remarkable experience and your ability to move chi around, I need to warn you that attaining these on your own in a short time may not necessary be a good thing. Even if we presume that you moved chi around correctly, you lack systematic training and proper control. Would you, for example, be able to control your chi movement if it started to move wildly?

You also lack the knowlege and experience to know whether your method is harmful even when it produces the result you want. Take an example of someone wishing to break a brick with his fist. By repeatedly hitting his fist into a sandbag he manages to harden his fist and develop sufficient force to break a brick with a punch.

Many martial artists try this method and succeed in breaking bricks. But what they don't realize is that they have harmed their hands and indirectly some internal organs in their training. If many people are not aware of the harm done in an overt method like punching a sandbag, it would be worse in an internal method like moving chi. 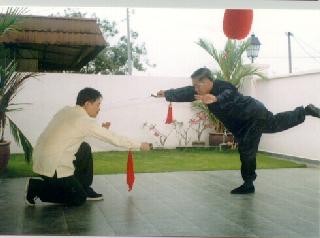 Anyways, any info on Qing Gong — history, training methods, where to find a proper master, etc. — would be so amazing.

Genuine chi kung masters are rare. Genuine masters of qing-gong, which is a specialized branch of chi kung, are rarer still. But even if you can find a qing-gong master, it would be extremely naive of you to think that he would teach you simply because you want to learn.

If masters do not easily teach you the essence of such a basic skill like stance training whereby you can develop internal force, or kungfu application whereby you can defend yourself — with the result that today most kungfu practitioners, including masers, have neither internal force nor kungfu combat aplication — you can imagine how difficult it is to find a master teaching you qing-gong.

You may combine “Yi Jin Jing” with other Shaolin Wahnam exercises like “Lifting the Sky” and “Carrying the Moon”.

From your e-mail it is quite obvious that you are practicing chi kung forms not as chi kung but as gentle physical exercise. This, in fact, is common amongst many chi kung practitioners, including instructors.

Let me explain as follows. Suppose you practice the chi kung pattern called “Lifting the Sky”. You follow the instructions as described in my books. You perform the physical movements and breathing correctly, i.e. according to what you think is correct. After about 20 repetitions you stand still. You do not feel anything special except that your joints and muscles are loosen. In this case you practice “Lifting the Sky” as gentle physical exercise.

Now suppose you practice “Lifting the Sky” the same way, i.e. according to what you think is the same way. After about 20 repetitions you stand still. But you find that your body sway gently. You let go and enjoy the sway. You feel something special, like some tinkling sensations at your finger tips, being energized and peaceful. In this case you practice “Lifting the Sky” as chi kung.

The forms of the 12 exercises are the same in our school as in other schools. But we choose just 1 of the 12 exercises, and repeat it just 3 times. In other words, in our Yi Jin Jing training, we perform only 3 repetitions, whereas most other people would perform 588 repetitions (12 x 49). Yet, the internal force we generate from the three repetitions is so tremendous that this exercise is nicknamed by Andrew (Sifu Andrew Barnett) the “Wow Exercise”.