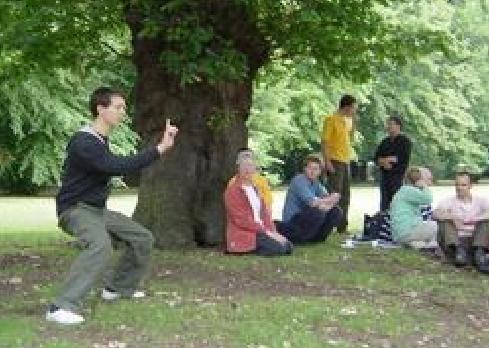 I am currently studying Shaolin Kung Fu. I have read your book, “The Art of Shaolin Kung Fu”. It was amazing! I absolutely enjoyed it 10,000%. Anyway, I was watching a Bruce Lee movie, and I had a thought whether one could be a master of practical martial arts and theoretical martial arts if practiced enough. I ask this because I am deeply interested in both and would like to keep studying this art my whole life.

I am glad you like my book, “The Art of Shaolin Kung Fu”.

Martial arts are basically practical, though theory also forms an aspect. For convenience, we may divide any martial art into four aspects, namely form, force, application and philosophy.

One of the best pieces of advice my sifu, Sifu Ho Fatt Nam, told me was that we practice kungfu, not merely learn it. This advice reflects on the practicality of Shaolin Kungfu, or any martial art: we practice the form, the force and the application of the art, not merely learn its philosophy. Even if you know much as well as deeply about the philosophy, but if you are not efficient in the practice of the form, force and application, you would be a poor martial artist.

Nevertheless, this does not mean that philosophy is not useful. Indeed, knowing this philosophy that a martial art can be divided into four aspects in its training, not only prevents you from wasting a lot of time but also enables you to get the best from your training.

Most kungfu students, for example, spend most of their time practicing only form, with little or no force training and combat application, and know little or no kungfu philosophy. From our perspective in Shaolin Wahnam, we do not call that kungfu, we call that kungfu forms. In the past this was referred to as “flowery fists embroidery kicks”.

To get the best results, besides defining your concept, you should also define the level you aim at and the methods you use. If you have no awareness of this, it is most likely that you will end up using low level methods to become a low-level master of Shaolin Kungfu after practicing daily for ten years. In our opinion (others may disagree) an example of a low level method is to tense one's muscles in training, and an example of a low-level Shaolin master is one who takes pride in beating up people.

One of my dreams is to train with great masters of this art such as yourself, and masters of the great Shaolin Temple today. I believe that your help can guide me there.

If you read my website or our Shaolin Wahnam Discussion Forum freqeuntly enough, you would have noticed that while we have great respect for Bruce Lee, we do not consider his art as Shaolin Kungfu, and also that our views of genuine, traditional Shaolin Kungfu is vastly different from that of the masters from the Shaolin Temple in China today.

Hence, to use your time most effectively, you would have to decide which art you would pursue. You should visit the websites of Jeetkwondo masters and of modern Shaolin monks to find out what they say and teach, before making a decision.

I have intestine problems. Is it possible to cure it with chi kung exercises, like “Lifting the Sky"?

Yes, it is possible to cure your intestine problems by practicing a chi kung exercise like “Lifting the Sky”. In fact, many of our students have done this, including those who were told that their diseases were “incurable”.

It is possible because conventional Western medicine and chi kung use different paradigm. In other words, conventional Western doctors and chi kung masters look at health and illness differently. Because of this, they use different methods to overcome illness and have different success rates. In many cases of intestine problems, Western doctors do not know the cause of the problems. Therefore, they consider such diseases incurable as they do not know what to cure.

However, this does not necessarily mean that if you practice “Lifting the Sky” you will certainly overcome your intestine problems. This is an important fact that many people may not realize. Many people mistakenly think that if chi kung can overcome a certain disease, by practicing chi kung they can certainly overcome the disease. A rough analogy is as follows. By doing business, you can become a rich man. But this does not necessarily mean that if you do business, you will certainly become a rich man.

Another reason is that even if you practice correctly, the effect you get from “Lifting the Sky” may not be strong enough. Those who have no exposure to high level chi kung, will find this reason puzzling. They wonder why even if they practice correctly, their effect is not powerful enough to affect a cure when others practicing the same exercise can cure themselves of a similar illness.

You may be doing business correctly, but if you are not skillful in salesmanship, you will not become a rich man. Suppose your selling skills are of a low level, you have to give a lot of discount to make a sale, and you manage to make only a few sales a week. If on an average you earn $200 per sale, and sell 2 used cars per week, you will earn about $1600 per month, which is unlikely to make you a rich man. Now, suppose your selling skills are of a high level, you earn $1000 per sale, and you sell 5 used cars per day, you will earn about $150,000 a month, which will make you a rich man.

Both sell used cars correctly, but the low-level businessman earns $1600 a month, whereas the high-level businessman earns $150,000. Although both are in the same kind of business, one earns enough just to survive, the other earns enough to live comfortably. Similarly, both practitioners may practice “Lifting the Sky” correctly, but the low-level practitioner derives enough benefit just to keep alive, whereas the high-level practitioner derives enough benefit for radiant health, vitality and longevity to enjoy life.

If you learn chi kung from books, videos or mediocre instructors, you are likely to practice it at a low level. To practice at a high level, you have to learn from genuine masters. 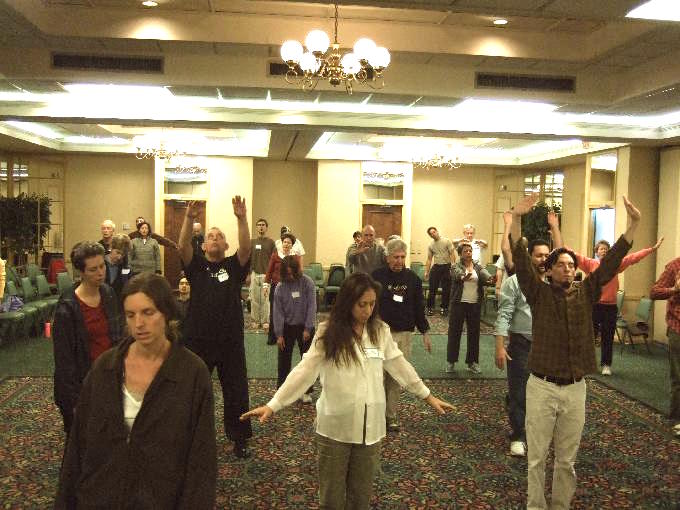 Participants at the regional chi kung class in Florida, USA in December 2006 performing Lifting the Sky. Some of them are already enjoying a chi flow.

Is it possible that I can reduce the force of the steps I make during chi flow with my mind? I know it is not natural if a practitioner does such things, but I think it makes it easier for me to slow down my chi flow into a gentle one.

Of course, you can use your mind to reduce the force or speed of your chi flow. It is perfectly natural. In fact, using the mind to get better results in chi kung or kungfu is a hallmark of our Shaolin Wahnam practice.

I am in desperate need of more information about The Taiji Patriarch which is posted on your web site. Is this title on DVD/VHS or soon to be released?

Yes, “The Taiji Patriarch” is on DVDs and CDs. You should be able to purchase them from a good video shop or online.

I received the package of CDs as a gift from my disciple, Zhang Wuji, from Singapore. I was impressed with the martial art movements shown on the CDs and was pleasantly surprised that the techniques used by the Taijiquan Patriarch, Yang Lu Chan, in the video were similar to what we would use too in our Wahnam Taijiquan.

This is an excellent movie showing the effectiveness of Taijiquan as a martial art, not only against kungfu exponents but also against masters of other martial systems. The movie also shows traditional Taijiquan training methods, which may surprise many modern Taiji dancers.

Please note that there is another good kungfu movie also called “The Taiji Patriarch”. This second movie is starred by Jet Li and depicts the story not of Yang Lu Chan but of the First Patriarch, Zhang San Feng. While this movie also shows some excellent kungfu moves, personally I prefer the one on Yang Lu Chan.

Thank you for replying to my email in the past. I followed your advice and overcame my hamstring injury. I hope you can help me with my current problems.

I am glad my advice has been useful. Being able to hold a Horse-Riding Stance for 20 minutes is a remarkable achievement. It shows you have been diligent in your practice. But remember that stance training is a relaxation exercise; it should never be taken as an endurance test. 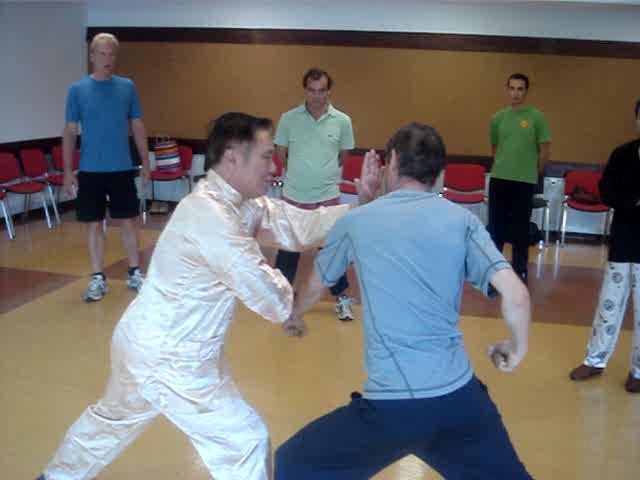 I read somewhere that these problems are due to defciency in kidney Yin.

Your case is more likely to be overflowing in kidney yang. Although an excess of either yin or yang is generally unhealthy, in special cases like yours when teenagers are growing, overflowing of kidney yang is normal.

I've been practicing One Finger Zen, Horse Stance, Pushing Mountains, and Lifting the Sky, and felt great when doing these exercises. My punches feel very, very powerful after doing the Horse Stance and One Finger Zen, but I could be practicing wrongly. Could you suggest any appropriate qigong exercise to strengthen my kidneys?

I presume that you learn these kungfu and chi kung exercises from books. Follow the instructions respectfully and don't worry or intellectualize while practicing the exercises.

As mentioned above, yours is a case of overflowing kidney yang. Hence, your concern is not to strengthen your kidney, which may make your situation worse. What you should do is to let your excess energy, or kidney yang, spread. A good way to do so is cut down your exercises you have been doing, and spend more time on chi flow.