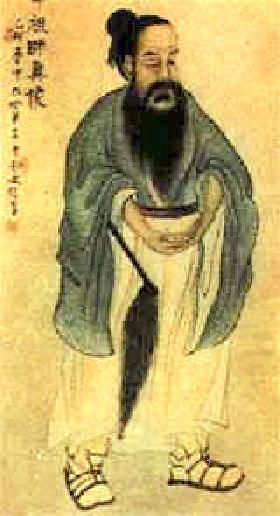 The great Zhang San Feng, the Patriarch of Internal Arts. This picture is reproduced from http://hexagramme-limoges.chez-alice.fr/hexagrammetaichi4.htm

This question has been in my mind for several months now:

Is there a possibility that some 60-70 years ago, the Great Zhang San Feng, seeing the art of Shaolinquan and Taijiquan had been degraded so much, and out of his compassion to the people in this world, then decided to temporarily return to this phenomenal world, and chose to be born in the Wong family in Penang, Malaysia, to bring back the glory of Taijiquan as well as Shaolinquan, and then spread the arts for all deserving people in the world, not only in China, irrespective of race, culture, and religion?

Thank you for the great compliments. Flattering myself and preparing to face ridicule from many people, especially Taijiquan practitioners, I would say your suggestion is possible.

Is it possible to know who, where, and when, of a person in previous life times, through one's practice of chi kung?

Yes, this is also possible.

Indeed, in some cases of students who had deep-rooted problems not readily solved by chi kung practice, I successfully led them to relive their past lives so as to erase the negative imprints on their consciousness, eventually freeing themselves of the problems.

Many years ago a successful managing director of a trading company in Malaysia was always sad and brooding. He had a good family and was healthy, but he was never happy and did not know why.

During meditation I led him deep into his consciousness where imprints of his past lives were stored. He was of course not aware of these imprints while in his ordinary consciousness, but they affected him pervasively.

He relived one of his crucial past lives. His facial appearance and his voice changed noticeably. He found himself standing alone in a big battle field with a sword in his hand, and with thousands of dead bodies around him. He confessed that he was a commander and was responsible for the countless dead. He cried.

I managed to help him clear his guilty feelings, or, as described in some literature, to cleanse his bad karma. After that healing session, he could live a happy life.

In another case, a woman in Spain always felt cold irrespective of the surrounding weather. In her meditation, I led her back to a past life.

She said she felt very cold, and all around was pitch dark. She could not see anything. I encouraged her to continue her description.

She said she was dead, and people were carrying her in a box. After that experience, she recovered from her problem. She did not feel cold any more.

Could you please share with us your experiences sparring Shaolin Quan with Si Gung Ho?

My sifu, Sifu Ho Fatt Nam, was small-sized but extremely agile and powerful. On some occasions I thought I would have caught him, but with a seemingly effortless twist, he turned the table on me. However, he had excellent control of his force, and I was never hurt.

However, on one occasion, he poked a finger gently on my stomach, but the excruciating pain went deep inside. He did not notice I was in pain, he thought it was a gentle touch! 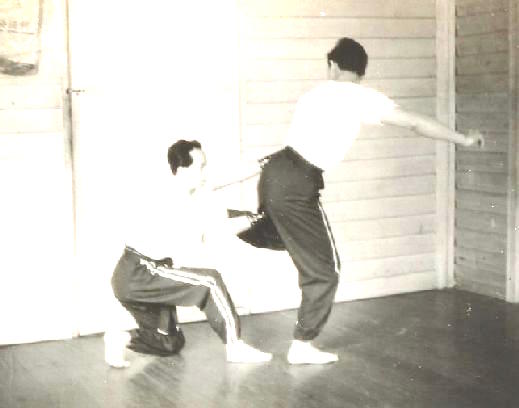 My mom has been recently diagnosed with breast cancer. Currently, she is being treated with radiation, chemotherapy, etc. My mother and I would prefer an alternative approach though, i.e. one that would treat the underlying cause of the disease and not just the symptoms, just like you mention in your webpage and article on cancer.

I am contacting you to sincerely ask if there is anything you can do in your opinion that can help my mother win the battle against cancer. She is getting weak from the disease and treatment lately, probably it is too late now for her to travel to see you personally in Malaysia, or attend any of your courses for any direct, immediate benefit, but we have this in mind. As soon as she gains any strength she would love to subscribe to one of your courses.

I am sorry to hear of your mother's illness. But cancer can be overcome, and I myself have helped many people overcome cancer.

The most important factor in your mother's recovery is her will to live. She must want and believe that she can overcome cancer. In Chinese medical philosophy, all recovery starts from the “heart”, which means the mind.

The following exercise will be useful to her. Stand upright and be relaxed. If it is too tiring to stand, the exercise can be performed while sitting down. Smile from the heart. Don't worry how, but just do it.

Raise the hands up again and pray to God or whatever name the Supreme Reality is called for strength and help to overcome the illness. Pray sincerely from the heart, and the prayer will be answered.

Then drop the hands and close the eyes. Don't do anything and don't think of anything. But gently feel that God's strength and grace is flowing through the body. If the body sways, follow the movement. If it doesn't move, it doesn't matter.

This exercise looks simple but it is very profound. If your mother can do it in a meditative state of mind, she is literally letting God cleanse away her illness, and then receiving God's strength and grace. Perform the exercise once in the morning, once in the evening and once at night.

There is no fixed time per session. It may last between 5 minutes and 20 minutes or more. At all times don't habour any bad thoughts. Have good thoughts and be assure of recovery.

She does not need to attend my Intensive Chi Kung Course in Malaysia. It is too powerful for her. If she learns from me at regional courses, it is enough for her to take only the first course, namely “Generating Energy Flow” or sometimes “Eighteen Lohan Hands”. She does not need to take the other courses. Just “Generating Energy Flow” is enough to help her recover and give her good health and longevity.

I read your book: “The Complete Book of Zen”, and this book is very interesting and I like it a lot. I practice Aikido and also work with “ki”. Is Aikido the same martial art and spiritual art as Shaolin Kung Fu?

Aikido talks about spiritual cultivation, but the popular Shaolin Kungfu normally does not do so. Some of these teachers, like the modern Shaolin monks, talk about “Chan”, which is the Chinese word for “Zen”, but their philosophy is quite different from “the way of harmonious energy” of Aikido.

Aikido talks about “ki”, which is the Japanese word for “chi”, but popular Shaolin Kungfu normally does not so so, although some of their teachers may mention “chi” in passing. For some odd reasons, some masters of popular Shaolin Kungfu even regard “chi” as belonging to the realms of the internal martial arts like Taijiquan and Baguazhang. At the most, they may talk about “jin”, which can be translated as “internal force”.

Aikido is also different from the rare variety of Shaolin Kungfu. Aikido talks about spiritual cultivation but, interestingly, its practitioners do not normally practice it. For example, although the spiritual teaching of Aikido is based on “harmony-energy-way”, which is actually the word-by-word meaning of “Aikido”, not many practitioners know what this actually means, let aside have direct experience of this teaching.

When an Aikido exponent defeats an opponent, his techniques are “soft” but external. He makes use of momentum and leverage. For example, when an opponent throws him a mid-body punch, instead of blocking it head-on as some Karate or Taedwondo practitioners may do, an Aikido practitioner grips the opponent's arm following the punching momentum, swings him around and throws him onto the floor using leverage. Hence, he defeats his opponent with a skillful use of mechanical movements.

An exponent of rare Shaolin Kungfu can do this if he wants, but normally he prefers other methods. He may ward off the punch with one hand, and strike the opponent with the other hand using internal force, not just mechanical movement. Or he may grip the vital points of the attacker's arm, again with internal force. Hence, the nature of their methods is different. Aikido exponents use mechanical leverage, whereas exponents of rare Shaolin Kungfu use internal force, which is a function of chi flow.

I am looking for a place to study Tai Chi intensively for one or two months. A friend recommended Wong Kiew Wit to me, and I am wondering if he only gives short courses, or if it is possible to also study with him for a longer time.

Although I have received some requests, I am not offering any Tai Chi Chuan (Taijiquan) Intensive courses this year (2007). The main reason is that I have more courses than the time to teach them.

I am now only teaching short courses of a few days, and not regular classes. If you wish to practice Tai Chi Chuan or chi kung on a regular basis, please contact our certified Shaolin Wahnam instructors. Their particulars are found at https://www.shaolin.org/general/instructors-list.html. 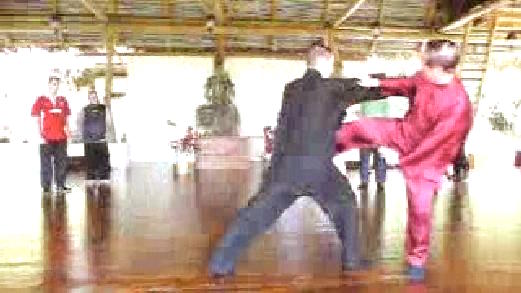 Grandmaster Wong executing a whirlwind kick, known in Wahnam Taijiquan as “Swaying the Lotus”, at Sifu Robin during a regional Taijiquan course at the Guan Yin Temple on the Blue Mountain in Costa Rica

As I am also interested in the Qi Gong short courses, I would like to know what exactly you mean by a one-pointed mind, and for how long a participant is granted to be in this state after the course.

If you wish to learn chi kung from me, a good choice is to attend my Intensive Chi Kung Course. Please check my website for the dates of the coming course.

Having a one-pointed mind means that the practitioner is focused and clear. He is free from irrelevant thoughts. When the mind becomes one-pointed, it becomes very powerful, enabling the practitioner to have better results whatever he does. He is also calm and relaxed. Such a mental state is known as a chi kung state of mind.

Attaining a one-pointed mind is one of the first skills students learn and acquire in my Intensive Chi Kung Course. It then enables them to tap energy from the Cosmos, generate an internal chi flow, and direct chi to wherever they wish inside their body.

Having a one-pointed mind is a special skill. When you have acquired this skill, you can use it whenever you wish and for however long you like provided you can maintain the skill. If you are working on a scientific project, for example, you can, and should, remain in a one-pointed mind for the whole length of the project. You can produce better result in much shorter time than other people with distracted mind working on the same project.

When you play games or engage in sparring, having a one-pointed mind will enable you to see your opponents' movements clearly, make judgment and decisions wisely and quickly, and respond correctly and effectively. Irrespective of whether you are performing mental or physical tasks, you will also not be tired physically and mentally because you are relaxed while being focused.

Is the course only for beginners?

My Intensive Chi Kung Course is suitable for all people, ranging from fresh beginners to masters. As my teaching is multi-level, participants will benefit according to their own developmental stages.

Beginners, for example, will learn to attain a one-pointed mind, with which they can generate an internal energy flow to overcome illness, maintain good health, enhance vitality and attain longevity. Advanced practitioners can expand their mind and derive spiritual joys.