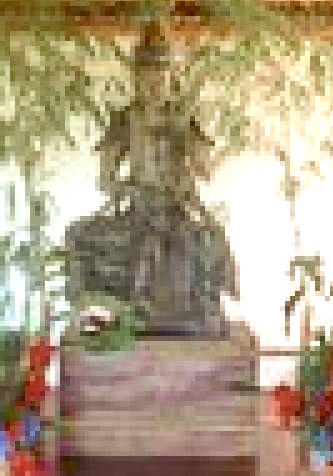 A priceless 14th century statue of Guan Yin Bodhisattva in the Shaolin Wahnam Centre on the Blue Mountain in Costa Rica. The image of Guan Yin as people in the 14th century perceived may be quite difference from what people now perceive.

As I was reading Answer 1 of the January 2002 Part 2 Q&A, I was confused about what you defined as the Saha world. You state that: the Saha world corresponds to the solar system and there are different beings living in it.

According to the Buddha's teaching, our world system is called the Saha world. The Saha world is much more than just the earth, and includes the solar system. Many living beings inhabit the Saha world, and they belong to six classes:

I was confused by this statement because the known universe that humans are able to observe is much more than just our solar system. Wouldn't the Saha world encompass all of the stars in our galaxy and all of the distant galaxies that astronomers observe as well? Is there something that I have not understood?

In Buddhist cosmic terms, the Saha world is just like a grain of sand along the beaches of River Ganges. It is amazing that the Buddha taught about this cosmic fact centuries before highly civilized Greeks thought the sun moved across the flat earth.

But when we talk about the Saha world, we talk at a metaphysical level, that is beyond the physical as modern science understands it. For example, when you look around you, there are literally countless sentient beings sharing the same space with you. Some of these sentient beings, like micro-organisms, belong to our physical world that modern science understands. You can see them with the aid of a powerful microscope.

But there are also beings that you cannot see, even with very powerful microscopes, and whom modern science does not understand. Some examples are ghosts, nature spirits, fairies, titans and gods. They exist at the same space and time as we do, but because they vibrate at very different frequencies, we normally do not see them.

Once when I was returning home from an oversea teaching tour, layers of clouds covered the land where the plane was about to land. As I looked through the window in the plane, I could only see white clouds. Then the clouds parted and I could see the scenery below.

In the same way a ghost hovering in space would not see our earth. Our earth and all the myriad things on it would be his “atmosphere”. He would see ghostly dwellings and ghostly scenes as well as ghostly beings, and all these exist at a space which we would call “underground”.

But just as we are not normally aware of ghosts who exist in our underground, and gods who exist in our atmosphere, they too are not normally aware of us. To gods, we live in their underground, and to ghosts, we live in their atmosphere. Interestingly, scientists are beginning to suspect there is much more to what they can perceive at a physical level. They call all these shadow matter.

Our earth, with its different metaphysical dimensions, is only a part of the Saha world. Our Saha world is only a minute part of our galaxy, and there are countless galaxies in our universe. One such world that exists many light-years from us in a distant galaxy that we know quite well is called Sukhavati, or Happy Land, but is better known to us as the Western Paradise. The Buddha residing there is called Amithaba Buddha, who is different from the Buddha of our Saha world who is Shykamuni Budda (or Guatma Buddha).

Also, am I correct in assuming that some of the six classes of beings that you mentioned such as hell beings, heaven beings, titans, and ghosts reside in realms that most of us humans are not able to observe, but overlap our perceived universe?

Yes, what you said is true if what you mean by “our perceived universe” refers to the Saha world. These six classes overlap in our realm of existence, but normally we cannot see one another.

But there are also beings besides these six classes, like Arahans and Bodhisattvas who are of a very high spiritual level. These very highly spiritual beings observe us and protect us.

I am sorry my knowledge of beings in other worlds and other galaxies is limited. But what I know is that every one of the countless worlds in the countless galaxies in our universe is full of sentient life, and in every world there are Buddhas and Bodhisattvas. 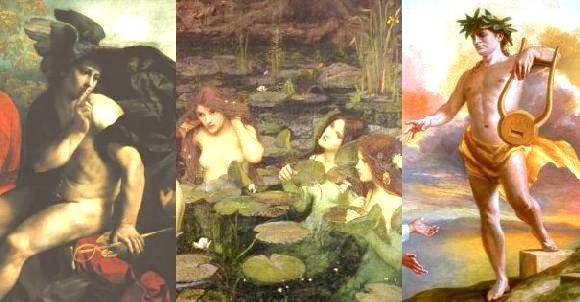 An image of nymphs and a god as perceived by people in the West. This picture is taken from www.Winterscapes.com/

Were the ghosts all at one point humans or is it possible that they were other sentient life forms in a previous life?

Ghosts might be human or non-human in their previous lives. They could be other sentient life forms in a previous life.

It is not usual for humans to see ghosts but those seen by humans normally were also previously human. And the ghosts would also have forms resembling those of humans. I believe if a cat sees a ghost, it would likely be in the form of a cat.

This is because ghosts like humans, heavenly beings and all other living as well as non-living entities we perceive in our phenomenal world are creation of mind, and the human mind has been conditioned through millennia by the collective human consciousness. Other beings are conditioned by their own collective consciousness.

In the same space but which we normally cannot perceive, ghosts, gods and other beings will mainly see beings of their same type. They too may have a mistaken view that they are the majority in their world, not normally realizing that countless other beings possibly of very different forms and nature exist side by side at the same time.

If intelligent life were discovered on another earth-like planet in our universe that was capable of creating an advanced civilization, how would they fit into the six classes of beings?

In the Buddhist teaching, there is no doubt that intelligent life exists everywhere, including in planets that resemble our earth.

I am sorry that with the exception of the Western Paradise which is located in another galaxy many light-years from our world, I know little about life beyond our Saha world.

But even in our Saha world, the six classes of beings are not the only life forms.

In the realm of non-form are very highly developed spiritual beings like Bodhisattvas and Arahans. These beings have no desire and no form; they exist as pure spirit. Hence, they may actually merge into Cosmic Reality attaining Buddhahood. They may also manifest themselves in the realm of desire or the realm of form if they wish. Bodhisattvas often do that, coming down to lower levels of existence to help other sentient beings. These beings are not limited to the Saha world. They may travel to other worlds in other galaxies at will.

The Western Paradise is not in our Saha world. It is in another galaxy watched over by Anitabha Buddha, who is different from Shykamuni Buddha (or Guatama Buddha) of our world. There are no lower beings like ghosts, titans or animals in the Western Paradise. All the beings there are heavenly beings. There is no sorrow there; it is a world of eternal bliss.

I have a question regarding you accepting students. I do not mean those at the short intensive courses but those who wish to study the art directly with the master for life time commitment. So how do you, Sifu Wong, accept such students? What are the qualifications and how much does the student require to pay for the fees?

Genuine masters do not accept students straightaway for life time commitment. The students first have to prove themselves worthy for the masters' teaching. The masters may then single them out for special teaching.

Now I do not even teach regular classes. Students learn from me at regional classes or intensive courses. Or they may learn from my students who are instructors.

Those who have proven themselves in their dedication as well as in character may be chosen to attend special courses taught by me. The outstanding amongst these may be trained to be instructors or as inner-chamber disciples.

There is no formal initiation. The process develops naturally. Hence the question of fees is irrelevant. But the most important qualification is that they follow and practice the Ten Shaolin Laws. 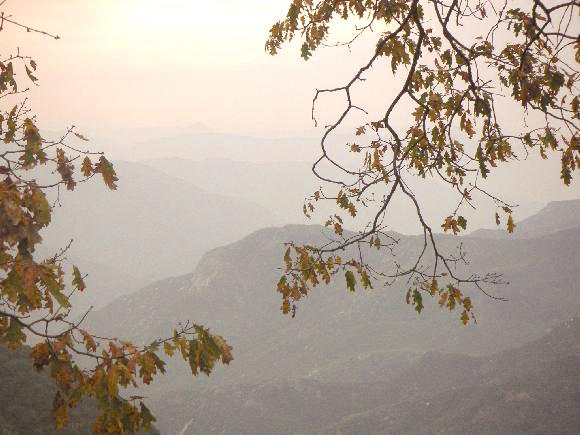 A beautiful scene in California perceived by Sifu Wong and Sifu Anthony Spinicchia in 2005. The “same” scene will be perceived differently at different times or by different beings at the same time.

Why do teachers not teach in full the true application and meaning of the many forms that they teach? Is this not a dis-service to the arts as well as themselves and the hardworking, committed student?

Here are some possible answers:

Whether it is a dis-service or not, depends on a few variables. For example, if the teachers are incompetent or selfish, it would be a dis-service. If the students are undeserving or have not reached the required level for the teaching, the teacher is right in not teaching them.

I am very interested in learning traditional Shaolin Kungfu. Is it possible to do so in the Shaolin Monastery? If not, which is the best academy or institute to do so in China?

It may be a matter of semantics, but you should practice rather than learn Shaolin Kungfu. A crucial difference is that learning is academic, whereas practicing is experiential. In other words, when you learn something, you know its theories and philosophy. When you practice something, you experience its benefits.

In Shaolin Kungfu, as well as Taijiquan and chi kung, 10% is learning, 90% is practicing.

Another point I wish to highlight is that merely being interested in learning is insufficient. You must be dedicated to practice, practice and practice. And if you wish to have good result, ensure that what you practice is of a high quality, and that you practice correctly.

If you practice wrongly, you get harmful side-effects instead of benefits. If you practice a low level art correctly, you have little result despite having spent a lot of time.

But if you wish to learn modernized wushu, China is an excellent place to search for a good school. Modernized wushu is a magnificent art, but it is not traditional kungfu.