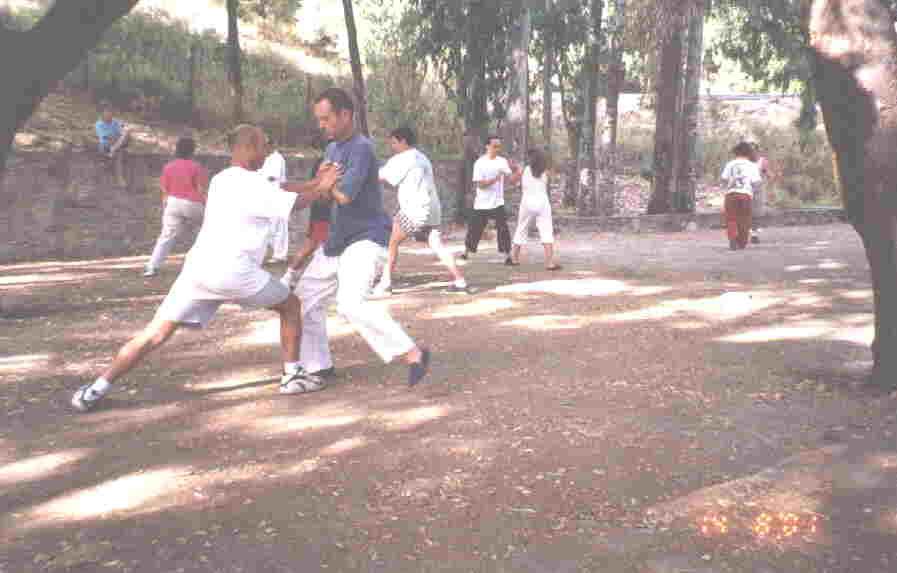 Differentiating between Taijiquan and Chi Kung is actually easier done than explained. As Taijiquan is a martial art, the above picture shows Taijiquan in action as the practitioners are engaged in some combat training.

I have sustained an injury on my leg from my wushu training four months ago. Ever since that day I have felt pain whenever I do high front kicks or stretch kicks using my right leg. I think that it is due to a hamstring injury.

In traditional Chinese medical terms, your injury and its resultant pain are caused by energy blockage. Until this blockage is cleared, the pain will remain there, even if your hamstring has recovered.

Such a situation is in fact not uncommon. The energy may be caused by various factors, such as a virual attack, a physical blow, some emotional stress, or dead cells left behind after a surgical operation. Even when the illness or injury has been overcome, if the blockage is not cleared the pain still remains. The pain usually becomes noticeable or worse when the weather becomes damp.

The best way to overcome such pain is to practice genuine chi kung. If the energy blockage is not deep or old, the pain can be eliminated quite easily. Some of my chi kung students had suffered from such pain for years, but the pain disappeared after just one session of chi flow. This is hard to believe but is true.

In my Shaolin Kungfu or Taijiquan classes, when a student is accidentally hit, which actually happens rarely, both his injury and pain are relieved after a few minutes of chi flow. But if the blockage is deep-rooted or old, relieving it may take some time.

I would like to share with you an interesting case which I had forgotten but which my senior disciple, Douglas, reminded me recently. It happened many years ago in Servilla, Spain. A young man came with his parents to consult me regarding his migraine which he had suffered for years.

I opened some of his energy points and gave him a chi flow. At one point I noticed that a lump of bad chi was blocked on top of the young man's head. I quietly went behind him and gave him a whack on his head with my Cosmos Palm. The young man was in shock for a few seconds, then turned around and started crying!

Douglas, who translated for me, was very concerned. He went over and asked the young man what was the matter. After listening to their son telling Douglas in Spanish, which I did not understand then, the parents started weeping..

Douglas later explained to me. The young man was shocked by my whack on his head. He was dazed for a moment. Then he realized that the pain which he had suffered for years had simply disappeared! He was amazed. He could not believe it but it was true, and he cried for joy. On hearing this, his parents who had taken their son all over the place to consult doctors and healers, also cried for joy.

I have done Qigong exercises I learned from books such as “Golden Bridge” and “Pushing Mountains”. I have felt effects such as fingers tingling and heat around my palm. But I do not feel any “good pain” to cure my injury. I hope you suggest some ways to help me overcome this problem.

You should have more respect for chi kung to think that you can easily learn it from books or e-mails to heal yourself. In the true-life story above, another person hitting the young man's head may cause him serious damage.

I have taken boxing for 7 months now and I think that I am making progress in it and want to continue to practise this sport not only for competition but also for fun. I want to pursue a career in boxing if I get the chance. As I am average academically, I am thus giving this option various thought.

I do not mean to discourage you in your intention to become a professional boxer, but I would ask you to consider your choice of career carefully. It will be easier if you do so in the following steps:

However, a few years later conditions may change and you may (or may not) have a different set of preferred professions. 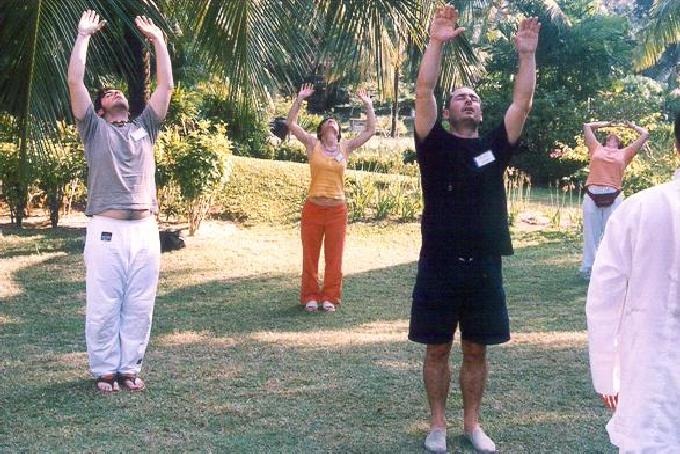 The above picture shows a chi kung session. A differentiating factor, which however may not be applicable always, is that the practitioners remain at the same spot.

But I have a very big problem which handicaps me in boxing or in whatever sports I do at school. My problem is that I wear spectacles for 3 years now and need to remove them while practicing sports. My eyesight is very poor and I hope you can help me to prevent my eyesight from deteriorating or to regain its previous state.

Many of my students have thrown away their spectacles after practicing chi kung. The Shaolin Eight Eye Exercises are excellent for improving eyesight. They are:

Please do a search on my Question-Answer Series to find detailed descriptions of these eight exercises.

I have been doing “Lifting the Sky” each morning and night, taken from your “The Art of Chi Kung”. About three days ago I added the two Sinew Metamorphosis exercises and have so far found them to be beneficial without negative side effects.

Seeking more information about the Sinew Metamorphosis exercises, I went on your site. On the site they are described as “advanced,” but from the book I got the impression that they are more basic.

Whether an exercise is elementary or advanced often depends on how it is performed rather than what the exercise is. In other words, it is skills rather than techniques that determine accomplishment levels.

This concept is difficult for most people to understand. Most people today grade whether an exercise is elementary or advanced according to techniques, and they measure their progress by the number of techniques they have learnt.

If we consider techniques as the one factor for comparison, presuming all other factors were equal, one may find “Lifting the Sky” and “Carrying the Moon” more advanced than the exercises in “Sinew Metamorphosis”. The main reason is that there are move movements in the more advanced techniques. This is probably what you mean. This is also the concept of most people who practice chi kung not as chi kung but as gentle physical exercises.

In other words, if you practice “Flicking Fingers” (which is one of the “Sinew Metamorphosis” exercises) and “Lifting the Sky” both as gentle physical exercises, you may consider “Lifting the Sky” more advanced because it requires more movements in performing the technique.

I also read on the site that “Lifting the Sky” and “Carrying the Moon” are OK to self-learn and are safe, but those are the only two listed. Are these the only two exercises in the book that should be done without a teacher, including Sinew Metamorphosis exercises?

Except when it is warned that a particular exercise should not be attempted without the supervision of a competent teacher, the exercises in my books are safe if one follows the instructions respectfully.

Following instructions respectfully does not mean that one must not make even a single mistake. If mistakes are made due to forgetfulness or carelessness, it is alright. But if one purposely go against the instructions, he is obviously asking for trouble for himself.

For example, if it is stipulated that he should open his mouth when breathing out, he closes his mouth once a while due to forgetfulness or carelessness, that is alright. But if he purposely closes his mouth, perhaps thinking that he would get better result this way, he would be in trouble.

The picture above shows a Taijiquan session where practitioners experience Tao

I am a forty five year old man and am interested in Kung fu. I live in the desert in California, USA. There are no teachers here. I have bought many of your books, but am unsure of what to study. Can I still practice Kung fu or is it too late? Am I too old? What should I do? I like your books very much and find them very enjoyable.

I am glad you have found my books beneficial and enjoyable. The best way to learn kungfu is to learn it from a competent teacher. But if you can't find one, you may learn from my books.

A good way is to start with “Lifting the Sky”, stance training and the Art of Flexibility. It is important that you should be relaxed when doing all the exercises, especially stance training.

You are not too old to practice genuine kungfu. My oldest kungfu student started learning kungfu from me when he was 87, and he lived to about a 100.

What is the difference between chi kung and tai chi?

Many people have asked me this question, and it can be answered at various levels.

By “Tai Chi” I reckon you mean “Tai Chi Chuan”, spelt as “Taijiquan” in Romanized Chinese. “Tai Chi” literally means “Grand-Ultimate”, and refers to the Cosmos.

While there are many types of chi kung, some very different in appearance from others, the general impression most people have of chi kung is performing some gentle forms repeatedly standing on a spot. On the other hands, Tai Chi forms are more varied and the performer moves about over a fairly large area.

The answer above applies to most chi kung and Tai Chi practitioners nowadays who practice their arts as gentle physical exercises.

When we look at these two genuine arts from the perspective of appearance, chi kung and Tai Chi Chuan are different. Chi kung forms are often performed on the same spot, whereas Tai Chi Chuan forms are performed over an extensive area.

From the philosophical perspective, Tai Chi Chuan is chi kung. Here, the term chi kung is used as a generic term for arts of energy. As energy management is an essential part of genuine Tai Chi Chuan, Tai Chi Chuan therefore is a form of chi kung.

To someone who does not know chi kung or Tai Chi Chuan, the explanation above may be confusing. Confusion arises because questions of their differences or similarities are treated as academic issues. To those who practice these two arts, these questions of differences or similarities become irrelevant, because the practitioners would know the answers from direct experience.

It is like asking what the difference is between money and gold. As academic issues, we may say money and gold are the same if we look at them as media of exchange. We may say they are different if we look at their normal appearance where money is seen as cash and gold as metal. We may also say they are different if we consider their normal functions, money used daily in business transaction, and gold used as expensive ornaments.

But when we are holding money in one hand and gold in the other, asking what their difference is, becomes irrelevant.