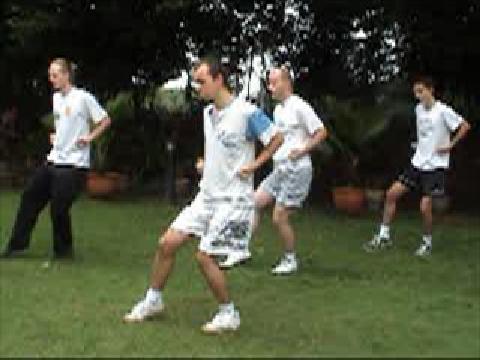 "Kung" or force is a very important aspect in genuine kungfu, without which kungfu would not be effective for combat, even if the practitioners know its combat application. Different schools have different ways to develop force. In our school, zhan zhuang is a very important force-training method. This picture shows participants at an Intensive Shaolin Kungfu Course practicing the False-Leg Stance.

Sifu I wanted to thank you for showing me the counters to the Praying Mantis and Wing Choon attacks during the UK summer camp which I have been practising on my friends.

It was a pleasure showing you those counters. I am sure you will find them useful when sparring with your friends.

As many of our Shaolin Wahnam students have practiced other styles of kungfu, I shall take this opportunity to let them know that if they wish to know the counters against any attacks which they have learnt in other styles, they can ask me or their instructors. They may be pleased to know that once they have understood the principles behind our 16 basic combat sequences, they will have the basic skills and techniques to counter any attacks.

As you would probably have discovered for yourself, the more important aspect in sparring is not the techniques but the skills. When your friends attack you with those Praying Mantis or Wing Choon techniques, for example, how well you counter them are not your knowledge of the counter techniques, but your ability to apply the techniques skillfully, especially in executing them in picture-perfect form, with reasonable force and in appropriate speed.

The same principle applies to chi kung or any other arts. Many people mistakenly think that if they know how to perform the technique of a particular chi kung exercise, they would get the benefits that exercise is purported to give. This is not true.

In fact, many people have waste a lot of time and obtain little or no benefit because they fail to understand this principle. For example, many students practice Abdominal Breathing. Their technique is correct but they lack the skills to perform it correctly. Thus they do not get benefit form Abdominal Breathing even though they may have practiced for years.

I wish to ask the difference between “kung lik” and “fa jing”. I have heard the term “kung lik” before but do not know what it means.

Word by word “gong-lik” literally means “art-strength”, or the art of using strength. The “strength” in “kung-lik” can be external or internal. Thus, the term means strength, internal force or ability.

There is a saying often applicable to many kungfu and most wushu practitioners today, as follows: “chee sai you yu, kong lik pat chook” (Cantonese pronunciation). First, let us have some fun with the literal meaning. Word by word the saying means “pattern-form-have-extra, art-strength-not-enough”.

Thus, the saying refers to practitioners who can perform the patterns and techniques beautifully but they have no force in their performance. In other words, theirs is “flowery fists embroidery kicks”, beautiful to watch but ineffective for combat.

Usually such practitioners only know external kungfu forms. But even if they know the combat application of these forms, they are inadequate in combat because they lack “kung-lik” or force. This is a main reason why if they ever spar with exponents of Karate, Taekwondo, Kick-Boxers, Western Boxers or other martial arts, they will be badly beaten.

This is the pathetic situation of kungfu today in terms of combat efficiency. Exponents of other martial arts may have less beautiful forms, or even crude forms, but they have a lot of “kung-lit”, whereas kungfu practitioners may have beautiful forms but little or no “kung-lik”.

“Fa jing” means “explode force”, i.e. channel out internal force, usually from the dan tian, to strike an opponent. It may also mean applying internal force to do something.

Hence, “kung-lik” is the ingredient, and “fa jing” is the process. Here the “kung-lik”, or force, has to be internal. If it is external strength, the process is usually not called “fa jing”, but called “fa li” or “cu li” (“fatt lik” or “chuit lik” in Cantonese).

Last week I was pleasantly surprised to find that Wahnam has been mentioned in another published book. Though our school has not been mentioned by name there is a reference to us.

I was reading a book called “Traditional Chinese Medicine for Women; Reflections of Moon on Water”. The author mentions that one of her patients in Canada was healed by visiting a Chi Kung course and told to “smile from the heart”. When someone asked how, the master said. “Don't ask how, just do it". Sifu, I can't tell you how happy I was to read this in someone else's book.

I am glad that our art is being noticed by other masters too.

Indeed, “Don't ask how, just do it" is very good advice. It is very useful advice to those who say they cannot relax. Don't ask how to relax, just relax — in the same way as don't ask how to walk, just walk. 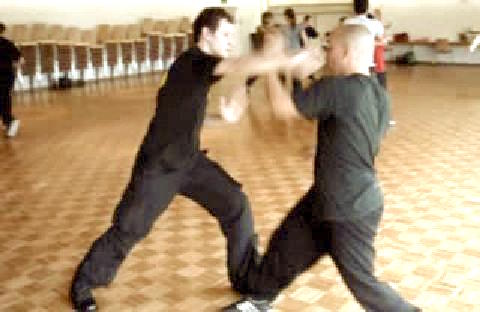 I have been practising Wong Kiew Kit's qigong and enjoy this style. I have also been teaching a group of disabled (some wheelchair bound) adults for some time now, and incorporate where I can some of Wong Kiew Kit's techniques. I find it is time to obtain more formal hands-on training for myself. Please can you advise if you offer qigong instructor training?

Although you may get some good results learning from my books, you will find learning from me personally is vastly different. I would recommend that you attend my Intensive Chi Kung Course. Alternatively, you can learn from one of our Certified Instructors.

These courses or classes, however, are not meant to train instructors. We do not offer instructor-training courses to people who have not trained with us previously. Prospective instructors are selected from our students who have proven to be dedicated and of high moral values, and they undergo special training to be instructors.

Having looked at your excellent webpages and searched your Questions & Answers, I was very interested in the 18 Shaolin Chi Kung. What is the difference between "Yellow Bird Drinks Water" and "Cross Hands Thrust Kick"?

How is Wing Choon taught in your programme?

We do not teach Wing Choon Kungfu formally in Shaolin Wahnam, though Wing Choon principles and techniques are found in our teaching. This comes about in two ways.

For example, in the recent Intensive Shaolin Kungfu Course in October 2006, Roeland asked me to explain and teach an effective counter against the famous Wing Choon chain-punches. I explained that the Wing Choon chain-punches were probably derived from the "lian wan pao" or "Continuous Cannon Punches" of Shaolin Kungfu, and they as well as their counters are found in our Basic Combat Sequences 5 to 8, and further developed in Sequences 9 to 12 with kicks.

Actually there are many counters in Wing Choon Kungfu against qin-na, or holds and grips, though I suspect many Wing Choon practitioners today may not realize it. So I demonstrated a few Wing Choon techniques against qin-na, and reminded the students to use them when appropriate in their Shaolin Kungfu.

For example, if an opponent grips your wrist, you could use Wing Choon "huin sau" or "circular hand" to release the grip, followed by "than sau" or "reverse palm thrust"

Sifu Wong demonstrating an application from Fa Khun or Flower Set, which is an important set in Choe Family Wing Choon. Wide stances are used in Fa Khun, like in other Southern Shaolin styles.

Does your Wing Choon have chi kung?

Yes, chi kung is found in Choe Family Wing Choon, but it is taught only to inner-chamber disciples. Other students, even at fairly advanced levels, mainly use mechanical strength.

Teaching chi kung and internal force only when students had become inner-chamber disciples, or at best when they had reached advanced levels, was the norm in the past. This is also the norm today, except that today many masters themselves may not have internal force. This is a main reason why many people do not believe in internal force because exposure to internal force is so rare today.

In Shaolin Wahnam our philosophy and methodology are different. Every kungfu movement even for beginners, whether in Shaolin Kungfu or Wahnam Taijiquan, is chi kung and meditation. When a Shaolin Wahnam practitioner makes a movement, he does not tense his muscles or mind; he does so in a relaxed manner with mental freshness and focus. So, if he incorporates a Wing Choon technique when the occasion requires it, he does so as chi kung.

Is Fa Kuen the same as Wing Choon?

In many schools of Wing Choon today, "Fa Kuen" or "Flower Set" is not a part of their training programme. The three standard sets in many Wing Choon schools are "Siu Lim Tau" or "Little Intention", "Cham Kiew" or "Sinking Bridge" and "Phiew Chee" or "Thrusting Fingers".

I believe that "Fa Kuen" as well as other sets practiced in Choe Family Wing Choon, like "Chin Cheong" or "Battle Palm" and "Shui Ta" or "Essense of Fighting", were initially practiced by the founder, Yim Wing Choon, who learned them from her sifu, the Venerable Ng Mui, a famous Shaolin nun. Yim Wing Choon selected patterns from her various sets that were of particular uses for her needs, and composed these patterns into a set for convenience of practice.

Like many systematic practitioners, she practiced this set at the start of her training session. When asked the name of this set, she might have called it "Siu Lin Tau", which means "Little Beginning", suggesting that this was a little (meaning short) set she would practice at the beginning of every training session. Over time, “lin” could be mis-pronounced as “lim”. This was probably how this fundamental Wing Choon set developed.

Why is it that in Choe Family Wing Choon, the Goat Stance is mainly used in “Siu Lin Tau”, whereas other stances like Horse-Riding, Bow-Arrow and False-Leg are used in “Fa Kuen” and the other sets? The following background information may suggest an answer. In Shaolin Kungfu where internal force training is involved, the Horse-Riding Stance is usually used. Where combat application is involved, the Bow-Arrow Stance and the False-Leg Stance are generally used.

Yim Wing Choon practiced “Siu Lin Tau” for force training, and the other sets for combat. But as she wore skirts, using the Horse-Riding Stance would not be suitable. Hence she used the narrower Goat Stance instead. For the other sets which she practiced for combat application, she retained the Bow-Arrow Stance and the False-Leg Stance.