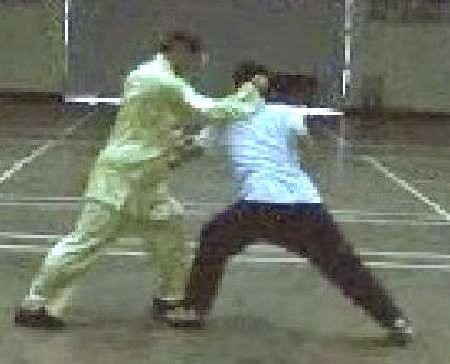 Sifu Wong applies the diagonal punch technique in the pattern ”Chop the Hua Mountain" to strike the opponent's head, which may be fatal, or fracture his shoulder blade, which is more compassionate..

I greatly enjoyed your book, “The Art of Shaolin Kung Fu”. While I notice you have carefully depicted a part of the movement for each of these strikes in pages 58-59 of your book, I would very much like to see how each of the techniques below are performed as solo basics, as well as in basic application against an opponent. Would it be possible to ask if these could be shown in video format in your questions and answers section of your website?

I have prepared a webpage to show the movements of the different punches as well as their basic combat applications. Please log into Various Ways of Striking with the Fist in Shaolin Kungfu.

Even in just the category of strikes, there are more varieties and techniques in striking in Shaolin Kungfu than in any other martial arts. The twelve different ways of striking using the fist is just one of many ways. Besides the fist, Shaolin Kungfu also employs the tiger-claw, the dragon hand-form, the palm, the crane beak, the leopard punch, the phoenix-eye punch and other hand forms.

It has become a common practice amongst kungfu practitioners, including some masters, to say that kungfu becomes quite ineffective when practitioners put on gloves. This is an excuse for their inability to use kungfu for sparring or fighting. The sad fact is that most kungfu practitioners today cannot use their kungfu for combat, though some of them may be formidable fighters using borrowed techniques from other martial arts.

While it is true that many kungfu techniques would be adversely affected if practitioners put on gloves, there are still more than enough kungfu techniques for combat with gloves on. In fact, even when wearing gloves, a kungfu exponent has a wider range of techniques than combatants of most other martial styles. These twelve types of punches are some examples. The video clips in Various Ways of Striking with the Fist in Shaolin Kungfu shows how they can be effectively used in combat even when practitioners wear gloves.

I personally enjoy physical training a lot. I don't do weights, but I train using body weight (e.g. climbing, pushups), and try to keep an all round muscular body. My question is: “Will inner energy still give you the benefits of physical strength?”

Yes, inner energy or internal force will give benefits of physical strength as well as enable the practitioner to do physical tasks better. Muscular strength derived from physical exercise is limited by many factors, but internal force is not.

For example, using muscular strength, a woman or an eldery person is normally weaker than a man or a young person, but this is not so when using internal force. Muscular strength only enables you to do physical work, but it does not make your organs stronger or your mind clearer, but internal force can do these things.

I see many martial arts masters who merge into training only their styles, disregarding physical exercise. I ask myself what if something happens and they need to run, climb a high wall or tree?

Actually most practitioners of martial arts, students as well as masters, employ muscular strength; they do not have internal force. When they practice their styles, they are practicing physical exercise. Hence, besides being able to fight, they can also run, climb a high wall or tree, and do other physical acts very well.

Even amongst those who say they practice internal arts, like Taijiquan and Baguazhang, most of them also perform their arts at a physical level, without internal force. They too can perform physical tasks, like running and climbing, well if their training is vigorous enough. But if they practice their arts like some form of ballet, as many of them do, they would be physically weaker than those who perform physical exercise like jogging and weight-lifting.

However, those martial artists who develop internal force, and they are an elite minority today, can generally perform physical tasks like running and climbing more efficiently than those who train physical exercise.

For example, practitioners of physical exercise would become tensed or out of breath after about ten minutes, but the internal art practitioners can still be relaxed and full of energy after an hour. This is not an exaggeration. All participants to my Intensive Shaolin Kungfu Course and Intensive Taijiquan Course can spar continuously for more than an hour without feeling tired or out of breath. And sparring is noth physically and mentally more demanding than running or climbing. 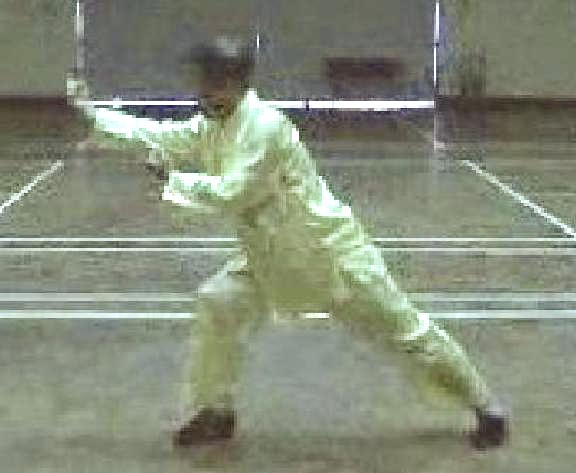 I do early morning jogging, but I feel my knee joints are weaker than when I used to do indoor military cardio. Is there any particular Chi-Kung exercise to help reinforce the knees, and should I quit the running and concentrate on different forms of cardio?

From the chi kung perspective, both jogging and indoor military cardo are detrimental to health. The main reason is that these demanding physical exercises put undue stress on your internal organs and systems before your organs and systems have been sufficiently trained to undertake the stress. Moreover, the exercises expend energy.

Chi kung philosophy is different. In chi kung, you strengthen your organs and systems, not over stressing them. Then you need not do jogging or indoor military cardo. But if you like to do them, you can do them better because your organs and systems are healthier and stronger. Moreover, in chi kung you end up with more energy after your practice than before.

“Deep Knee Bend” and “Rotating Knees” are excellent exercises for the knees. However, without learning from a competent instructor, it is likely you will perform them as physical exercise rather than as chi kung. The crucial difference between physical exercise and chi kung lies not in the form of the exercises, but in how they are being practiced.

Is it possible to train both hard and soft styles and become very proficient at them.

But all other things are not equal. As an hypothetical example, if his Choy-Li-Fat6 is of a low level although he may be proficient in it, then his proficiency in Taijiquan will enhance his Choy-Li-Fatt, or vice versa. For example, the relaxation and chi flow he derived from his high-level Taijiquan will off-set the muscular tension and energy blockage that he may sustain in low-level Choy-Li-Fatt. Alternatively, the combat efficiency of his high-level Choy-Li-Fatt will off-set the dance-like movements of his low-level Taijiquan.

From another perspective, great kungfu is both hard and soft. For example, although Choy-Li-Fatt is considered a hard style, a high-level Choy-Li-Fatt master can be very soft too. Similarly, although Taijiquan is considered a soft style, a high-level Taijiquan master can also be very hard. Indeed, any kungfu style that is only hard or only soft, is incomplete.

I know from reading your posts that you have said hard styles consolidate the force and soft jins making it flow explosively. I am very interested in using softness to overcome hardness but I am wondering if both can be trained or do they contradict each other.

Saying that hard styles consolidate the force and soft jins making it flow explosively, is a good example illustrating the limitation of words. It also illustrates the difference between direct experience and intellectual speculation.

The statement can be either right or wrong, both right and wrong, or neither right nor wrong.

Take an example of a Choy-Li-Fatt master performing stance training or a “throwing punch”, or a Taijiquan master performing “Single Whip” or Abdominal Breathing. This example shows that the statement can be right or wrong, or both right and wrong. A Choy-Li-Fatt master can employ either stance training or a “throwing punch” just to consolidate force, or just to let force flow, or both at the same time. Similarly, a Taijiquan master can do so too. To the masters, the techniques are means. They can use the same technique to achieve different purposes.

Needless to say, they are masters of high-level Choy-Li-Fatt and Taijiquan. A master of low level Choy-Li-Fatt or Taijiquan may not be able to do any of these things. In case you may be puzzled that if he is a master how it is possible he practice a low level art, be assured that it is not only possible but actually quite common not just in kungfu but also in many other disciplines, though many people may not be aware of it.

And for these low-level masters as well as most other students who have no experience of internal force, the statement that hard styles consolidate force and soft style make it flow is neither right nor wrong. To them the statement is simply irrelevant.

Because of their theoretical knowledge, low-level masters may talk about these topics and give sophisticated explanations using classical terms, which most ordinary people will find impressive although the initiated can often tell that their explanations reveal their lack of practical experience. For example, a low-level master may explain with high-flown terms that since hard styles consolidate force, if a hard style practitioner wants to make it flow, he must cross-train a soft style. This appears logical but is untrue.

An initiated practitioner will know from his direct experience that while a hard style consolidates force, it can also make it flow. Actually this is only logical. If a style can only consolidate force but cannot make it flow, there will be trouble. The consolidated force, but being unable to flow, can cause serious health problems. 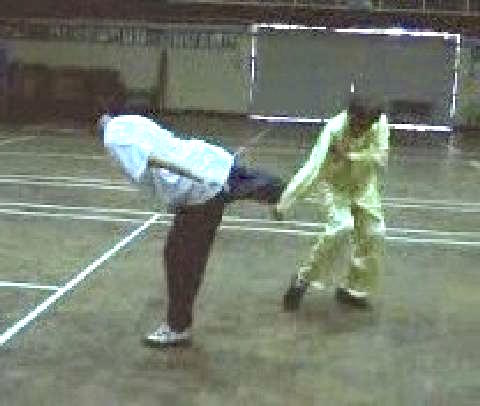 Sifu Wong uses the “whip punch” in the pattern “Save Emperor with Single Whip” to counter Sifu Chow's kick. Notice that Sifu Wong's “whip” is not a block but a strike.

I am also interested in going to Wudangshan for a couple of years to practice the alchemy and wudang gong fu taught there. Did you hear of the school on this website and can you tell me what you think of it. I would be very grateful to hear a modern master's perspective.

I am sorry. It is not our policy to validate another school. You will have to access the school yourself, and the information you get from this website as well as our Shaolin Wahnam Discussion Forum will be helpful in your accessment.

I have been practicing shikantaza for a while now and have received many great benefits. I have even managed to open my microcosmic circulation through shikantaza. Is longevity possible through Zen/Chan training alone.

I do not know what shikantaza is, but if you have received many great benefits from it, you should carry on practicing it. It would be silly to give it up.

Opening the microcosmic circulation (whereby vital energy flows through the Ren Meridain and the Du Meridian) is a great achievement. Congratulations. It will give you good health, vitality and longevity.

Yes, longevity is one of the many benefits of practicing (but not merely studying) Zen or Chan. Zen monks generally live long lives.