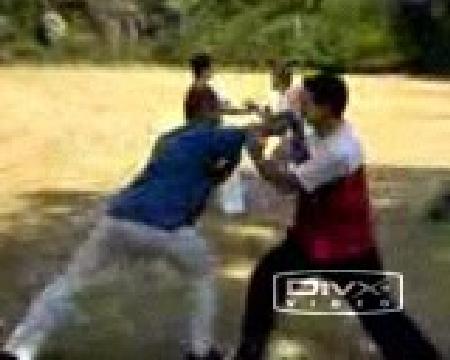 Combat Application is an important aspect of genuine, traditional Taijiquan. This picture shows Sifu Inaki and Sifu Manuel, both of Shaolin Wahnam Spain, practicing sparring during a Taijiquan course

I have been informed that if one studies chi kung, specifically Shaolin chi kung, then one is not allowed to perform any physical exercise, such as swimming, stretching, jogging, and lifting weights. Is this true?

This is categorically not true. In fact the reverse is true.

If you practice chi kung, especially high level chi kung like Shaolin Cosmos Chi Kung, you will have better results no matter what you do, including swimming, stretching, jogging and lifting weights. This is because high level chi kung enables you to have more energy and better mental clarity.

Could you explain the difference between Abdominal Breathing and Dan Tian Breathing?

In some schools, Dan Tian Breathing is another name for Abdominal Breathing, but in our school they are different.

In Dan Tian Breathing the practitioner may not breathe in and out via the nose or mouth. Cosmic energy comes into him focusing at his abdominal dan tian, and his vital energy goes out of his body radiating from his dan tian. He literally pulsates with the Cosmos. Dan Tian Breathing often transports the practitioner into the transcendental dimension. He sometimes realizes that he is not physically breathing, and that he does not have a physical body. Hence, in our school it is also called Cosmic Breathing.

I have heard of and read a few articles on Cosmos Palm. I am curious as to how long it will take for one to master and be able to effectively apply Cosmos Palm. Who could teach Cosmos Palm?

The time taken will depend on numerous variables, like the skill of the teacher, the ability of the student, and the standard aimed at. It may range from a year to thrity years.

Obviously a master who himself has Cosmos Palm and is willing to teach it, could teach Cosmos Palm. Someone who merely know Cosmos Palm from reading but has no practical experience of it, could not teach it even though he wanted to.

Traditionally in advanced arts like Cosmos Palm, it is the master who chooses to teach his students. It is unlikely the case of a student telling a master, “Here is a lot of money. Please take it and teach me Cosmos Palm.” 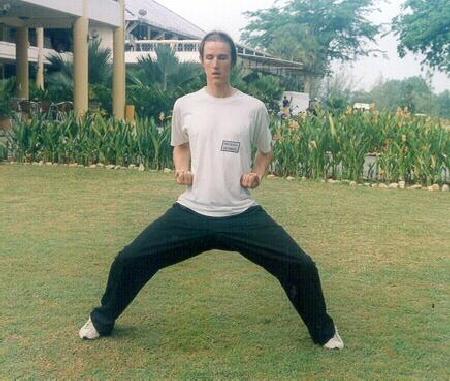 I have a desire to learn internal martial arts, especially Taiji. I am, however, finding it very difficult to find an instructor in Hong Kong who can or will teach me the martial applications of the systems.

I was wondering if you could possibly offer me some advice about starting in the internal arts.

You need to understand what an internal art is. As you intend to train full time in China, it is most probable that you do not really know this.

Desiring to practice an internal martial art, many people turn to Taijiquan. The big irony is that there is nothing internal or martial in more than 75% of the Taijiquan taught in the world today! If we consider China alone, the percentage would be more than 90!

Most practitioners today outside China “play” Taijiquan as a recreation and socialization exercise. The majority of the practitioners are elderly people. Most practitioners inside China today are younger, and the training is generally tougher. However, they do not practice it as an internal martial art, but as an external demonstrative sport.

Most Taijiquan practitioners today inside and outside China, including instructors, do not know how to defend against a simple punch or a simple kick. They would be quite helpless when an attacker locks their arm or throw them over the shoulder.

This does not necessarily mean that practicing Taijiquan as a recreation exercise or a demonstrative sport is not useful, provided you take care not to injure your knees. You may be surprised to know that a great majority of Taijiquan practitioners today both inside and outside China have developed knee injuries from their training. This fact alone indicates they do not practice Taijiquan as an internal martial art.

I have found a Hung Gar practitioner who will train me. I am concerned though as I am likely to cross to Taiji next year, when I hope to train in China full time, that this may inhibit my Taiji development, especially as I have very little Kung Fu experience.

But if either of you is extra-ordinary, like you can grasp the general principles of kungfu from your Hoong Ka training, or your instructor can transmit this understanding to you, your Taijiquan training in future will be enhanced. For example, if you can appreciate and benefit from the stance training in Hoong Ka, this will give you a head start when you learn Taijiquan in future. 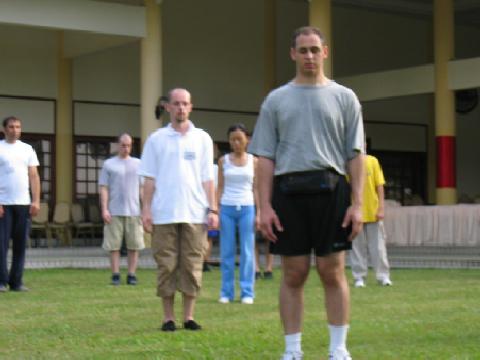 Participants at an Intensive Shaolin Kungfu Course practising Standing Meditation known as Entering Zen. If it were a Taijiquan course, this can be called Entering Tao.

Can I practice at the same time Taijiquan not as martial art but as an art of developing vital energy, and rigid kung like Iron Leg or Rolling Bamboo on the table?

Yes, practicing Taijiquan to develop vital energy, even without its martial aspect, will help in your training of Iron Leg or Rolling Bamboo.

Can I practice forms without practicing stances before because it is very boring?

You can, and in fact many kungfu students are doing this. It is not harmful and can be beneficial in many ways, enabling you to be flexible, graceful and balanced.

But you will certainly get much more benefit if you practice the stances first. If you take your stance training not as an endurance test but as a relaxation exercise, you may even find it joyful.

Can a person meditate on the Dao and Zen at the same time?

Yes. Tao (Dao) and Zen are different names for the same thing, although there may be different connotations.

But generally he will get more benefits by focusing on either one. This is because Taoist mediation and Zen meditation follow different philosophies and use different methods. A Taoist cultivator aspires to become an immortal to roam the heavens, whereas a Zen cultivator aspires to attain Enlightenment when heavens do not exist. Taoist meditation makes great use of visualization, whereas Zen mediation aims at non-thought.

But even for ordinary people not ready for or nor interested in these very advanced attainments, the different approaches between Taoist and Zen meditation may hamper or slow down their progress in acquiring mental freshness and inner peace.