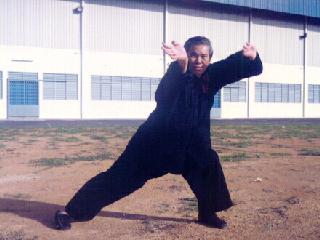 What does it means that our phenomenal world is an illusion, the cause of suffering is carving, the teaching came about not from some philosophical reasoning but from the direct experience of the Buddha seeing the illusory nature of the phenomenal world in his deep meditation, and from the experience of people who suffered due to failure to satisfy their desires!?

Our phenomenal world is an illusion because different beings see the “same” world differently. What is a table to you may be a whole universe to a bacterium found in it. A fairy who exists at the same place and time but in a different dimension may not see the table at all and floats past it. If the world were objectively or absolutely real, all beings would experience it the same way.

When the Buddha taught that the phenomenal world is illusory, he did so from direct experience. In his deep meditation when he attained a very high level of consciousness that transcended time and space, he experienced the illusory nature of the world we live in. This teaching is universal. Any being who attains a very high level of consciousness will experience the same illusory nature of the world. This teaching is based on direct experience and not on reasoning or intellectualization.

In contrast, when Plato taught that the perfect form was a circle, he did so from reasoning or intellectualization. He might have some personal experiences where he found the circle the perfect shape, but this was not universal. At other times and other people might find other shapes more favorable than the circle for various particular purposes. A farmer planting crops or a builder building houses might find the square or rectangle more suitable.

The Buddha's teaching on carving as the cause of suffering is confirmed by ordinary people in their ordinary lives. When people carve for something but fail to get it, they suffer. Suppose the train that goes from your town to another town is delayed. If you have nothing to do with the train, the delay does not matter to you. But if you need to take the train to arrive for an important appointment on time, the delay causes you suffering because it fails to satisfy your desire to be on time for your appointment.

At a higher level, if you have sympathy for those who suffer as a result of the delay, you also suffer because it fails to satisfy your desire for other people to be happy. Please note this does not mean that you should not be sympathetic or to be sympathetic would lead to suffering. These are different issues. The issue here is that failure to satisfy craving — for selfish or unselfish desires — leads to suffering.

What really is this phenomenal world? I mean if I see an apple that apple is a material thing, right? So how can that be an illusion? I wonder because I believe that all in the universe are some kind of material, and I believe, that even my spirit is material. In fact the most refined material that exists can be a Buddha or God!

This phenomenal world we live in — just as all other phenomenal worlds, including heavens and hells — is a creation of mind. Interestingly, the latest and most hard-core of science is saying the same thing, except that quantum physics refers to the infinitesimally small dimension, whereas the Buddha's teaching applies to all dimensions.

The Buddha explains such a phenomenon as follows. What we experience is conditioned by our “six entries”. The energy that we conceptualize as an apple enters us in six ways, namely through our eyes, ears, nose, tongue, body and mind. If these “six entries” are altered slightly, the image (which is actually an illusion) you form from the energy will be changed slightly. If the “six entries” are altered a lot, the change will be a lot. For example, if the lens of your eyes were different from what you have now, you would not see an apple as an apple.

To say that it is an illusion does not mean that it is not there but we imagine it is there. It means it does not have absolute reality. Its appearance or illusion is relative to our set of conditions. Scientifically speaking an apple is a mass of energy. Due to the nature of our “six entries” this mass of energy appears to us as an apple. We can also feel and taste it as an apple, but if one or more of our “six entries” are changed even slightly, such as if we are intoxicated, this mass of energy we normally perceive as an apple may not look, feel or taste like an apple.

It is now scientifically accepted that everything in the universe is energy, which means none is any kind of material, although ordinary people due to the limitations of their senses may see it as material. 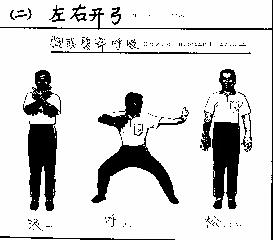 This chi kung pattern from “Eighteen Lohan Hands” called “Shooting Arrow”, demonstrated by Sifu Wong in an old chi kung manual, clearly shows it as the forerunner of the kungfu pattern “One Finger Stabilizes the Empire”.

The word “phenomenon” comes from a Greek word meaning “illusion”. The “phenomenal world” means the “illusory world”. It is phenomenal or illusory because it does not have absolute or objective reality. If it had absolute or objective reality, it would appear the same to all beings — regardless of whether they are bees, elephants, ghosts, humans or gods. Because it is phenomenal or illusory, it appears differently to different beings. These different beings see the world as different phenomena or illusions.

An internet webpage says that Bodhidharma invented the wonderful arts, “The Muscle Tendon Change” and the “Eighteen Lohan Hand Movements” from Kalarippayattu, a ancient martial art form believed by many historians as probably the oldest still-practiced martial art form in the world. Ancient references suggest that Bodhidharma took this art form to China and imparted it to its monks. This martial art is also believed to have evolved into Kung Fu and other forms of present-day Chinese martial arts. Is this true?

The great Bodhidharma went from India to China to teach Zen (Chan) or meditation to the Shaolin monks in the year 527. As he found the monks weak he taught them two sets of exercises, “Sinew Metamorphosis” (also called “Tendon Changing Classic” by some masters) and “Eighteen Lohan Hands” to strengthen them physically, emotionally, mentally and spiritually so that they can better achieve their spiritual goals in Zen.

I do not know whether these two sets of exercises were invented by Bodhidharma or they were taken from some classical Indian arts, such as the martial art of Kalarippayattu. But as “Sinew Metamorphosis” and “Eighteen Lohan Hands” were practiced in the Shaolin Monastery as “chi kung” and not as “kungfu”, I believe these two sets of exercises were taken from yoga, and not from an Indian martial art.

Bodhidharma did not teach any martial art in the Shaolin Monastery. It was later that “Eighteen Lohan Hands” taught by Bodhidharma as chi kung, evolved into “Eighteen Lohan Fist”, which was the prototype Shaolin kungfu set, from which other types of kungfu sets as well as other kungfu styles developed. This evolution of “Eighteen Lohan Hands” into Shaolin Kungfu was engendered by generals who retired to the Shaolin Monastery for spiritual cultivation. On the other hand, Sinew Metamorphosis evolved to become the core of Shaolin Chi Kung. 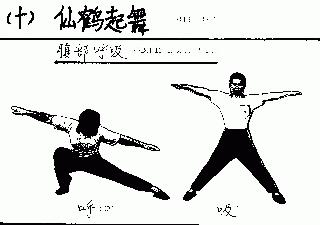 "Dancing Crane", demonstrated here by Sifu Wong in an old chi kung manual, is one of the Eighteen Lohan Hands. It may not be easy to see that a kungfu pattern called “Tame Tiger with Beads” was evolved from it.

Is it true that our luminous energy field has existed since the beginning of time, it was one unmanifested light or creation, and will endure throughout infinity, and that the Chinese people didn't know that chi is also going out from the body to all the universe?

Yes, it is true that our luminous energy field is eternal and infinite. In other words it has existed since the beginning of time, has been an undifferentiated light or creation, and will last through out infinity.

When we practice chi kung do we cleanse our chakras like the American shamans do with water using their fingers to cleanse the chakras?

I do not know what American shamans do with their fingers and chakras, but we do not do that in chi kung. 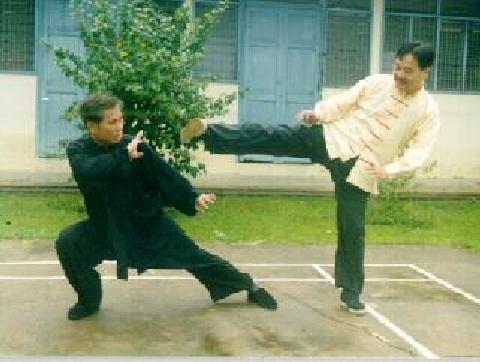 Sifu Wong uses the kungfu pattern “Tame Tiger with Beads” to neutralize Goh Kok Hin's side kick. Could you detect that this kungfu pattern was evolved from a chi kung pattern, “Dancing Crane”, of the “Eighteen Lohan Hands”?

I have been taught a little of how to use chi by my Kenpo instructor and I also practice transcendental meditation. Sometimes when I begin to reach a higher level of consciousness I get a mild headache.

Since a young age I have had some minor problems with depression, anxiety, and concentration. Upon reading the question and answer involving how chi can break up a blockage, and pain is experienced, I thought this could be the case.

It is unlikely that you have generated sufficient chi flow from your meditation to clear blockage. It is more likely that during meditation you had irrelevant thoughts, and this could cause a headache. As you have not practiced chi kung before, it would be easier for you to relieve your headache with some aspirins.

I am an inventor, and am considered to be a genius by some of my family, friends, and teachers. Yet I often perform poorly in school because of a lack of concentration, or simply because of my apparent inability to process information quickly. I have shown I am capable of much more than I normally display (I don't mean to sound arrogant). So the question is, could my chi be pushing through and cleaning blockages in my brain creating a headache, or is there another reason?

Being able to concentrate and to process information quickly are some of the common characteristics of a genius. If you do not have these qualities, your family, friends and teachers may have used the term “genius” in some unorthodox ways.

All of us, genius and otherwise, use only a small portion of our potential. If an ordinary person can use more of his potential, he will be better of than a genius who under-uses his.

As mentioned above, I do not think it was chi pushing through your blockage. I would rather think you had caused some blockage during your meditation. This could be caused by your being tensed or having irrelevant thoughts while meditating.