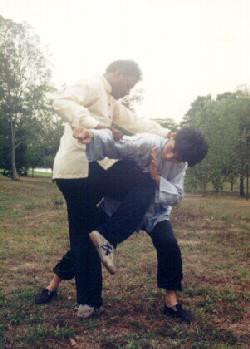 Yes, we at Shaolin Wahnam teach grappling and throwing techniques. Many of them are similar, but not exactly the same, as those in Jujitsu. Generally speaking, Jujitsu grappling and throwing techniques are more sophisticated, but those of Shaolin are more profound. For example, a Jujitsu exponent does not merely grip an opponent, but follows up the initial grip with an elaborated lock, from which the opponent finds hard to escape.

By gripping the opponent in a certain way with appropriate force, a Shaolin exponent can disable the fighting ability of his opponent without requiring a follow-up technique and also without seriously hurting him. This is known as qin-na, which as far as I know is not found in non-Chinese martial arts.

Of course, Shaolin Kungfu has many techniques to escape from being pinned to the ground, otherwise it would not be a complete art. Regarding ground fighting, there are many differences between the Shaolin perspective and the perspectives of other martial arts like Wrestling and Brazilian Jujitsu.

The fundamental cause of the differences is that Shaolin Kungfu is meant for real fighting (sometimes involving life-death consequences) whereas the other arts are meant for sports. There have been many interesting discussions in our Shaolin Wahnam Discussion Forum recently, and much of the argument arises because many people fail to appreciate this crucial point.

From the Shaolin perspective, being pinned to the ground seldom or never happens in a real fight. This is not underrating the opponent; in fact it is the reverse. A basic combat principle in Shaolin Kungfu is that we always presume our opponent is wise and capable. While charging in for a takedown is typical in a Wrestling or Brazilian Jujitsu match where the charger is protected by safety rules, doing so in real fighting, from the Shaolin perspective, is extremely unwise as the charger exposes himself to fatal attacks.

A simple, effective counter is to retreat the front leg into a Bow-Arrow Stance, and simultaneously drive a hard fist onto the opponent's head or spine, killing or maiming him with one strike. Anyone who thinks that one strike cannot kill or maim, simply has no idea how devastating a genuine kungfu strike in a life-death combat can be. He also commits the mistake of underrating his opponent.

Secondly, I was wondering if you had any suggestions on how to overcome chronic insomnia since this has been a problem plaguing me personally for quite some time.

You will be glad to know that overcoming insomnia is actually easy if you practice genuine chi kung. From the chi kung perspective, the cause of insomnia is an inability to relax, especially mentally. The first requirement in chi kung is to relax, both physically and mentally. In other words when you practice genuine chi kung, which means when you can relax, you insomnia will disappear as a matter of course.

The best action for you is to attend my Intensive Chi Kung Course in Malaysia. Basing on my track records, you will have more than 90% chance of recovery within three months! Some people overcame their insomnia during the course itself.

If this is not feasible, you should attend one of my regional classes. A third choice is to practice “Lifting the Sky” or “Carrying the Moon” from my books.

I have been practicing chi kung from your books, “Chi Kung for Health and Vitality” and ”The Art of Chi Kung". It seemed very beneficial since I did feel good while doing the chi kung and did feel like I got more stamina for running.

But lately I had to stop and concentrate on my studies. That was when it begain. I started to feel a strange sensation on the top of my head. It felt like pressure building up just a little forward of the baihui point.

It spread almost all over the top of my head except for the back of the head. Now it is like a pain instead of pressure. At the same time my hand started to feel realy hot. It was hot.

I didn't think it would mean much since I just didn't practice chi kung so all I had to do was to start again. However it was not that easy. Now I feel almost no chi flow. I am worried since this morning my hand started to shake when picked up some paper. Could you please help me to remedy this problem?

It is difficult to judge your situation from your description alone. A good guideline is how you feel. Generally if you feel well, you are progressing well. If you feel bad, you have practiced wrongly.

But it looks like you are doing well. The pressure on your head was due to accumulation of chi. Although you had stopped practicing then, chi still builded up from your previous practice. The slight pain was due to the chi breaking through some blockage you had sustained.

The heat on your hands was an indication of chi build up too. The shaking was due to chi breaking through energy blockage in the tissues of your arms.

Carry on with your practice, and enjoy it. 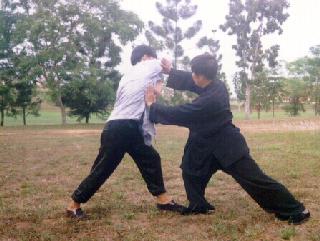 Thank you for your helpful and enriching website. I have truly progressed a lot in Taichi, after reading your notes. My skills and health have improved by 10 folds! Its amazing! I could never be able to concentrate chi, but after trying the Horse-Riding Stance for a month I started to feel the healing effects.

I am glad you have found my website useful and beneficial. The internet is a fantastic modern invention, enabling information to be shared in a scale and at a speed simply unthinkable even 20 years ago. But there is also a lot of rubbish and wrong information on the internet. You need to be discriminating when surfing the internet for information.

Stance training is one of the most effective ways to develop internal force. Among many other things, internal force generates healing effects, makes you healthy and fresh, deepens your skills, increases your chi power, and improves your daily work and play.

The Horse-Riding Stance is the most demanding of the various stances, and the internal force developed is tremendous. Another very important stance is the Three-Circle Stance, which is popularly used in Taijiquan (Tai Chi Chuan).

I'm a Christian and I'd like to know if it is possible to practice Tai Chi (or any martial arts) without being involved in the religious parts of the art?

The correct term is “Taijiquan” in Romanized Chinese, or “Tai Chi Chuan” in English spelling. Taiji, or Tai Chi, means the Cosmos, and is symbolized by two fish-like designs, white and black in colour, harmoniously joined together. But most people in the West, and some people in the East, use the term “Taiji” for Taijiquan.

Taijiquan and all other martial arts are non-religious. This means anyone can practice Taijiquan without being involved in any religious matters, because there are actually no religious parts in Taijiquan. Hence, as a Christian you can practice and benefit from Taijiquan.

Nevertheless, Taijiquan when practiced correctly is spiritual. Being spiritual is different from being religious. “Spiritual” means pertaining to the spirit or soul. In Chinese philosophy, every person is composed of three components — body, energy, and spirit. Hence when we practice genuine Taijiquan, we cultivate not just the body but also our energy and spirit. If a person is depressed, for example, it is because his spirit is low. By practicing genuine Taijiquan, he can uplift his spirit and overcome depression.

What is Huo Chuan (Loose Boxing in English)? Apparently it was a style of Tai Chi that was developed by Yang Lu Shan. It mainly uses Fa Jing. I read that it consists mainly of strikes to the neck. It also combines Dim Mak (pressure points)

I have not heard of “Huo Chuan” and I don't think it means “Loosing Boxing” in English. It probably means “Harmony Kungfu”. 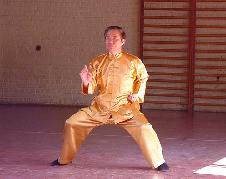 Sifu Wong demonstrating “One Finger Shooting Zen”, which is a fundamental chi kung exercise to develop internal force for “Dim Mark” or the art of “Doting Vital Points”.

How safe is Dim Mak?

“Dim Mark” ("dim mak") is a specialized kungfu art where the exponent strikes the opponents' vital points. Such strikes are usually made with one finger, usually the One Finger Zen hand-form, or with the phoenix-eye fist. Sometimes the strikes are made with two fingers, in the dragon hand-form or the sword-finger form.

“Dim Mark” is a Cantonese term. The term in Mandarin is “Dian Xue”. In English it is often described as the “Death Touch”. Although this suggests the devastating effect of a seemingly harmless finger strike, the description is not accurate. Actually, like the Tiger Claw, "Dim Mark" is an art of compassion, disabling opponents without causing them irreversible harm.

If you drive a fist into your opponent's head or strike a palm into his heart, the damage may be irreversible. But if you disable his fighting ability by stopping his energy flow with "Dim Mark" or Tiger Claw, he may return home to seek a Chinese physician or a chi kung master to restore the energy flow for him. It is no surprise, therefore, that while "Dim Mark" and Tiger Claw are found in many kungfu styles, they are most famous in Shaolin.

Both in learning "Dim Mark" as well as in applying it in combat, "Dim Mark" is safe in the hands of a master. But if learnt from incompetent sources, or use it unskillfully, it can cause serious insidious harm.

I'm going to be a Police Constable. I'm looking for an art that will enable me to use striking, locks and throws to seize and control a criminal. One thing to keep in mind is I'm 5'11, 165 pounds and to subdue or to defend myself from a 6'3, 200 pound person punching and kicking like a mad man will be difficult. The art that I found was Chin Na. I would be so grateful if you could mention other arts that are as equal or better for my situation, Sifu.

Genuine, traditional Shaolin Kungfu is ideal for you. The following are some of the reasons.

When you are promoted as a high-ranking officer at a mellow age, you can even be more combat efficient than your subordinates half your age! They will respect you not just because you are their senior in rank and age, but also because you are physically more capable.

Depending on the situation, such as whether the criminal you are to apprehend is a mild thief or a hard-core rubber, you can apply an appropriate technique with the right force. For the mild thief, for example, you can capture him with a relatively gentle wrist lock; for the hard-core robber you can fell him unconscious with a palm strike at his neck. After hand-cuffing him you may make him recover his consciousness by massaging certain vital points.

Shaolin Kungfu has the widest range of techniques, and include striking, kicking, felling and "chin-na" that you wish to know and use. "Chin-na" is a special way of gripping, but after the grip your victim can seek someone to release the harm. Many other martial arts are not complete. For example, Judo does not have kicks, and Taekwondo does not have "chin-na".

Besides these physical abilities, Shaolin Kungfu provides you with spiritual qualities like courage, integrity and righteousness which will enable you to become not just a constable to catch criminals but a great policeman to maintain public order and inspire social justice. Some martial arts merely teach you how to bash people.