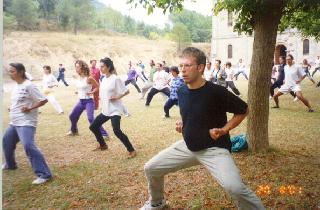 I have a few of your books and I find them amazing. I practise Praying Mantis Kungfu. I am a teenage boy and I will dedicate my life to enlightenment. I am very serious about it.

You do not understand what enlightenment is, to dedicate your life to it. It is not just your age but the questions you ask below that clearly indicate your lack of such understanding. This is no surprise, as most people, including those three times your age and those who claim to be on a spiritual path, do not know what “enlightenment” means.

“Enlightenment” in Buddhist terms is totally different from the usual meaning of “enlightenment” in English. In the English language, “enlightenment” means knowing the reasons behind something. For example, if you know why one should not think I am this or I am that, you are enlightened. It is an intellectual process.

Enlightenment occurs at different levels. At the lowest levels, it is a cosmic glimpse. At this level it is usually referred to as an awakening — awakening to the cosmic fact that reality manifests itself in different dimensions.

Many of my chi kung students have had awakenings or cosmic glimpses. During their chi kung training, some of them experienced that their skin had disappeared, some found they had no physical body, some could see their own internal organs or meridians, and some could see through space and time.

If you trust my words I would advise that if you seriously wish to cultivate towards enlightenment, as a teenage boy your best course of action is to dedicate yourself to your school or university studies as well as to dedicate spending some time each day with your father and mother making their lives happy and meaningful. Enlightenment is still far away, but you are surely on the right path.

The answer is yes or no, yes and no, either yes or no, neither yes nor no. The answer is straight- forward; there is no play of words. If you do not understand the answer, or the question itself, do not worry about it. It means it is not important to you.

Generally speaking, the author who wrote those words above, was either too profound for his readers or himself not knowing what he was writing. He merely reproduced some teachings from past masters, such as from the great Bodhisattva Nagajuna who expounded the doctrine of non- duality.

Also, I notice that my mind is constantly changing. For example I may see something and then be very into that. I may watch a kung fu movie and be very into the Shaolin monks or I may read up on yoga and then I'll be very into yoga, or I'll read up on Taoism and then want to be a Taoist. What can I do to stop the constant wavering of my mind?

This is normal. The Buddha says that the mind of a person is like a monkey, always running here and there. If you mind is absolutely still for a moment, you become a Buddha for that moment. In other words, you attain enlightenment or bodhi in that moment.

That is why Hui Neng, the Sixth Patriarch, says that when a person attains non-thought he becomes a Buddha, when a Buddha has thoughts he becomes an ordinary person. Everyone is a Buddha; it is ignorance defiled by thoughts that prevents him from realizing his Buddhahood.

There are countless methods to stop wondering thoughts, and you can read about these methods from numerous books. Then, why do many people find it hard to stop their thoughts? There are two main reasons.

The techniques to stop thoughts or to focus the mind at one point are actually simple. But the skills need much effort and the guidance of a master to acquire. In my intensive courses, students attain a one-pointed mind or non-thoughts by focusing on their chi kung movements or breathing. In this way many students achieve what other people would call fantastic results, like generating energy flow, directing energy to particular organs, and awakening to cosmic reality such as the examples above. 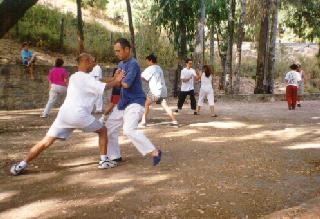 Another important part of traditional kungfu training is combat application. Here students practise Pushing Hands, which is an essential method leading to sparring in Taijiquan training, in a Taijiquan class in August 2001 at Corte de la Frontera in southern Spain.

There is no the only right way or the only wrong way. There are many ways and each one may be right or wrong depending on different individuals and different situations.

If you are already on a right way to spiritual fulfilment, stick to it instead of diverting to other paths whenever someone says his path is better. This is the attitude adapted by Buddhists. That is why Buddhists do not attempt to convert pious Christians, Muslims, Taoists or followers of other religions, because the pious followers are already on their own spiritual paths.

What should one focus on when practicing his kung fu for spiritual development? Should he focus on his thoughts and feelings that come up during practice or just focus on what he is doing so it becomes meditation, or something else?

Later on, when you are quite advanced, you perform your kungfu movements with no-mind, which is all mind. When you have attained this level, you will find your mind clear and sharp, and you experience spiritual joy.

To attain such levels you have to train with a master who himself has attained such levels. If you learn from books or videos, or from someone who does not have the experience himself, you will perform kungfu, including combat application, at only the physical level. Attainments like one- pointed mind and spiritual joy remain as hollow words.

How many times do you suggest one practices his forms?

I reckon that by forms you mean kungfu sets or patterns. It depends on various factors like your developmental stage and your purposes. At the beginning you have to practise your patterns and sets often so that your forms are accurate spontaneously. It is recommended for each training session practise each pattern ten times, and practise each set three times.

At an advanced level, you can do away with pattern practice and set practice, and focus on force development and combat application. You can practise your sets once a while to remember them.

Also, can you give any tips to deal with the pain of the horse stance?

Although kungfu training is very demanding, it should not be painful. Indeed, feeling of pain indicates that you have practised wrongly. However, especially if you have not been exercising for some time, your body may be arching all over.

A very good piece of advice for horse stance training is to be relaxed at all times. This is simple, but may not be easy. Once you can relax — physically, emotionally and mentally — you can remain at the horse stance for a long time without feeling tired. You will also savour some of its subtle joys. 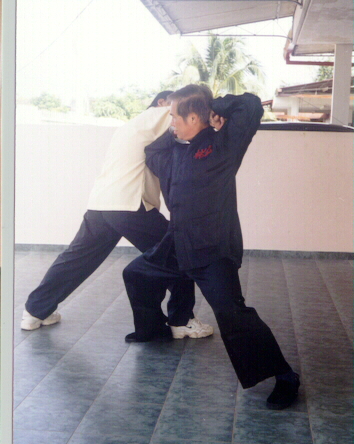 Our school, Shaolin Wahnam, is one of a very Shaolin schools today that teach applying Shaolin patterns for combat

I have many questions. It seems that when one is answered another comes up. Will my practice spontaneously bring answers and understanding or is it necessary to ask questions?

If you practise correctly, your practice will often bring answers and understanding spontaneously. For example, you will realize from direct experience why being relaxed in your horse stance you can develop internal force and also savour subtle joys. You may be unable to explain this in words, but you will understand intuitively.

On the other hand, there are situations where it is necessary to ask. For example, without asking me about the horse stance, you may never know that being relax in its training brings internal force and subtle joys. In your ignorance you may practise and practise, yet not only you do not have benefits you may encounter adverse side effects.

I study kung fu for around 5 years. I have a problem with my right shoulder which I injured in sparring. It became dislocated and I have had problems with it since then. Is it possible that you could recommend some help for me? My doctor recommends surgery but I'm not too sure about this at all.

The problem of your once dislocated shoulder is due to dead cells still lodged within the tissues of your shoulder. If you apply medicated wine or have an injection, it may relieve pain only temporarily, as the dead cells are not cleared. In my opinion, surgery is not suitable; it cannot remove the dead cells which are the cause of your problem.

I would like some general information on two different types of kung-fu, Ng Mei and Mi Tsung.

Ng Mui Kungfu was named after the female Shaolin grandmaster, the Venerable Ng Mui, who was a nun. “Ng Mui” is in Cantonese pronunciation, in Mandarin it is “Wu Mei”. Ng Mui's favourite disciple was Yim Wing Choon, the founder of Wing Choon Kungfu.

Ng Mui Kungfu is suitable for the small sized against the big and strong. Its movements are deceptive and its footwork agile. It is well known for its phoenix-eye fist which attacks vital points, and the no-shadow kick which attacks the external sex organs. The kungfu set reputed to be Ng Mui's favourite was “Fa Khuen” or “Flower Set”.

I am just beginning Shaolin Kungfu training. The reason I chose to follow the Shaolin forms, is that all the other teachers I've seen, miss the importance of combat skills and seem to be more like a gymnastics coach than a Shifu.

However, I find it very difficult to learn from books and videos because of the lack of angles presented in these mediums, and without an instructor I find myself making common mistakes that need pointing out. I am very interested in learning but I am a student and cannot travel from my hometown. What is your recommendation?

Unfortunately most teachers teaching Shaolin as well as other styles of kungfu today, teach only the outward forms. It is very difficult to find good teachers teaching kungfu application and internal force development, the two hallmarks of genuine kungfu.

If you are a beginner, it is very difficult to have good results learning from books or videos. Even learning the external forms itself is difficult, leave aside internal force and combat application. The best way of course is to learn from a master who teaches genuine kungfu. But if this is not feasible, a poor substitute is to learn from instructors who teach external kungfu forms.

In this way you are sure that at least you can get your forms correct. If you learn from books or videos, you may not even achieve this purpose.

Meanwhile read some good kungfu books by established masters, and try to put into practice what the masters advise. My book, “The Art of Shaolin Kung Fu”, will be very helpful.

When your forms are accurate, work out with your kungfu friends the combat application given in these books. You will get more benefit if you progress slowly, familiarizing yourself with one sequence before attempting another, instead of going over all the sequences at once.

You can also try some force training if the instructions in the books are clear, and if the masters mention that it is safe. But when a master warns that certain exercises should not be attempted without proper supervision, it is only sensible to follow the advice.

When you have some sound foundation, but not before, attend my Intensive Shaolin Kungfu Course. You can be sure that your time and money spent are worthwhile.