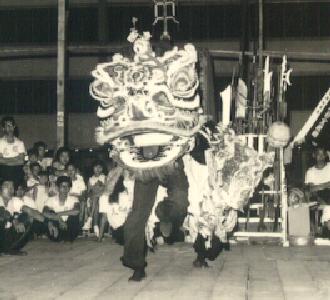 I have had only a few years experience in Kung Fu, but as the masters only concentrated on demonstrations and showy forms I didn't reap the rewards of such a fine art that has been developed over thousands of years. However I have to say that the time available to practice in this day and age is very limited and we can never hope to achieve that great levels of the great masters. All one could hope is to attain a sufficient level to protect oneself.

Lack of time for devoted training is one reason why the standard of kungfu today is so far below that of the past. There are many other reasons.

Another reason is that of attitude. People today do not have the patience and perseverance of those in the past. They also do not show the same type of respect past students showed to their teachers, which was crucial for providing the culture and mind set conducive for kungfu deepening. Modern people are in a hurry to become teachers themselves, without first becoming good students.

A third reason is that while kungfu training served an important need in the past, today it is only a hobby. In any art, be it kungfu, football or painting, there is a wide gap of standard between the professionals and the amateurs.

But to me the most important reason is that kungfu today has lost its essence, and has become dance or gymnastics. Even if you spent a whole life time training it devotedly, you would become an excellent dancer or gymnast, but not even a mediocre kungfu practitioner.

I have also learnt a bit of Taekwando and other forms of Boxing, and I agree that these arts are only suitable in today's standards because of time restraints of our fast paced society. However I still believe that the internal arts are much better martial arts if you have the time and the patience.

I disagree with your observation concerning the time factor as well as patience. If all other things were equal, the one training in genuine kungfu would be better than the other training in external arts, irrespective of whether they have trained for three days or thirty years.

Even if the Taiji student had a lot of time and patience, after twenty years dancing he would still be no match against a Taekwondo or Western Boxing student who had trained for just six months. But if he trains genuine Taijiquan instead of Taiji dance for six months, he can be as equally combat effective as his Taekwondo or Western Boxing counterpart. 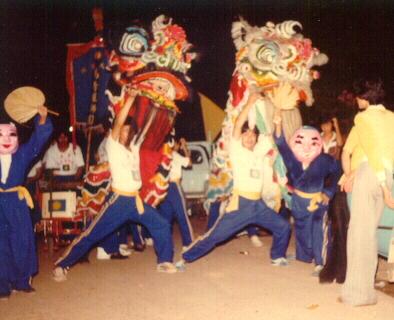 I was wondering for the internal arts how long does one usually have to practice to feel the effects of chi?

All the students who attended my intensive Chi Kung, Shaolin Kungfu or Taijiquan courses, felt chi and its effects on the very first day of their courses. You can read their testimonies in my Comments pages.

The many masters of the old seemed to be quite young when they got their fame, and their punches and kicks were very powerful, but it seems that today when we practice the same arts, it takes 40 - 50 years before one can actually sense our chi and control it.

Many past masters got their fame at middle age, some at old age though they were proficient in combat when they were young. Shaolin grandmasters like Chee Seen, Ng Mui and Pak Mei were not known even at middle age. Shaolin heroes like Hoong Hei Khoon and Lok Ah Choy were known as masters at middle age.

Fong Sai Yoke was an exception. He was a great kungfu fighter when he was only 15, killing a much feared expert called Tiger Loi. Even that, Fong Sai Yoke was not regarded as a master then.

In classical kungfu times, no one would be considered a master until he was past thirty. Before thirty he was just a kungfu lad, though he might be a good fighter. But in terms of internal power, a kungfu lad of thirty would be no where compared to a master of fifty.

The names of the arts may be the same, but the arts as well as the ways they are practised are now very different from those in the past. For example, Hoong Hei Khoon spent hours everyday practising the Horse-riding Stance, but today students may not practise the stance at all. Taijiquan was an internal martial art, but there is nothing internal or martial in the Taiji practised today.

Hence, most people may not feel chi even they may have practised 40-50 years. It is not because it takes more than 40 years of training to feel chi, but simply because they have never learnt how to develop and manage chi. Similarly one may perform stylish movements and call them kungfu, but unless they have actually learnt and practised using those movements to fight, they would never know how to fight even after 50 years of performing these stylish movements.

If you practise genuine chi kung, even if it is of a low level, you should feel chi within six months. If you practise genuine kungfu, even if it is third-class kungfu, you should be able to fight within one year. Virtually everyone who took my intensive course — irrespective of whether it was chi kung, Shaolin Kungfu or Taijiquan — felt chi on the very first day of their training. Feeling chi is nothing fantastic; it just shows you have worked on energy.

Can you please enlighten me as to how chi should feel and what methods can you do to control it into the strikes you do? I am aware that if that is achieved it is very dangerous as using your chi with your strikes can kill. That was one of the reasons why the masters of old, did not teach the art to everyone.

Chi may be felt in many ways, such as warmth, tinkling, expansion, being charged, hot water flowing, and electric current.

For one who can do it, transmitting chi to his hand for a strike is easier done than said. I just transmit it to my hand, like I just walk or talk. Asking me to explain how I walk or talk would be much more difficult than walking or talking.

But for those interested in an academic explanation, a standard method is as follows. Focus your chi at your dan tian. Relax. Use your mind to will the chi to your hand. Facilitate your strike with a shout or with breathing out. Then sink you chi to your dan tian again.

Even if you follow the instruction exactly, you would be unable to accomplish the feat. Why? Simply because what is involved here is a skill, not just a description of a technique. As an analogy, let us take a simple instruction: draw a perfect circle with your left hand. The instruction is straight forward, but it is unlikely you can accomplish the task.

While it is true that masters do not simply teach the skill (not just the method) of striking with chi to any Tom, Dick and Harry because such a strike can be very dangerous, a murderer can also kill in other easier ways, like striking with a sharp pointed object or with a big stone. 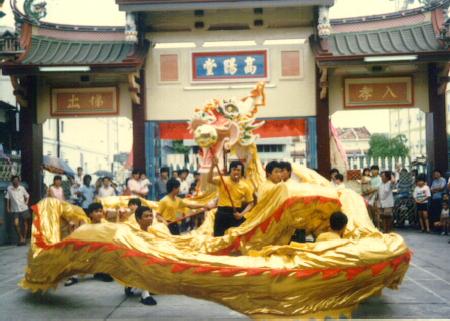 What is the origin of the lion and the dragon dances?

A chieftain in Central Asia presented a pair of lions to a Tang emperor who was very fond of them. Unfortunately, unable to adept to the Chinese climate the lions soon died. The emperor had two lion made of papier muche and cloth, and imperial guards performed them to entertain the emperor. This was the origin of the northern lion dance, which was initially known as the Dance of Peace and Joy, as the Chinese empire then was enjoying a long period of peace and prosperity.

The southern lion dance originated during a period of famine. It was believed that a mystical creature called “nian”, which means “year”, descended from heaven and ate up the crops on earth. A wise Buddhist monk advised kungfu exponents to construct a fierce-looking creature, which is now the southern lion, and perform it with a lot of noise to scarce away the “nian”. Consequently harvests were full and the people prosperous.

I do not know the origin of the dragon dance.

What do the lion and the dragon symbolize in Chinese culture and martial arts?

Both the mystical lion and the dragon are divine creatures bringing good fortune to humankind. A pair of stone lions are often found on both sides of temples, guarding the temples from evil spirits. The dragon is the traditional symbol of emperors, signifying power and benevolence.

The lion, which is not native to China, has comparatively little influence on Chinese martial art. There are only a few kungfu patterns named after the lion.

But the dragon has great influence. Not only there are many patterns and sets, there are also whole systems named after the dragon. Dragon Style Kungfu is a famous example.

Do the different colors of the lion and dragon have meaning?

Yes, in the northern lion dance, the one with a red cloth is male, and the other with a green cloth is female.

What occasions are appropriate for lion and dragon dances?

Lion and dragon dances are performed for celebrations. Lion dance is more common and is suitable for any happy occasions.

Dragon dance, which requires a lot of people and much space, is usually performed when the occasions are significant and involve the public such as a national celebration or the inauguration of an emperor.

Ushering the Chinese New Year is probably the most frequent occasion for lion dance. It is also often seen in opening ceremonies of important conferences, meetings and business organizations.

Why are only the animals lion and dragon used for the dances of martial art schools and not others like the phoenix, crane, or tiger?

Other creatures like the phoenix, the unicorn and many carps are also used for dances. Non-martial art organizations also perform these dances. But there is never a tiger dance, because in Chinese culture the tiger is ferocious and aggressive.

This is no surprise if we understand its background. Lion dance was introduced into kungfu schools only recently in the long history of Chinese kungfu. It was only during the later Qing Dynasty about 200 years ago that the southern lion dance became popular among kungfu schools.

An essential part of lion dance is “cai qing”, or “choy ching” in Cantonese pronunciation, whereby at the climax of the dance the lion devours some vegetable. “Choy ching” is a pun which means taking over the Qing Dynasty. This was a secret password amongst revolutionaries to overthrow the government, and Hoong Ka and Choy-Li-Fatt exponents were the most forward amongst the revolutionaries. But time has changed, and now lion dance is used, as it was initially used, to cerebrate peace and prosperity.

Nowadays lion dance is often performed by students who may not have much kungfu experience. But in the past, especially in an important demonstration, it was usually performed by the master himself and his best students. This was because an informed audience accessed the standard of a kungfu school by observing its lion dance, like how solid were the stances of the performers as well as how agile were their movements.