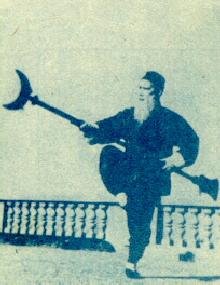 Sifu Wang Zi Ping, one of China's last traditional kungfu masters, was an expert of Changquan or "Long Fist". Here in his 80s and taken before the Cultural Revolution in China in the 1960s, Sifu Wang demonstrated the "Moon-Crescent Spade", a heavy classical weapon. Sifu Wang was one the many traditional kungfu masters who easily defeated foreign masters who came to China to test her martial arts in the early part of the 20th century.

I read in your books that it's best to have a master and that books are a poor substitution. I had stopped practising on my own and started attending lessons. I am now learning in this school teaching Shaolin styles. I can't find a school close enough to where I live that offers only chi kung classes and the classes this school offer emphasize on combat. But I am wondering if it's normal to have a kungfu master and a chi kung master at the same time?

Chi kung is incorporated in traditional kungfu training. Any martial art which does not have chi kung, which is the art of energy management, cannot progress to high levels: they remain at the lower level of physical combat, often using only mechanical strength.

The master says I can only feel the chi myself when the time comes but it's not describable. I know this will take a lot of practising but I am confident that I'll be able to feel it if I practise consistently.

It is true that you can only feel chi when the time comes, i.e. when you have developed your energy or internal force. But when that time will come can vary considerably. If you practise an external martial art, you will have to practise for many years before you can feel chi, and this occurance is an incidental bonus. Many external martial artists, including masters, have never felt chi even though they may have practised for their whole life.

On the other hand, if you practise an internal martial art, like Taijiquan or Baguazhang, you should feel chi after a few months. If you don't, you only practise Taiji dance or Bagua gymnastics, which unfortunately is the norm today. Indeed, dance and gymnastics that pretend to be internal arts are so widespread today that the public often forget that genuine internal arts are, as they were in the past, very rare.

Amazing it may be, if you practise chi kung, Shaolin Kungfu or Taijiquan from me in my intensive courses, you will feel chi in your very first lesson! It is understandable if many people do not believe this is possible. If someone told me this ten years ago, I myself would not believe it. My senior students, who learned from me in regular classes, had to practise for many months before they could feel chi. I myself took a longer time to have the same achievement. Why is this so. It is not because I am now more generous in my teaching, but because at the time I taught my senior students I had not perfected the methods I now use in my intensive courses.

It is significant to mention that my teaching is a transmission of skills, and not merely a listing of techniques. This means even if I write down my teaching instructions accurately and clearly (which I actually have done in my books), students reading and following them exactly will still not acquire the skills. They have to learn from me personally. This is an example that great arts are transmitted from a master to his students heart to heart

My school says the students shouldn't practise any other styles because they might conflict with their styles Can I still go to your chi kung classes while practising kungfu at this school? From what I read it seems that if you advance your chi it would only help with the combat fighting. Is that correct?

If you wish to take my intensive kungfu course, you should have some prior kungfu or other martial art experience. If you are a fresh beginner, you may find the course too overwhelming.

Yes, if you advance your chi, you will also advance your combat efficiency. But this is only one of the many benefits of chi kung. With more energy and better energy management -- these are the inevitable results of chi kung training -- you will be able to do anything better.

What is the history of Long Fist?

Long Fist, or "Changquan" in Chinese, is a general term referring to a group of kungfu styles. There are, therefore, different styles or types of Long Fist. Some famous examples are Huaquan, Chaquan and Baoquan.

The earliest style of Long Fist was Taizu Long Fist, which was about 1000 years ago. "Taizu" means "the First Emperor", and here it refers to the first emperor of the Song Dynasty, who was a Shaolin kungfu master.

Baoquan, or Canon Fist, was demonstrated as a kungfu set by the famous Shaolin monk Yuan Zhong for the first Tang emperor about 1400 years ago. At this time it was part of Shaolin Kungfu. Baoquan became established as an independent Long Fist style much later.

"Fist" in the term "Long Fist" does not refer to a fist; it means kungfu. The adjective "long" is not the opposite of "short", but alludes to waves of the Long River, the name the Chinese call Yangtze Kiang, the longest river of China. Long Fist is therefore the kind of kungfu where the patterns are performed continuously like waves of Yangtze Kiang. 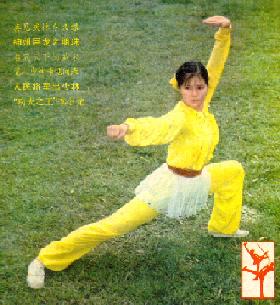 Is this a traditional Shaolin art?

Yi Zhi Chan (One-Finger Zen), Pi Kong Zhang (Strike-Empty Palm) and Shaolin Shen Quan (Shaolin Marvellous Fist) are regarded as the ultimate of martial arts. Using a finger, a palm or a fist, the respective master can seriously injure an opponent from a distance without immediate physical contact. All of these are Shaolin arts.

Whether these very advanced arts are taught at the higher levels of Long Fist or of any other styles of kungfu, depends not on what style of kungfu but on numerous factors like whether the masters know these arts, whether they want to teach, and whether the students are ready for the arts.

Can you give me some brief information on Yi Zhi Chan and Shaolin Shen Quan?

The numbers of steps away, 36, 72 and 108 are just approximations. These numbers are multiples of 18, alluding to the Eighteen Lohan Hands, a fundamental Shaolin chi kung exercise.

Yes, it is -- provided you are training in genuine Long Fist and have access to its highest level. If you merely perform its outward forms, as is done in the modern wushu category called "Long Fist", in terms of self-defence it is inferior to external martial arts like karate and taekwondo. But in terms of demonstration it is superb.

I have heard about certain amazing and mythical feats performed by kungfu masters many centuries ago. I remember such examples as leaping over mountains in a single bound, forcefully pushing people away with wind generated from the chi flow from the hands, and I recall seeing these things in kungfu movies. They were referred to as wuxia, and I want to know the truth behind these claims.

The feats performed by kungfu and chi kung masters are true although many people may not believe them. Those who witness these feats personally would call them miraculous, although they actually follow natural laws and could be repeated by almost any person if he is willing to train hard under a master.

Some examples of these feats include breaking a piece of granite with the head, breaking a few bricks with an apparently gentle tap of the palm, taking weapon attacks on the body without sustaining injury, pushing an opponent back with chi and without physical contact, passing chi through walls, and transmitting chi across a great distance to heal others.

Nevertheless, there are also stuntmen who use tricks which appear like genuine kungfu or chi kung feats. If you, for example, use a brush to draw a line around some bricks with sulphuric acid, you can break those bricks easily. Or if you place your arm on the floor or on a hard table, and place some bricks on your arm, you can break the bricks on your arm without hurting your arm, but giving a false impression that your arm is powerful.

Some of the feats are exaggerated. It is not possible for a master to leap over mountains in a single bound, forcefully push people away with wind generated from chi flow from his hands, or break mountain rocks with chi from his palm like a thunder-bolt, as shown in some far-fetched kungfu movies.

"Wu-xia" were righteousness, chivalrous martial art experts in classical China who often travelled alone over the country righting wrongs. There is no suitable equivalent term in English, but for convenient they may be described as "kungfu knights", but bearing in mind that unlike the Western knights, these "kungfu knights" were not employed by the sovereign. In fact these "kungfu knights" usually disregarded the laws of men, especially when the man-made laws were oppressive, but they were always guided by the unwritten laws of heaven. 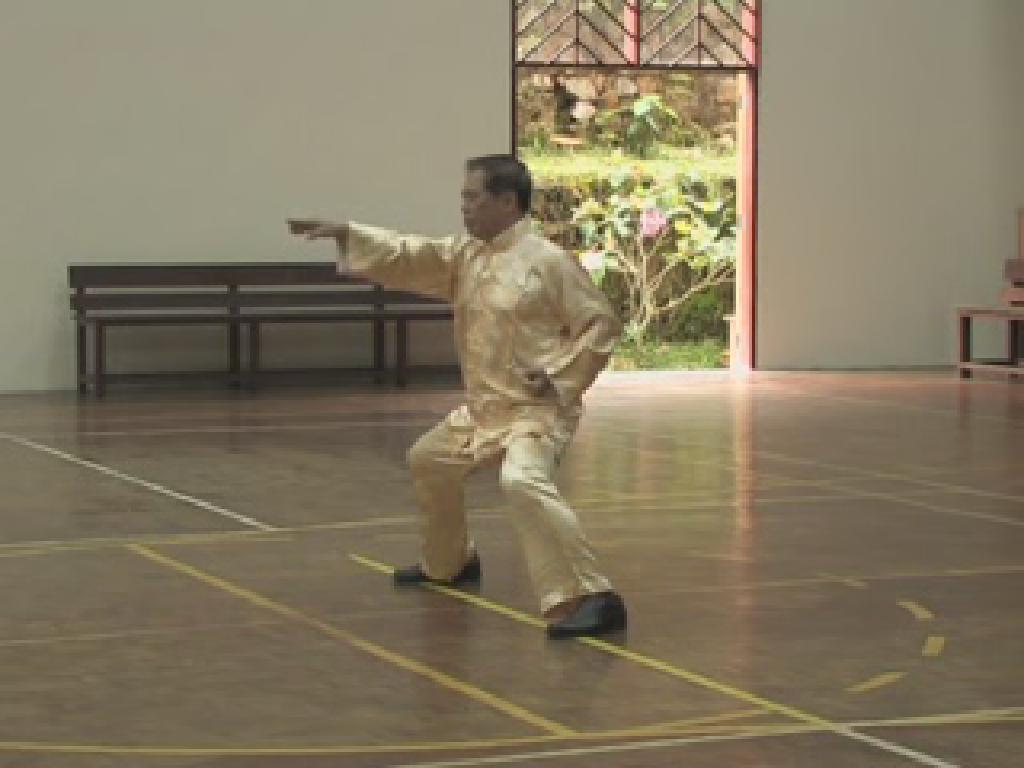 Why is chi kung unable to cure disease like AIDS?

Please take note that I have never said that chi kung is unable to cure diseases like AIDS. On the contrary, I have often mentioned that chi kung can overcome all diseases, including AIDS, and I believe that chi kung is probably the most effective solution to cure AIDS.

What I say is that for various reasons I do not accept AIDS patients as my courses are not suitable for them. This is different from saying that chi kung is unable to cure AIDS. In the same way I have said that my intensive kungfu courses are meant for those who have some prior experience of kungfu or other martial arts. This is different from saying that beginners cannot learn kungfu. Of course beginning students can learn kungfu, just as AID patients may recover from practising chi kung, but they will have to learn from other teachers.

My not accepting AIDS patients is in line with my philosophy that the minimum qualifications of any teacher are to be professional and to be ethical -- in contrast with some teachers who do not actually know what they are teaching, and who simply accept students even though their teaching is useless for the students. If you wish to know the reasons for my not accepting AIDS patients, please refer to May 1999 Part 1 of my question-answer series.

How is Reiki related to chi kung?

In my opinion, comparing reiki to chi kung is like comparing a drop of water to an ocean. Anyone asking me this question, does not know what chi kung is.

This is no slight on him as actually not many people fully realize the scope and depth of chi kung -- many people, including some so-called chi kung teachers, think that chi kung is some sort of gentle exercise, which one may learn from books or videos and then start teaching others.

Are auras connected to chi kung?

As in many other questions, the answer can be "yes" or "no" depending on some variables.

The answer is "no" because in chi kung we do not worry about such topics like what auras are, what the different colours of the auras mean, how to train oneself to see auras, and how one could increase his own aura. The answer is "yes", because when you practise chi kung your aura, which is called chi-field in chi kung terms, will increase.

But why does your aura increase? Is your aura the same as your cat's aura? Why does the aura colour change?